Dolby and Sony are on a mission to revamp your living room (Image credit: Sony)

Dolby Laboratories or Dolby Labs for short, is a name that's synonymous with high-quality audio. Its famous ‘double D' logo can be found on most high-end audio systems, cinema halls, televisions, Blu-ray movies, video-on-demand services and even some smartphones like the Moto One Power (Review). The company is also setting new standards for high quality video content with its Dolby Vision format, which promises richer and more life-like colours. But its core competence remains audio, where its Dolby Digital format and various processing techniques like Dolby Headphone and Dolby Surround to name a few, continues to be used in countless professional and home audio products.

Gadgets 360 had a chance to catch up with Ashim Mathur, Senior Director Marketing, Emerging Markets for Dolby Labs, and Vijay Singh Jaswal, Category Head Audio and Mobile for Sony India, to discuss the current trends in India's home audio segment and how the two companies are teaming up to spread awareness about the importance of having a good speaker setup at home.

“Today if you look at India from a pure broadcast perspective, over 70-80 percent of all the HD channels come with surround sound, but many people don't know that so our thing starts with creating the right awareness,” says Mathur. While TV speakers have improved significantly over the last few years, both Mathur and Jaswal (unsurprisingly) insist that built-in speakers cannot match dedicated speakers or even modern soundbars paired with a sub-woofer. Currently, Sony has a wide range of Dolby Digital certified home theatre systems, with prices starting from as low as Rs. 17,990. 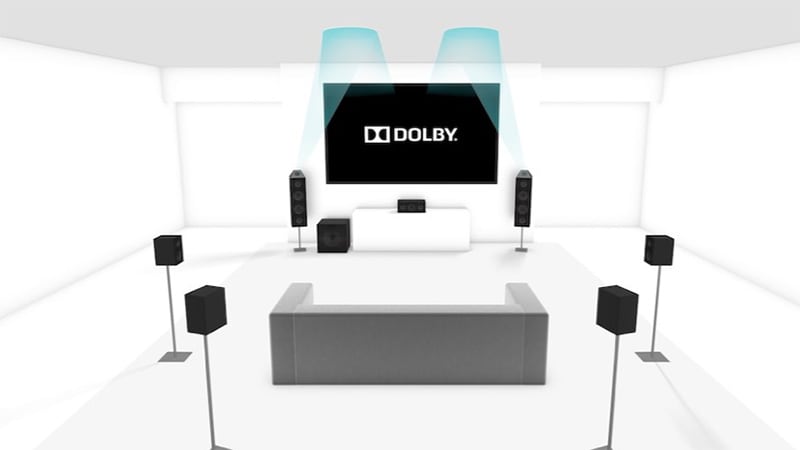 This is the recommended placement for a 7.1.2 Dolby Atmos setup at home (Image credit: Dolby)

Next, we are taken to a special screening room, which had a full blown 5.1 speaker setup as well as Sony's latest Dolby Atmos soundbar. We watched a few minutes of live TV, first on the TV's speakers and then on the multi-channel speaker set up which clearly had better audio. Vocals were more focused from the centre channel while the sub-woofer provided additional support for the low-end frequencies.

The best was saved for last, as we got to audition Sony's HT-ST5000 Dolby Atmos capable soundbar. For those not familiar, Dolby introduced this cinematic audio technology back in 2012 which boasts of ‘overhead' sound, which promises a much more immersive representation of surround sound. What's more, while mixing, Atmos uses object-based audio instead of channel-based audio. You can get a proper Atmos setup at home too, but that will cost you a small fortune. The next best thing to this is an Atmos-certified soundbar, which simulates sound coming from above and around you, due to the strategically placed drivers.

We watched a clip of Spiderman Homecoming, which had surprisingly good positional audio and there were instances where we actually felt the sound travel around the room, despite not having any rear, top or side speakers. The HT-ST5000 is a 7.1.2 channel speaker system, which includes seven drivers that face you, a wireless sub-woofer and a two drivers that are placed on either ends of the soundbar, angled upwards for that ‘overheard' effect.

For the demo, we were sitting smack in the middle of the room so the effect was the most prevalent here. But what happens when you're not in the ‘sweet spot'? Mathur says that it shouldn't affect the experience too much since Atmos doesn't rely on specific channels but can position the audio in pretty much any spot in the room, either with reflecting sound or with dedicated speakers. You generally should be able to feel the effect even if you aren't sitting at the centre point of where the sound would typically converge, he added.

The effectiveness of Atmos will also depend on how your room is setup as it uses the walls and other surfaces to reflect sound off. The system also needs to be calibrated according to the room, for which, Jaswal tells us that the HT-ST5000 has a built-in system which guides you through a on-screen setup process where you need to enter the approximate distance you'll be sitting from the system, placement the soundbar, and other such parameters. There are some restrictions to the ceiling height and room size of course, as it won't work very effective in an open space or even a very large hall. The Sony HT-ST5000 features two additional speakers at each end of the soundbar, to give you that 'overhead' surround effect (Image credit: Sony)

If you've already invested in a 5.1 channel system, then theoretically if would be possible to “upgrade” to Atmos as it would require some additional speakers placed above you, in order to get that 360 degree sound effect. However, Mathur and Jaswal are quick to point out that there are many variables and compatibility hurdles to navigate, which might not make it the easiest or most practical solution. Currently Sony just has a single Atmos ready soundbar, which has a street price of around Rs. 1,09,990, but Jaswal says the company plans on expanding its offerings soon.

We saw an episode of Kaun Banega Crorepati, for example, in a Dolby Digital setup and could immediately appreciate the difference compared to the TV's built-in speakers. Leading English and Hindi channels on Tata Sky, Airtel Digital TV, and other platforms broadcast many shows in Dolby Digital, which means there's no dearth of content for you to enjoy.

Dolby Atmos, the more high-end format, is slowly trickling down from Blu-rays to streaming services. Amazon Prime Video only recently added its first Dolby Atmos show and you can bet that many more should follow suit soon. In India, there aren't any Atmos-ready broadcast shows yet but the more immediate issue at hand, according to Mathur, is educating end-users about surround sound itself so they can take advantage of the existing scheduled programming that already has Dolby audio.

In order to achieve this goal, Mathur believes that the first step towards this is to focus on retail. “There are two [or] three elements that happens at retail. [First] is the training to the people who are standing at the store front. Along with Sony, we've trained hundreds of their store people about the right message, what needs to be communicated, the content availability in layman's terms and how this can enhances their experience at home,” says Mathur. Apart from such elementary measures, Mathur also says that Dolby is continually working with content creators like television channels, OTT services for local as well as global ones, so that more Dolby-ready content keeps coming in, which he hopes will eventually drive adoption of more surround sound systems in the living room.

For Sony, the soundbar segment is one area which is rapidly growing in India. “It is the fastest growing sub-category in the audio segment [for us]. It's practically doubling every year” adds Jaswal. However, despite this, the adoption rate of soundbars against TVs is still pretty low. Jaswal says that for Sony its about 10 percent in India, compared to 30-40 percent adoption rate in other countries like the US. However, looking at the soundbar industry as a whole, the adoption rate is a much lower single digit value, when measured against overall TV sales in the country.

According to Jaswal, Sony is the leading brand for audio in India but the challenge it currently faces is changing the mindset of the average buyer of when it comes to home audio. It's easy to convince someone about the advantage of, say, a 4K TV compared to a full-HD one as the differences are immediately noticeable and easily reproducible at home as well as in a store. Audio on the other hand, especially home theatre systems, are more tricky to demonstrate as this typically involves cordoning off a sizeable chunk of the store for this, which isn't always easy. What's more the experience doesn't necessarily translate to everyone's home as other factors like furniture, the layout of your hall, etc, all come into play.

Mathur agrees, that while it's a big challenge, most users already have a good reference as India currently has one of the highest screens for Dolby Atmos in the world, which means given the right content, he hopes that consumers would want to get that same experience in their living rooms too.

Further reading: Dolby, Sony, Dolby Atmos, soundbar, home theatre
Roydon Cerejo Email Roydon Roydon Cerejo writes about smartphones and laptops for Gadgets 360, out of Mumbai. He is the Deputy Editor (Reviews) at Gadgets 360. He has frequently written about the smartphone and PC industry and also has an interest in photography. With over a decade of experience covering the consumer technology space, he is also an avid sci-fi movie and TV show geek and is always up for good horror flick. Roydon is available at roydon@gadgets360.com, so please send in your leads and tips. More
Realme to Be Available in Offline Retail Market via Reliance Digital, My Jio Stores
iPhone XS, iPhone XR, iPhone X, and More With AirPods Combo Get 10 Percent Cashback With Citibank Credit Cards