Active noise cancellation headphones are a handy companion for tiresome plane journeys, monotonous daily commutes, and when you want to isolate yourself from the clamour around you. Bose's Quiet Comfort range has long been considered the gold standard for noise cancelling headphones, and the QC35 II, which was launched late last year, added Google Assistant support and the ability to switch between three noise cancellation modes to the mix.

Both headphones are priced around the Rs. 30,000 mark, though the Bose QC35 II can be found for less than Rs. 26,000 on e-commerce websites like Amazon. Let's see if Sony's new offering can dethrone the Bose QC35 II from its perch at the top of the noise cancellation ladder.

The Bose QC35 II looks elegant, understated, and classy. The Sony WH-1000XM3 in comparison is more bulky, and has more design flair thanks to the gold Sony logo emblazoned on each ear cup and highlights around the cutouts for the microphones. The Bose QC35 II is available in matte black or matte silver and the Sony WH-1000XM3 is available in black and platinum silver.

Both headphones are made primarily out of plastic, with memory foam ear pads, and ear cups that can swivel and fold inwards for easy storage. The Bose QC35 II features user replaceable ear pads, while the ones on the WH-1000XM3 can only be swapped at Sony's service centres. Build-quality is top notch on both headphones and both do not creak or flex under pressure.

The ear pads on the Sony WH-1000XM3 are plusher, and more generously padded. The Bose QC35 II is lighter and exhibits less clamping force. As a result, it ranks amongst one of the most comfortable headphones out there. We used it for hours at a time and didn't feel any sort of fatigue. If you'll be using headphones for long hours at a stretch, the Bose QC35 II is the one we'd recommend on accord of its light weight. However, the offering from Sony is a great choice for short listening sessions as its ear pads are more plush. 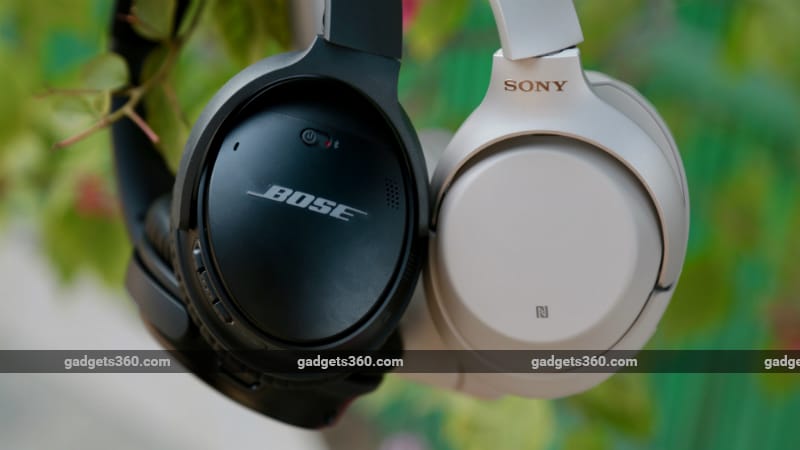 The WH-1000XM3 augments a few physical buttons with swipe controls on the outside of the ear cup, which are used to answer calls and control music playback. You can also hold your hand over the right ear cup to activate the ‘Quick Attention' mode, which drastically reduces the volume and lets in outside noise. The same gesture can also be configured to fire up Google Assistant or Siri, depending on your smartphone of choice, though Alexa is not supported at the moment. There's no mode on the Bose QC35 II which channels ambient sound into the headphones.

The physical buttons on Bose's offering might look dated but are tactile and easy to use. Sony's touch controls feel futuristic and premium but take some getting used to and are unreliable at times. Both headphones can remember up to eight paired devices and the Bose QC35 II can be connected to two of them at the same time. The Sony WH-1000XM3 cannot do that.

Both headphones ship with a hard case, a short charging cable, and an auxiliary cable. The Sony WH-1000XM3 is equipped with a USB-Type C port while the Bose QC35 II makes do with the antiquated Micro-USB port. The WH-1000XM3 also ships with an airplane adapter and the bundled auxiliary cable is much sturdier than the flimsy one Bose provides.

The Sony WH-1000XM3 on the other hand offers 20 different levels. A feature called Ambient Sound Control, which can be triggered via the Sony Headphones Connect application, uses the sensors on your smartphone to detect whether you are walking, running, or just sitting around, and switches between the levels accordingly.

Both headphones can be used as normal passive headphones in wired mode. The Sony WH-1000XM3 has a 3.5mm headphone jack, while the Bose comes with a 2.5mm headphone jack, necessitating the need of a specialised 2.5mm to 3.5mm cable. As long as there is some charge left, you can still use noise-cancellation on both when using the wire. However, without a Bluetooth connection you miss out on some of the advanced features offered by the headphones.

When the battery dies, the headphones work in passive mode and noise cancellation ceases to work. Audio performance is also not the same, as the digital signal processing that is applied when the headphones are powered up is bypassed.

In our experience, with noise cancellation set at medium, the Bose QC35 II lasted around 18 hours on a single charge while the Sony's kept going for an impressive 26-27 hours.

In most situations like the office, coffee shops and long draining commutes, both headphones do a commendable job muting external sounds. Both are stellar but the Sony WH-1000XM3 just slightly outperforms the Bose QC35 II.

With Sony's offering, there is less of the underwater effect associated with noise cancelling headphones and there is much more freedom in terms of customising the level of noise cancellation. The passive noise isolation on the Sony WH-1000XM3 is also superior, thanks to the generously padded ear cups.

Both headphones do not completely silence voices, and tend to do a better job with lower frequency notes. In the middle of a crowded street, Sony's offering did a better job muting the sound of car engines and that of a generator droning in the background.

None of these headphones disappoint when it comes to audio performance, however they have different audio characteristics. The Bose QC35 II has a relatively neutral sound signature, with no frequency overshadowing the other. In comparison, the low-end is slightly pronounced on the Sony WH-1000XM3. Those who prefer a balanced sound will definitely gravitate towards the Bose QC35 II. 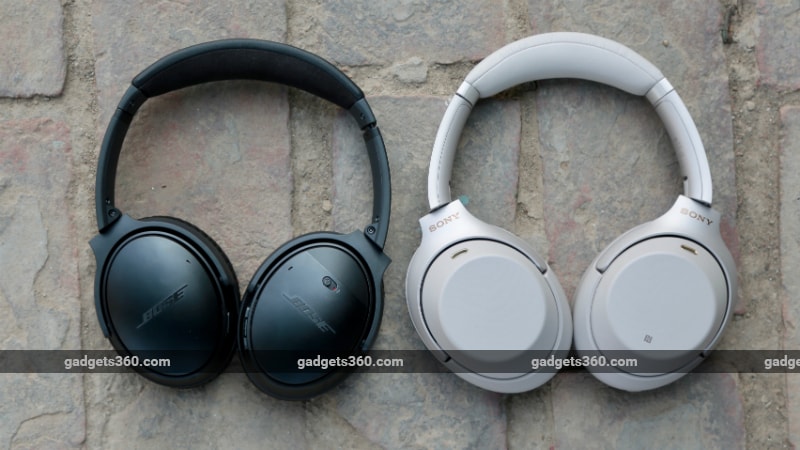 On their own, the Bose QC35 II sound great, with punchy and controlled lows, expressive mids, and great detailing. With the Sony WH-1000XM3 however, the highs have more sparkle, bass is punchier, and the soundstage is wider. On the Bose QC35 II, the highs sound harsh and sibilant in treble-heavy tracks such as Oh Love by Green Day. It's only the mid-range where the QC35 II pulls ahead, as the pronounced bass on the WH-1000MX3 overshadows the mids (especially vocals) in some tracks.

There is very little to choose between the two headphones in terms of clarity and resolution and both are able to handle densely layered recordings like Arcade Fire's Afterlife and Radiohead's Airbag with aplomb.

The Sony WH-1000XM3 supports high-resolution audio codecs such as aptX HD and LDAC, which makes it a better choice for audiophiles. The Bose QC35 II in comparison makes do with SBC and AAC. You can read our in-depth explanation of Bluetooth audio codecs and their respective advantages/ disadvantages to make sense of the subject.

All in all, the Sony WH-1000XM3 might not be as comfortable as the offering from Bose, but it is arguably a notch ahead when it comes to sound quality.

Verdict
Bose has always had the edge when it comes to noise cancelling headphones, but with the WH-1000XM3, Sony has finally pulled ahead. The sound on offer is plush and detailed, with the crisp highs and wide soundstage a particular highlight. The headphones also last longer on a single charge, and the noise cancellation is stellar, and highly customisable.

To give credit where it's due, the Bose QC35 II is lighter and more comfortable, and the hardware buttons are easier to operate than the touch-based controls found on the WH-1000XM3. The bass is also more restrained, and mids more pronounced as a result.

If you want a neutral sound signature, the Bose QC35 II is the one to go for. For everyone else, the more well-rounded headphones from Sony will do the trick.