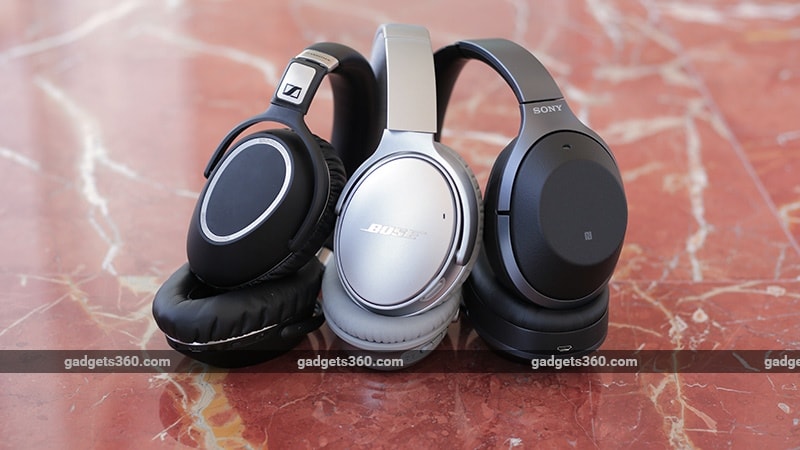 Active noise cancelling headphones are a great tool to have when you need to drown out the background noise and immerse yourself in your music. They are a handy companion for those long road trips or flights when you just need some peace and quiet. If budget isn't a problem though, which is the best one for you? Currently, we can think of three very popular products in the market that might make the cut, namely the Bose QC35 II, the Sony WH-1000XM2, and the Sennheiser PXC 550 Wireless.

All three headphones are flagships of their respective companies and retail for a similar price in India too, which is about Rs. 30,000. Now there's no one-size-fits-all when it comes to headphones as judging audio performance is a highly subjective matter and really depends on how you perceive sound. None of these headphones disappoint when it comes to audio performance, however they do have slightly different audio characteristics which make them different. We'll be taking a look at that, along with what other features they offer, so you can pick the one that suits you best.

Comfort is a crucial factor when picking the right noise cancelling headphone, especially if you'll be using it for long hours at a stretch. All three are built extremely well, with high quality plastics and metal inserts for the headband, which make them feel quite robust. All the ear cups can swivel and fold inwards for easy storage. The PXC 550 Wireless has its power button in the hinge of the right ear cup, so its ready to go as soon as you unfold it, which is neat.

In terms of pure comfort value though, the Bose QC35 II edges out the rest, mostly thanks to its plush ear cups, which offer decent level of breathability so your ears don't feel sweaty after a while. It's also very light at 240 grams, which helps too.

Coming in a close second is the Sennheiser - which at 227 grams is the lightest of the three - as it doesn't clamp down too hard on your ears as the other two. It too has very plush padding for the ear cups. However, it loses out to the Bose because the material used for the inner lining causes you ears to get hot and clammy pretty quickly.

The Sony is fairly comfortable too and the neckband provides slightly better clamping force when you wear them. It is the heaviest of the three headphones though, weighing 275 grams, and the ear cups, while soft, aren't as plush as the other two.

Also worth pointing out - the Bose and Sennheiser feature user replaceable ear pads, which are easily available online. For the Sony however, you'll most likely have to take it down to one of its service centres if you need new pads.

If you'll be using the headphones for long hours at a stretch, the Bose QC35 II is the one we'd pick. The padding on the ear cups are extremely comfortable, they're lightweight and very well built.

When it comes to features, it's hard to beat the Sony WH-1000XM2. Most of them are delivered via the Headphone Connect app (available for both Android and iOS) and the most useful feature that we found is the Adaptive Sound Control. This uses your phones location and motion sensors to detect the type of activity being performed, such as sitting, walking, running, or if you're in a moving vehicle. You can customise the noise cancellation for each preset too and the headphones will automatically switch between them. In practise, we found this to work pretty well. The noise cancellation can also be adjusted based on your altitude, with the new Atmospheric Pressure Optimiser.

Other useful gestures includes QuickAttention, which temporarily disables noise cancellation so you can hear what's around you. The dedicated Ambient Sound button also channels outside sounds into your headphones, which is useful when you're using it on a busy street. Music playback is controlled via a touch panel on the right ear cup, which works well except for maybe the Play/ Pause button which can be little tricky to find at times.

The PCX 550 Wireless also shares similar gestures as the Sony. You can swipe around the right ear cup for controlling your music and a double tap pauses your music and disables noise cancellation so you can focus on the world around you. The Call Enhancement feature makes voice calls sound noticeably bolder and less hollow, while Smart Pause automatically pauses your music once you take the headphones off. Although some more work is needed for the latter feature, we found it randomly pausing our tracks even while wearing the headphones.

The QC35 II doesn't have any transparency feature or fancy touch controls, but good old fashioned buttons do their job. The app does let you share the music you're listening to another compatible Bose headphone and it also supports Google Assistant, which lets you issue commands directly through a press of a dedicated button. It can also read out incoming notifications to you.

All three headphones support NFC for quick pairing and can connect to two devices at once. The Sony lags behind a bit here as even though you can technically connect it two devices at the same time, only one of them can use the A2DP profile for music streaming.

All headphones ship with a carry case, of which the Sony is the sturdiest, followed by Bose, and Sennheiser. You can use all of them as wired headphones too, even when the battery runs out. We appreciate the fact that Sony has gone with a standard 3.5mm headphone socket instead of the 2.5mm on the others. However, the PXC 550's stereo cable also has an in-line microphone, so you can take calls even when it's powered off. Sennheiser and Sony also includes an adapter for use with in-flight entertainment systems.

The Sony WH-1000XM2 is brimming with advanced features and top-notch specs. We love how it's able to effectively adapt the noise cancellation levels to your current activity. It also has support for plenty of high resolution audio codecs which audiophiles will appreciate, and it ships with a good bundle.

Noise cancellation is these headphones' forte and all of them do an excellent job with it. We tested them in different environments and honestly, it's a little hard to pick one over the other in this respect. The Bose and Sony let you switch between different levels of noise cancellation with the press of a button, but the Sony doesn't. The PX550 also has an adaptive mode, which lets you customise the level of NC, while the Sony automatically does this based on your activity.

The Sony WH-1000XM2 has the most extensive high resolution audio codec support, which includes AAC, aptX, aptX HD, and LDAC. The latter is Sony's proprietary codec which can support streaming of 24-bit, 96kHz audio files over Bluetooth, and is the closest competition to Qualcomm's aptX HD code, which can do 24-bit 48kHz. You don't need a Sony phone to take advantage of this either, as Android Oreo now has native support for these formats. High resolution FLAC files sound very good with excellent details in the mid range and tight bass. The headphones do an excellent job even with music streamed from the Internet too, as even at full volume, there's no audible distortion.

The QC35 II's only support AAC for high resolution audio but it still manages to deliver crisp highs and detailed mid range. There's ample bass to be had too and at lower volumes, it's sightly better than what Sony delivers. We noticed mild distortion at full volume in bass heavy tracks but other than that, it performs very well.

Finally, the PXC 550 Wireless is more neutral sounding and supports the aptX streaming codec. High resolution files sound good with good detail in the mid range and crisp highs. Bass lovers might prefer the other two options, but the Sennheiser can churn out punchy and controlled bass. However, we noticed that you have to push the volume pretty high for the drivers to sound their best.

The Sony and Sennheiser manage to deliver excellent battery life as both are capable of hitting nearly 30 hours in most use cases. The Bose isn't bad by any means as 20 hours is still a respectable number and we managed to get close to the claimed time when we tested it.

We feel the Sony WH-1000XM2 edges past the Bose in terms of audio quality and battery life. Noise cancellation is also excellent, although all three are pretty much on the same footing in this respect. Even at the highest volume, the 1000XM2 manages to deliver distortion-free audio, while the codecs like LDAC and aptX HD really let your high resolution audio files shine.

Verdict
All three headphones are a class act when it comes to delivering good noise cancellation performance, audio quality, and features. The Sony WH-1000XM2 is priced at Rs. 30,990, the Bose QC 35 II carries an MRP of 29,363 while the Sennheiser PXC 550 Wireless retails at Rs. 29,990. The Sony WH-1000XM2 stands out among the three simply for the sheer number of features it offers. It supports the most number of higher resolution audio codecs, comes with intelligent noise cancellation optimisations and has a feature-rich app to go with it. If we could change something, we would have liked the ability to have two full-blown simultaneous Bluetooth connections, instead of having to compromise.

If you're looking for the ultimate comfort for long listening sessions then there's really no beating the Bose QC35 II. The plush ear pads really pamper your ears, which is something we really liked. It's also the most generous with bass so if you like that extra bit of thump in your music tracks, then the QC35 II delivers this in spades, across the volume range. Google Assitant integration is also a handy feature to have. We wish it had more advanced features like a transparency mode like the other two have and battery life is a little lesser when compared to Sony and Senheiser.

The PXC 550 Wireless combines some of the best features of both the Bose and Sony. It's the lightest headphone of the lot so its not fatiguing after long sessions and it supports some clever touch gestures and ambient sound mode, just like the Sony. As a bonus, you can also use it over a USB connection as you charge it, in case you forget to carry along the stereo cable. Audio performance is good, leaning more towards the neutral side but for it to sound its best, you need volume needs to be pushed quite high as the mids lose detail at lower volumes. It's also the oldest model of the three so it's most likely due for an upgrade soon.

If we had to pick a single headphone, we'd put our money on the Sony WH-1000XM2 mainly due to its excellent audio performance, wide array of streaming codec support and features like smart gestures and adaptive noise cancellation. The Bose QC35 II comes in a close second as far as audio performance goes, however it's the one we'd recommend if comfort level is higher priority - on a long flight, that could make a world of a difference.