Everyone's AirPods Will Die. We've Got the Trick to Replacing Them.

When your AirPod batteries finally go, even Apple's employees are confused about your options. 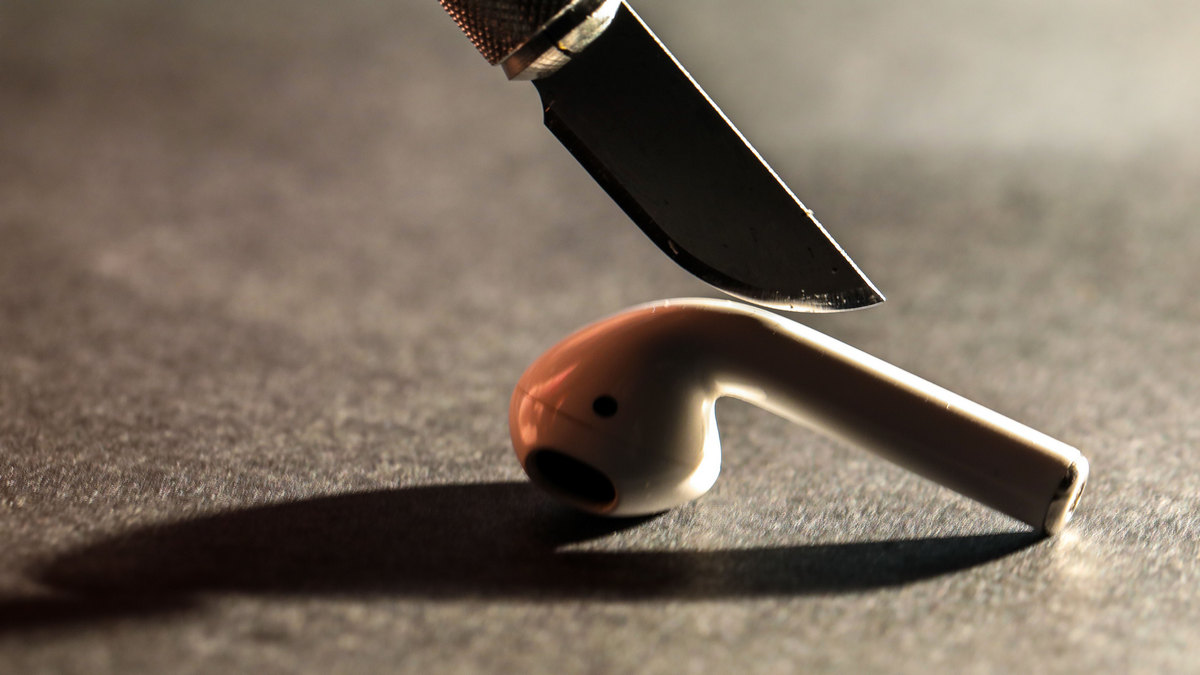 "Sorry, we can't help you," said the Apple store Genius. My AirPods were dying. After just 15 minutes of use, the wireless headphones I use daily chirp a sad little battery-depleted alert. I came to Apple to get them repaired.

The employee said there were lots of people like me, with $159 (roughly Rs. 11,300) AirPods purchased in 2016 and 2017 that now can't hold a charge. But even though Apple promises "battery service," the store had no way to fix my AirPods. It didn't even have a way to test them.

Cupertino, we have a problem: AirPods are comfortable and convenient headphones that have attracted tens of millions of customers. But each one of those white sticks contains a rechargeable battery marching toward an untimely death in as little as two years. Apple's plan to deal with that reality is just to sell us new ear buds. When your AirPods' day comes, the only option is to ask Apple for discounted replacements - but you'll need to know its code word to even get that.

Not long ago, headphones were among the most universal, long-lasting electronics. We shouldn't let Apple turn them into expensive, disposable electronics. It's hurting our wallets - and the environment.

Apple doesn't dispute that the lithium-ion batteries inside AirPods wear out. "All rechargeable batteries have a limited life span and may eventually need to be serviced or recycled," Apple says on its website. Replacing batteries is very common on phones and laptops. In 2018, Apple stores got deluged when the company offered to replace the batteries in older iPhones for $29 (roughly Rs. 2,000).

But with AirPods, Apple offers far less help. First, there's no way to determine the health of the batteries in the ear buds or their charging case. Apple won't even share guidelines on their life expectancy. "AirPods are built to be long-lasting," said Apple spokeswoman Lori Lodes, without specifics. Mine went for 34 months; others have reported they die as soon as 18 months.

When your AirPod batteries finally go, even Apple's employees are confused about your options. Across three separate support encounters in the store and online, they told me I had to buy a replacement pair for $138 (roughly Rs.9,800), nearly the price of a whole new set. But I remembered Apple had once told me it would service depleted batteries for $49 (roughly Rs. 3,500). I reported that in The Post, along with my recommendation to buy AirPods. So what gives?

After weeks of back-and-forth with Apple - and refusing to take no for an answer at the store - I finally got answers:

- If your AirPods are less than a year old and the battery is not performing up to the promised five hours of listening time, an Apple store will replace them at no cost.

- Apple recently began selling its AppleCare+ warranty for $29, which covers the battery, too. But this extended warranty lasts only two years - which wouldn't have been long enough to save my AirPods.

- If your AirPods are out of warranty, Apple will replace them for $49 per stick - so in reality, $98 (roughly Rs. 7,000) total. A replacement for the charging case, which doesn't wear out as quickly, is also $49. The key phrase to say is "battery service." (Apple is providing additional training to customer service representatives on that point, but if you still have trouble, show them this link - or this column.)

A $98 battery fix is still mighty expensive. Apple will replace the battery on an iPhone for as little as $49. An Apple Watch battery costs just $79 (roughly Rs. 5,600). What makes AirPods so different? Because Apple's "battery service" for AirPods is code for "throwing it away." Apple isn't repairing AirPods - it's just replacing the ear buds and recycling your old ones.

To understand why, I performed an autopsy on a dearly departed pair. Inside, I found the design of AirPods makes them inevitably obsolete.

What could be so hard about replacing the battery in an AirPod? I don't ordinarily go CSI on gadgets, so I sought advice from some folks who do.

Kyle Wiens, the CEO of repair website iFixit, offers instructions on how to disassemble electronics and sells replacement parts. The first time Wiens tried to get inside an AirPod, he cut himself and bled all over it. Another time, the battery combusted in a poof of smoke on his team.

AirPods were never meant to be opened, Wiens warned me.

But I wanted to see for myself. With Wiens watching, I began the operation with the silver cap at the end of the AirPod stick. You might think it unscrews to let you get inside. No such luck. It's glued in there, and I couldn't yank it out even after carefully heating the AirPod to loosen the glue. That meant I had to cut in - and to save my fingers, Wiens loaned me a special vibrating knife that slices plastic.

Inside the AirPod, I found so much glue I couldn't even tug out the now-exposed end of the battery with tweezers. So I cut very carefully along the edges of the AirPod stick, to crack open a section like the top of a coconut. There, at last, was the battery, about as thick as a large spaghetti noodle.

I had avoided spilling blood, but after all the cutting I still had a problem: My AirPod was now a Humpty Dumpty in so many pieces I'd never be able to reassemble it again. Wiens said he'd tried this five times, across both the first- and second-generation AirPods, and awarded AirPods a repairability score of zero out of 10. "There is no way we can feasibly understand taking the battery out without completely destroying the AirPod," he said.

I asked Apple whether that was true. It didn't answer.

The cause of death on my AirPods was clear: bad product design.

Earlier this year, the website Vice called AirPods a "tragedy" of disposable wealth. I see them as a symptom of Apple's preoccupation with thin products. It's the tech-world version of fashion's fixation on skinny models, where Apple sets the trend and other manufacturers feel pressure to follow.

Excessive thinness isn't healthy for gadgets, either. Apple's desire to shave a few millimeters off designs has resulted in MacBook keyboards that fail, iPads that catch fire at recycling centres and now millions of AirPods that will probably end up in the trash.

Sealing up electronics with glue instead of screws and latches can help make devices lighter and more resistant to moisture and dust. But great ear buds - even ones tiny enough to sit in your ears - don't have to be impenetrable. iFixit found a way to pop open Samsung's $129 Galaxy Buds, so replacement batteries can slip in kind of like on a watch. Samsung doesn't officially offer this repair option, but iFixit sells a pair of replacement batteries for $29.

Apple's disposable AirPod design is expensive for us. But it's doing permanent damage to our environment. That's not how Apple talks about it, though.

"Apple's products are designed with the environment in mind," said Lodes, the Apple spokeswoman. "Everything from the materials we select to the way we approach recycling is meant to leave the world better than we found it."

How exactly are AirPods designed with the environment in mind? Because you can bring them to Apple to be recycled. "We work closely with our recyclers to ensure AirPods are properly recycled and provide support to recyclers outside of our supply chain as well," said Lodes.

That's like saying your daily paper coffee cup habit is good for the environment because you always put it in the recycling bin. AirPods may actually be worse than that: They're so small, there's isn't much material that can be recycled from them. Significant energy, water and materials go just into the process of making AirPods.

The golden rule for helping the earth is to produce less new stuff. Electronics companies can do that by making their products last as long as possible through repair and reuse - which are all but impossible with AirPods.

In the Greenpeace 2017 Guide to Greener Electronics, Apple got a "B-" grade overall because of its commitments to using renewable energy and efforts to create a closed-loop supply chain. But the environmental group gave Apple a "D" in the category of product life extension, because it has "consistently made it more difficult for customers to repair their devices, replace their batteries, or upgrade the devices so that they continue to stay in use."

Apple isn't the only tech company guilty of pushing consumption over repair. New $130 headphones from Amazon called Echo Buds contain batteries that can't be repaired, the company told me. (Amazon CEO Jeff Bezos owns The Washington Post.) Microsoft says it would also replace an entire unit when the battery fails on its $249 Surface Earbuds.

Before this trend continues, let's agree on a common-sense rule suggested by Wiens: The life span of an expensive, resource-intensive gadget shouldn't be limited to the life span of one consumable component. You wouldn't buy an electric toothbrush where you couldn't replace the brush. Or a car with glued-on tires.

Apple kept fundamentally the same design for AirPods between its first- and second-generation of the headphones, which debuted in March. Now, the Apple rumor mill has lit up with hints of forthcoming third-generation AirPods in pre-release code for iOS 13.2.

Let's hope this time around, AirPods really are "designed with the environment in mind." Not to mention our wallets.