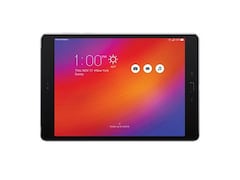 Asus ZenPad Z10 is powered by a hexa-core Qualcomm Snapdragon 650 processor. It comes with 3GB of RAM.