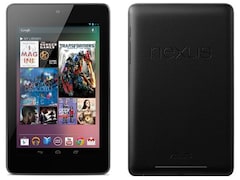 It sports a 1.2-megapixel camera on the front for selfies.

Connectivity options on the Asus Google Nexus 7 include Wi-Fi 802.11 b/g/n. Sensors on the tablet include accelerometer, gyroscope, proximity sensor, and compass/ magnetometer.