With Microsoft Office 2016, the Mac Is No Longer a Second-Class Citizen

Microsoft's new Office apps do a good job of helping us navigate a world in which we frequently switch from one device to another - from a Mac to a Windows PC, with a smartphone or tablet along the way.

The company released Microsoft Office 2016 for Mac on Thursday and new apps for Android phones two weeks ago. New ones for Windows phones and tablets are coming this summer and for Windows PCs this fall. They join apps for iPads, iPhones and Android tablets.

An Office 365 subscription gets you all this - $70 (roughly Rs. 4,440) for a single Mac or Windows PC at a time, or $100 (roughly Rs. 6,340) for five. Mobile apps are free, though a subscription unlocks advance features that most people won't need. Mac and Windows versions are sold the traditional way, too, with a one-time payment, though you can't use Office on another PC without buying it again.

Here's a look at what's available:

Office for Mac
It took five years, but the Mac version of Office no longer feels second-class. The new Office 2016 for Mac is very similar to the existing Windows version, which will get its own Office 2016 update this fall.

Tabs such as "Home," ''Insert" and "Design" are in the same order in both versions, unlike Office 2011 for Mac. The Mac gets various keyboard shortcuts I'm used to on Windows. No longer do I have to navigate menus to get to things I use often. 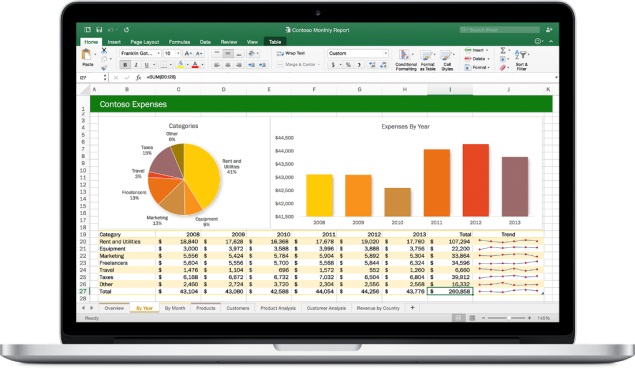 New to Office 2016 is a quick-access sharing button to collaborate more easily. If you keep files on Microsoft's OneDrive storage service, changes made by others will sync with your copy. No more looking for the latest version of a file in email.

Again reflecting the multi-device nature of our lives, the "Recent" button will get you the files you recently opened, regardless of the device (at least if you use OneDrive). And with one click in Word, you can jump to where you left off on the previous device.

For spreadsheets, the new version brings a "Recommended Charts" feature from Windows. You're shown previews of charts that make the most sense for a given data set. For presentations, the Mac gets advanced transitions and other animations previously restricted to Windows.

Those with an Office 365 subscription can get the Mac Office starting Thursday. 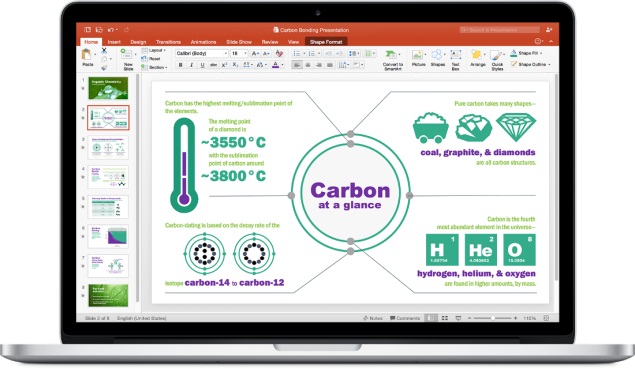 Microsoft will sell Office for a one-time payment starting in September. Prices haven't been announced; previous versions started at $140 (roughly Rs. 8,880) for a base package that doesn't include Outlook.

Word for writing, Excel for spreadsheets, PowerPoint for presentations, Outlook for email and OneNote for organization are available for the Mac and all other devices, while less-used apps such as Publisher and Access are for Windows desktops and laptops only.

Office for Windows
There will be two versions of Office for Windows - PC and mobile. You can run both at once, but I don't recommend it. Sometimes a document will open in one version when I really want the other. Choose one and stick with it.

Office 2013, to be replaced by Office 2016 this fall, is designed for desktops and laptops. While it can also run on tablets, it is better for devices with keyboards and mouse controls.

Mobile versions are designed for tablets and optimized for touch screens. But they can also run on desktops and laptops - at least those that get Windows 10 when the free update comes out July 29. (Windows 10 phones will also get new mobile apps.)

Office on mobile
Mobile apps are complementary rather than substitutes for the PC versions. They have limits, regardless of whether you use Windows, Android or Apple's iOS.

For instance, you can open only one document at a time, making cutting and pasting between documents cumbersome. They aren't meant for writing novels, at least without a physical keyboard accessory. Phones have even fewer features than tablets. 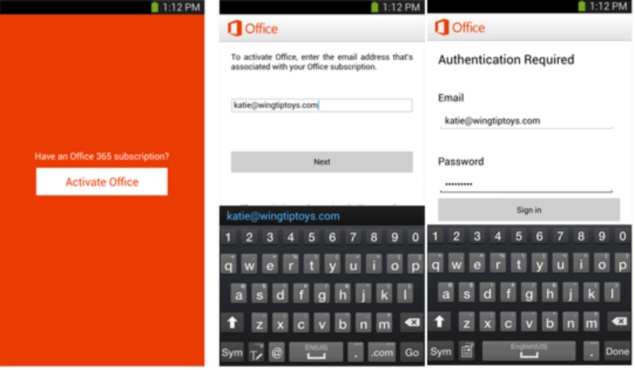 But mobile is great for proofreading and editing existing documents. You can add comments and sync changes across devices through OneDrive. I've turned to the tablet on trains and planes, even when a laptop is in my backpack.

Documents preserve fonts, formatting and page breaks from device to device. Text is tiny when fitting a full page on a phone's screen, but there's a "Reflow" button to temporarily reformat text for the smaller display.

Some devices require manual saving, and locations change for tasks such as search and Excel text wrap. The iPad app is the most complete, though the upcoming one for Windows tablets comes close.

product It took five years, but the Mac version of Office no longer feels second-class.

With Microsoft Office 2016, the Mac Is No Longer a Second-Class Citizen
Comment