WhatsApp Video Calling Is a Good Effort That Needs Some Polish

After months of testing, WhatsApp has finally launched its video calling feature across platforms. At the launch event, the company claimed that video calling has been optimised for emerging markets like India to ensure smooth calling experience even in poor connectivity. WhatsApp video calling is now available via an update to all iPhone, Windows Phone, and Android users, and with this it is now set to compete with the likes of Google Duo, FaceTime, and even Skype.

For iOS users, the update arrived through version 2.16.17, for Android it arrived in version 2.16.352, and for Windows Phone users it arrived in version 2.16.288. WhatsApp video calling will only work once you update your app, so be patient and wait for the update to arrive. A word of caution, links that allegedly claim to activate WhatsApp video calling are going viral on the app. Please note that these links are fake and should not be used at all, as they could potentially be malicious. We've spent some time with the new video calling feature on WhatsApp, and here are our first impressions.

The video calling feature is a seamless addition to WhatsApp, and no big design change was done to integrate the feature. For iOS, the button shows up next to the call button at the top right edge. For Android and Windows Phone users, just pressing the call button now pops up two options - voice call and video call. This minimal design iteration to integrate such a huge change is quite impressive. Pressing the video call button activates the selfie camera and the call will directly go through using Wi-Fi or mobile data connectivity. The call interface is very similar to Duo, with the 'end call' button at the bottom. It is accompanied by the options to switch to back camera and mute audio as well. One big difference that we noticed was that Android and Windows Phone users receive an incoming WhatsApp video call with an interface that shows the view from the user's own front camera, with the option to accept or decline, while iPhone users see it in the form of a notification. Upon clicking the notification and unlocking the phone, WhatsApp then opens up to show the video call and give the options to accept or decline on the iPhone. Also, Duo has a peculiar tone while video calling, but WhatsApp plays the same tune as the one that is set on your phone for normal calls. 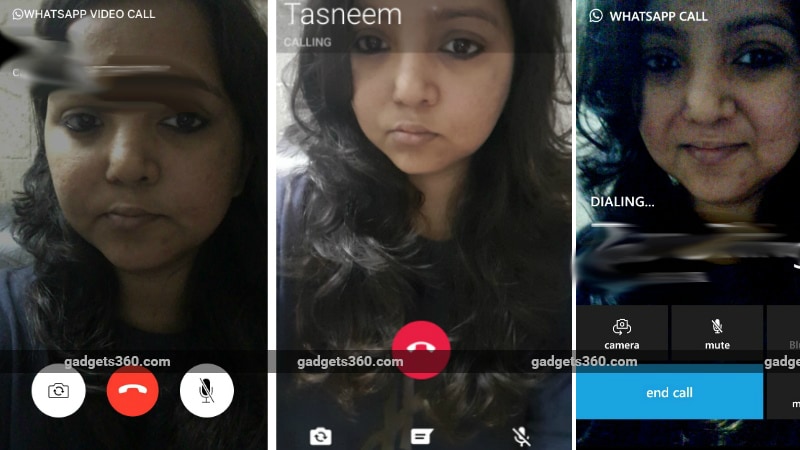 (Also see: How To Get WhatsApp Video Calling Right Now)

WhatsApp video call quality differed depending upon the signal strength. In strong Wi-Fi connections, the call was smooth and seamless, and the video was clear. While using mobile data, the video call quality reduced a little bit, and there was lag in audio as well. During some calls, we even experienced call drops, and temporary video and audio blackouts.

We even tested the amount of data WhatsApp consumes during a video call, and it turns out that it uses an average of 12.74MB of mobile data during a 4-minute video call - which sums up to roughly Rs. 80 paise per minute (we tested on Vodafone 3G networks, and the money and data spent could differ on other networks).

(Also see: How Much Data Does WhatsApp Video Calling Consume Compared to Other Apps?)

Even with the few lags and hiccups, the overall WhatsApp video calling experience is satisfactory. Given that it now caters to around 160 million monthly active users just in India, this initial effort is commendable. Even though the overall experience and data consumption is slightly better optimised on FaceTime, WhatsApp does not fall too far behind. We noticed that WhatsApp video calling lags and audio blackouts are much less, when compared to Duo on similar networks.

The Facebook-owned company took its time to roll out this feature, while the competition had it much earlier. This shows their commitment to making video calling a seamless experience, before making it available to its huge user base.