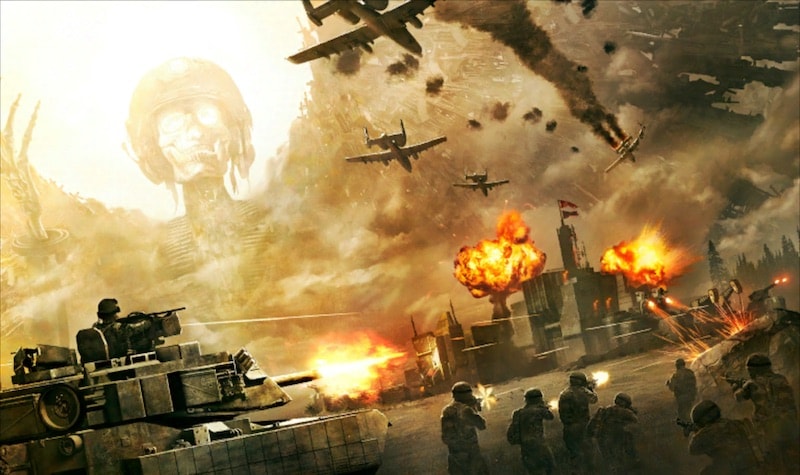 War Commander: Rogue Assault has one of the most uninspiring icons ever. It features a boringly generic soldier with flames in the background, and the screenshots in the App Store don't particularly make it stand out much either.

Once you know that its Creative Director is Louis Castle, co-creator of Command and Conquer, then you start to see the familiar lines in those screenshots, and wonder - could this game actually be a mobile-RTS (Real-Time Strategy) that's as much of a game changer as Command and Conquer?

We spent a week playing the iOS game, and steadily rose up the ranks to control our small army of elite units, wreaking havoc in the region, and at this point, we can safely say that it's an addictive game. Whether it's a good game or not is a more complicated question to answer.

War Commander: Rogue Assault is free to download (with in-app-purchases), and it's only 123MB to begin with. Once you start the game, it checks for an Internet connection - even the single player campaign requires you to be online - and starts to download some assets. At this point, the game occupies the still not unmanageable 263.5MB right now.

Despite the relatively small size, Rogue Assault is a great looking game. You can zoom in and see the detailing on individual tanks and buildings, or zoom out until the clouds float past the screen, so you can see the entire battlefield in a single glance. It moves incredibly smoothly, and zooming in and out didn't affect the frame rate either. This is helped by the fact that individual levels don’t have a lot of elements - the game only has to render one base at a time, and a small number of units.

The audio design is also superb - gunshots, artillery shells, and motors rumbling all sound real, and if you're playing with your headphones on, you'll marvel at the quality of the experience. In terms of production quality, Rogue Assault is definitely top-tier among mobile games.

Unfortunately, Rogue Assault is not really an RTS game - you do build up your base, but that's a slow process that takes several days and is still underway, while actual battles are over in a minute or two. The closest comparison is not Command and Conquer, but Clash of Clans. You could call it a base-defence game, but even that's a generous term.

That being said, Rogue Assault has some features that really clicked with us. For one, there's the fact that you have full control over your troops in battle. Once you begin the engagement, you can take control of an individual unit and move it around as you see fit - you can turn the AI off and manually control everything if you prefer. You can select all your troops together and guide them to targets of your choosing, instead of the default behaviour that appears to choose to attack whatever is nearest.

The level of tactical planning here is limited - different buildings can have garrisoned defenders and there are defensive structures to take out as well, but bringing all your force to bear on them one at a time lets you quickly clear out threats, and it's easy to brute-force your way through battles.

The other aspect of the game is base building, and here, the developers have decided that there are no timers in the game. Typically, for games of this genre, you would have to gather the resources to build a structure, and then start the construction, and then wait - from minutes to hours to even days, depending on the game and how far you've progressed in it.

Developer Kixeye keeps things simple - as long as you have the resources, you can build things right away. This allows you to keep in the flow of the game without arbitrary pauses. And although you can buy gold to pay for things, they can also be purchased with metal, which is the currency you earn in-game.

That sounds really good on paper, but the reality is that the amount of metal you're handed out is really low, even if you go on a dozen successful raids a day. The cost of doing anything at all just shoots up, and you're stuck spending metal like it was water. If you want to play the game without emptying your wallet, you'll be grinding for hours for each little upgrade, which takes some of the fun out of the experience.

You start with a small stash of gold, and you can earn a very small amount from time to time as well - and a little gold goes a long way to speeding up progress. That's why spending real money to buy gold seems like a good option, and you can get 500 gold for Rs. 300, which isn't bad to start with. Rogue Assault is definitely a premium game, and paying something for it is certainly reasonable.

The problem is that - as is the case for games in this genre - there's no upper cap on how much you can spend. The biggest pile of gold you can buy is 14,000 gold, for Rs. 6,200. That's more money than you would spend on a couple of great RTS games for your PC.

That said, the game is definitely addictive. Although there's not much strategy to attacking bases, you'll keep doing it to make your metal counter tick upwards, and for the cards you earn that are used to upgrade different units.

There is a wide variety of units, from infantry to mobile units, armour, and air support. Unlocking and upgrading everything will keep you busy for weeks, if not months, unless you're playing this game obsessively to the exclusion of everything else in life.

There are a lot of different things to upgrade, and it all costs metal (or gold) so you're always working towards an objective, always trying to unlock the next level of turret, barracks, or you're kept busy getting revenge on people who attacked your base.

It's far from an RTS game, but amongst the 'Clans genre' of games, it's a great looking and enjoyable example. On the other hand, if you're looking for an objectively good game, then you might be disappointed.

The gameplay is limited - you're basically just clicking every build button as soon as it becomes available, and base layout doesn't matter too much because everything can be rearranged whenever you feel like. Load up all your units, go on a rampage, take out enemy towers before they do too much damage and then run amok taking down the rest of the enemy's structures.

There's no planning that actually goes into this game, and although you can control the battles directly, you don't need to. You can win the games just watching things play out on their own. Autumn Dynasty is still probably the best take on the genre on mobile right now, but as a whole, RTS as a genre still does not have any must-play mobile games.

Windows Scoop Fans in India to Get Exclusive Updates, Invitations to Events, and More