Sleep++ Is a Free, Automatic Sleep Tracker for the Apple Watch

Apple Watch has become increasingly fitness oriented over the years, but there is one feature that it doesn’t offer — sleep tracking. Sleep tracking is the kind of feature that not everyone needs, but if you've ever felt tired during the day, or had trouble focusing, it could be because of a lack of sleep, and being able to track this can be very helpful. Since the Apple Watch doesn’t have that feature, third-party apps for the Apple Watch such as Sleep++ 3.0 fill that gap.

Sleep++ is a free app that has been around for some time but the latest version brings a much-needed feature to the app - automatic sleep tracking. It’s competing against paid alternatives such as Sleep Watch (Rs. 249) and AutoSleep (Rs. 249), so it definitely is at an advantage thanks to its pricing. I used Sleep++ 3.0 for nine days to find out if it works as advertised.

The prerequisite for using Sleep++ is that you need to be wearing your Apple Watch while asleep. I forgot to wear the watch to bed one night and as a result, missed out on sleep tracking, but I have data for all other days through the app. Enabling automatic sleep tracking just requires the press of a button in the app, so it’s not much of a hassle.

Over the course of nine days, Sleep++ proved itself to be quite adept at recording the time I went to bed. Usually my habit is to go to bed and just fall asleep, so this time is pretty much accurately represented throughout the review period. However, I tend to wake up and spend around an hour just reading news while still in bed. This severely affected Sleep++’s recording of my wake time. There was one day when the app mentions my best sleep time as 06:23 to 07:10 — when I was reading.

The app does give the option to “Trim Night” so you can get rid of these inconsistencies and point it to a more accurate sleep and wake up time. You can also just remove your Apple Watch the moment you wake up, for a more accurate reading. 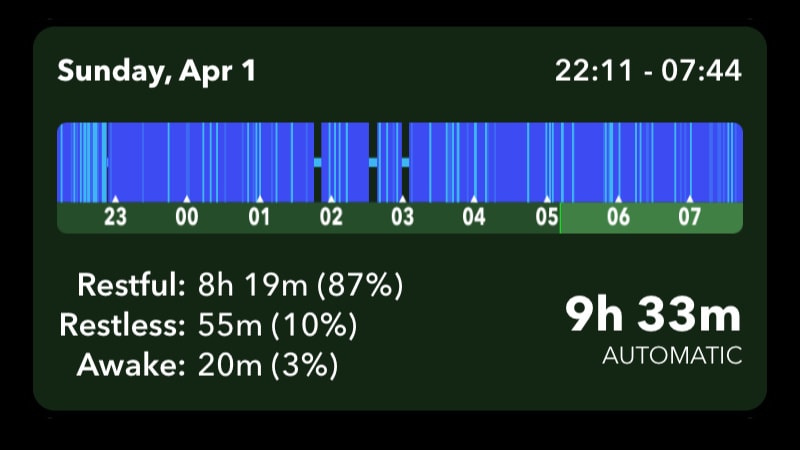 Sleep++ shows you the total time you’ve slept every night, the time you’ve been restful, time you’ve spent restless, and the time you’ve been awake. Some things, such as time spent awake, can’t really be tested unless you have someone watching over you while you’re asleep and recording the time or if you do something more invasive like video recording yourself. Based on how I felt after waking up, I'd agree with the numbers the app showed. It probably should add a graph of how well you’ve slept over a week or month instead of just having daily sleep data.

However, Apple’s Health app already has that, and Sleep++ integrates nicely with it, so perhaps you don’t need to look at Sleep++ at all, after you’re done setting it up the first time. You’ll also have to revert to Apple Health to check heart rate related data, but we think Sleep++ should look at that and try to offer some insights on how well you’ve slept. Competing apps such as Sleep Watch and AutoSleep offer this feature. If you are looking for an app that will be your hub for sleep tracking data, Sleep++ falls short. But if you simply want sleep tracking added to the Health app, then Sleep++ does a great job.

This app has some other nifty features such as a nightly sleep goal, which you can adjust based on your requirements, and a bedtime reminder notification. The latter is also available in Apple’s Clock app for iOS, and it’s just a simple notification that tells you to go to bed. One clever feature is called Morning Sleep Summary, which sends a notification with your sleep data the moment you unlock your phone.

Sleep++ is ad-supported with an in-app purchase worth Rs. 159 to remove ads. We think the app is good enough for most people to use as their primary sleep tracking app on the Apple Watch. The data is reasonably accurate, the integration with Apple Health is great, and it does all of this automatically which is a big plus.

Sleep++ is available on the App Store.

product Sleep++ 3.0 adds automatic sleep tracking to the app, which makes it a must-have for those who have an Apple Watch.
Comments

Further reading: Sleep, Sleep Plus Plus, Sleep Tracking, Apple Watch
Pranay Parab Email Pranay Pranay is in charge of podcasts and videos at Gadgets 360. Over the years, he has helped build the tutorials section of this site from the ground up, got the Guide section off the ground, started two podcasts, written several in-depth features, reviewed fitness gadgets, handled social media and most recently, taken charge of videos as well. He loves travelling, particularly to places not frequented by tourists. He keeps running half-marathons across the country and hopes to complete a full ...More
Panasonic Eluga Ray 550 With 5.7-Inch 'Big View Display' Launched in India: Price, Specifications
MSI GS65 Stealth Thin, GT75 Titan, GE Raider RGB Edition Gaming Laptops Launched in India: Price, Specifications

Sleep++ Is a Free, Automatic Sleep Tracker for the Apple Watch
Comment