Is Sachin Saga VR the Best Way to Relive the Master Blaster’s Career? 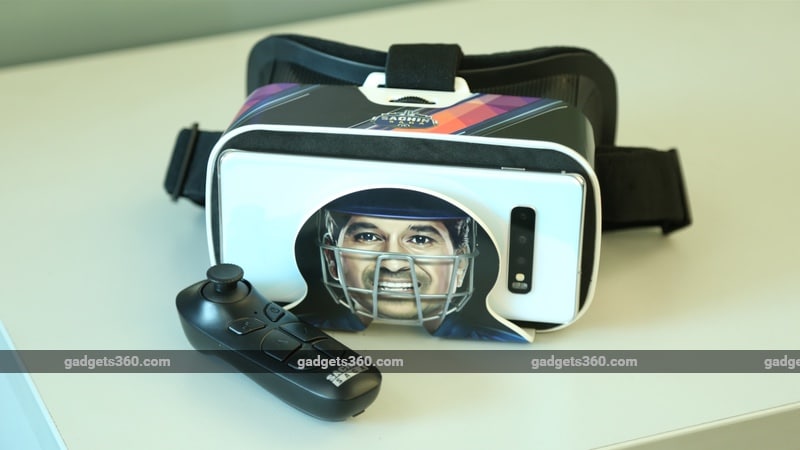 Sachin Saga VR headset price in India is Rs. 1,999. The game can be downloaded for free via Google Play

In a cricket-mad nation such as India, there's always a market for cricket video games. We've reviewed quite a few of these over the years, but none of the games had a licensed cricket player more popular than Sachin Tendulkar, who featured in the free-to-play Android game Sachin Saga Cricket Champions. JetSyntheses, the developers of Sachin Saga Cricket Champions, recently launched Sachin Saga VR on Android along with a VR headset. Sachin Saga VR is perhaps the only Indian cricket game with both a big name license and a VR version as well.

Sachin Saga VR is free to download via Google Play and can be played if you have the Sachin Saga VR headset that also ships with a controller. This combo costs Rs. 1,999. Using the VR headset is really simple. The controller needs two AAA batteries to power it up and once you do, pairing it with a smartphone is very easy.

After this is done, and the game installed on your Android phone, you just need to fire up the game and put the smartphone in the slot provided on the VR headset. There's a pointer in VR mode that just requires you to move your head to point at certain elements on screen, and you can use the top button in the controller to select options.

The controller has an analogue stick, a top button (which looks a bit like a trigger), four game buttons (A, B, X, Y), one mysterious '@' button, and finally the power button. To play Sachin Saga VR, you just need the top button and the analogue stick. This is a fairly simple control scheme and there is nothing complicated about playing the game.

You, of course, play as Sachin Tendulkar and you're tasked with batting — there are no bowling/ fielding modes, and you merely need to move the analogue stick to play shots. How well you hit these shots depends on timing but we felt that a bit of latency mars the experience. There's a short delay between when you move the analogue stick and when the shot gets played in Sachin Saga VR and that is not easy to get used to. Sachin Saga Cricket Champions' touchscreen input response is much more immediate.

There are a truckload of improvements that we'd like to see in Sachin Saga VR. The visuals are strictly average. When you move your head to look around the field, you'll notice that the frame rate isn't high enough to prevent a slight jarring effect. As it is playing any game on a VR headset takes time getting used to, and we felt that poor optimisation in Sachin Saga VR leads to fatigue sooner than it should.

We weren't easily able to pick out fielders in the deep due to poor visuals. The crowds and the fencing behind crowds often appeared to shimmer, which was very distracting. However, if the gameplay had been better, we'd have overlooked some of these issues.

There's a scenario mode in the game where you can play through important moments in Sachin Tendulkar's cricketing career, apart from practice matches and a multiplayer mode. We found that the first-person view in VR didn't add much to the game. Not all modes from Sachin Saga Cricket Champions work in its VR counterpart, but the scenario mode is the highlight of this game and it is present in the VR version.

Sachin Saga VR lacks any kind of a visual cue to tell you that the ball travelled in a certain direction. After you hit a shot, you'll have to turn your head in all directions to guess where the ball is. This leads to precious seconds lost, when you'd otherwise decide whether to start running.

Large on-screen text after every delivery tells you whether you hit a ball too early, missed it, or got perfect timing on your shot. This text was more helpful than any other visual element, which is just disappointing. In a VR game, immersion is everything. In Sachin Saga VR, feeling disoriented and perpetually wondering where the ball went became the norm.

Like we said earlier, this game focuses only on batting, which is acceptable for a VR game. Bowling in VR isn't something we'd like to try unless it involved something more than using a controller — such as physically bowling in the nets and seeing the effects in VR. It's too much to ask for from a smartphone-based VR game.

We weren't able to test this game with other Google Cardboard-based headsets in the market so we couldn't verify whether this game works without this particular headset. However, the Google Play listing for Sachin Saga VR claims that you need the headset and controller combo that JetSyntheses is selling to play this game.

In the short time that we spent playing Sachin Saga VR, we found ourselves wondering who exactly will enjoy this game. Even die-hard Sachin Tendulkar fans will find it hard to justify paying Rs. 1,999 for a sub-par experience. Sachin Saga Cricket Champions is free-to-play and a better game than its VR counterpart, and there are other cricket games which are even better. Sachin Saga VR sounds great in theory but its execution leaves a lot to be desired.