A game that lets you relive the career of Sachin Tendulkar, one of the most prolific batsmen cricket has ever seen, is bound to be extremely popular in India, where the Master Blaster has a massive fan following. The game is free to download for Android and iOS, and when you put all of these elements together, you know that this is a recipe for huge success in India. That was our mindset when we started playing Sachin Saga Cricket Champions, but unfortunately the game isn’t the polished masterpiece that we wanted to see.

Sachin Saga Cricket Champions has the official blessing of the cricketer, which is how the game uses his name and likeness. This is pretty much the biggest selling point of the game, and will draw a lot of people to it. Sachin Saga greets you with a tutorial that briefs you about the basics — a short swipe is a defensive stroke, long swipe is an attacking stroke, and a normal swipe will play a regular stroke. The controls are quite responsive and we faced no issues with them. The game begins in Legend mode, which is where you’ll be replaying famous matches from Sachin’s career. This starts with domestic cricket matches and takes you through his international career.

We really wanted to like this game mode but it got tiring really fast. While each scenario features a different opposition, it began to feel repetitive by the time we reached the tenth scenario. In each case you’ll be tasked with scoring some runs within a specific amount of overs without getting out. Some scenarios will be clearly described as a Test match where Tendulkar batted to earn India a draw, but the target will be something like: “Score 50 runs in 10 overs.” This doesn’t make much sense as ideally the target should be to survive X number of overs to save the match.

In every scenario, the AI bowlers do the same things. There’s no variation in bowling to make you feel like you’re facing entirely different teams. Facing the fearsome pace attack of Pakistan in the 90s should ideally feel a lot different than facing the mediocre bowlers of the Ranji Trophy team of Delhi, but it doesn’t. That’s why this game mode falls flat an hour after you start playing.

You can only play as Tendulkar in this mode and the game takes some generous liberties here. Even if Tendulkar scores one run and goes to the other end, he will face the next delivery, when ideally the non-striker should be doing so. Still, this mode is all about Tendulkar, so it’s acceptable. 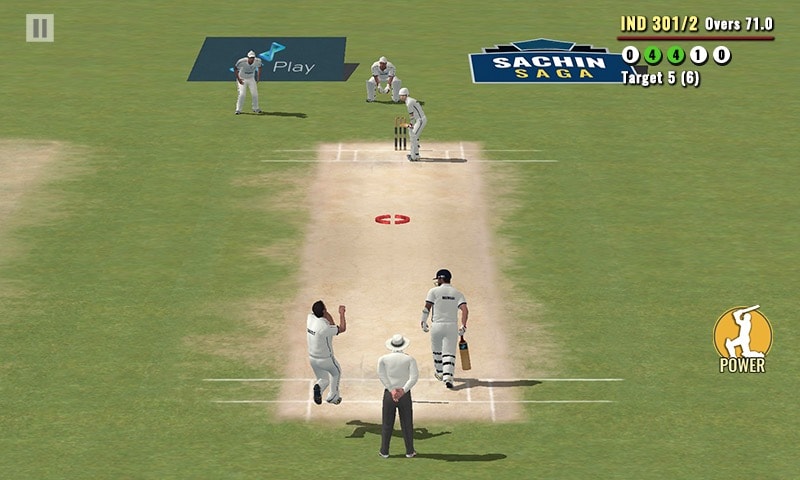 Sachin Saga Cricket Champions also has all the annoying free-to-play elements that we’ve come to expect from the most popular mobile games. Got out? You can watch an unskippable ad to play that ball again. Each legend mode match costs one energy point to play, and the bar recharges whenever you level up, otherwise you get one energy point every 30 minutes. You can buy unlimited energy for 450 gems, which you can purchase for around Rs. 250. The game also has other consumables such as Event Tickets, Coins, and Starter Packs.

That brings us to the Events mode in Sachin Saga Cricket Champions. This is 'inspired' by FIFA Ultimate Team, where you get to pick a squad of 11 players and achieve targets in matches — essentially score a certain number of runs in four overs. Every event lasts for a limited time, such as 48 hours, and if you win the most number of games within that time, then you can top the online leaderboard for big rewards, such as new players, Coins, Event Tickets, and so on. To enter any event, you need Event Tickets, which you can buy using Coins, which you earn in Legend mode (or buy with real money via the in-app store).

It’s easy to guess that to win these rewards, you will have to pay, simply because the top scores are just way too high for people to achieve without paying. Are the rewards really worth it? We don’t think so. This is exactly the kind of thing that makes us suspect that the game was built for maximum monetisation rather than a good gameplay experience.

There are a bunch of things that the Sachin Saga Cricket Champions could’ve featured instead of this Events mode, one of them being bowling. The developers have said that bowling will be added to the game later, but the current state of the game makes us worry whether it’ll be any good. We say this because of numerous technical flaws that we noticed in the game. 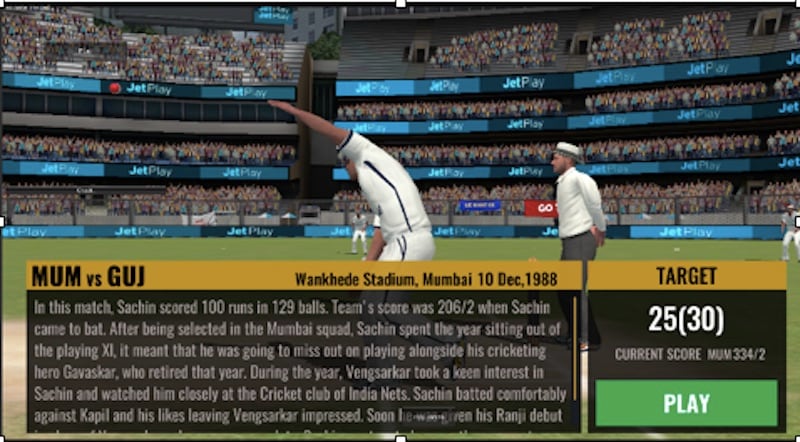 The biggest of these is run-outs. When there’s an appeal for a run-out that gets referred to the third umpire, the game shows a replay on a big screen (full of sponsor logos) in the stadium. The replay doesn’t accurately reflect the batsman’s position at the time of the run-out. When playing the game, many times we noticed that the batsman was too far from the crease in the replay, but much closer during gameplay. Quite a few times, the replay showed a completely different sequence — the batsman had made it to safety before the bails were whipped, but the replay showed him outside and hence he was declared out.

We also noticed that the ball often conveniently teleports itself to the middle of the bat right before you hit some shots. If you pay attention to the ball, you’ll see that it’s often going to miss your bat but somehow you end up timing it perfectly, which is perplexing. There’s another big bug when you’re running between the wickets. Once the batsmen cross the halfway point, hit the Cancel Run button on screen. Both players will return to their original positions and yet you’ll see one run being added to the scoreboard.

The problems don't end there. Commentary sounds good for the first five minutes, and then you’ll realise that there are about ten phrases repeated over and over, which gets annoying really fast. The fielding AI is very bad too as you’ll regularly see fielders running in slow motion behind the ball instead of diving to cut it off. The developers have also used a few shortcuts — fielders will always score a direct hit and they’ll always throw at Tendulkar’s end in the Legend mode. The game doesn’t even have a practice mode where you can improve your batting skills.

All of these things make Sachin Saga Cricket Champions almost feel like a beta build of the game. The game is very buggy, lacks basic features such as a practice mode or bowling, and it gets repetitive way too soon. There are two things this game has done well — getting Sachin Tendulkar’s official license, and throwing in aggressive monetisation tactics. Thanks to the license, this game will likely find a lot of takers but we strongly feel that these players deserve a lot more than the unfinished beta that is Sachin Saga Cricket Champions.

Gadgets 360 played Sachin Saga Cricket Champions on a Samsung Galaxy S8. The game is available for free (with ads and in-app purchases) via Google Play and the App Store.

Further reading: Sachin Saga Cricket Champions, Sachin Saga, Sachin Tendulkar, Cricket, Jetsynthesys, PlayIzzOn, Jetplay, Cricket games Android, Cricket games iPhone, iOS, Android
Pranay Parab Email Pranay Pranay is in charge of podcasts and videos at Gadgets 360. Over the years, he has written over 500 tutorials on iPhone, Android, Windows, and Mac. He has also written in-depth reported features on the intersection of technology and culture, reviewed fitness wearables, been the social media manager, started two podcasts, and produced several tech videos. He loves travelling, particularly to places not frequented by tourists. He keeps running half-marathons across the country and hopes to complete ...More
PS4 Pro vs Xbox One X - Which One Should You Buy?

product Sachin Saga Cricket Champions is a free-to-play cricket game for Android and iOS where you can relive Sachin Tendulkar’s career. 1.5 out of 5 stars