Reigns: Game of Thrones for Android, iOS, and PC is what happens when monarchy by way of Tinder simulator Reigns is set in the Game of Thrones universe. In sharp contrast to the TV show's epic production values, Reigns: Game of Thrones is a spartan affair with minimal character designs and little in the way of gorgeous visuals. Instead, it relies on sharp, concise blurbs of text to hook you in and a simple control scheme that has you swiping left and right on your smartphone to make decisions.

Initially you'll control the fate of Daenerys Targaryen as you choose between giving feast leftovers to dogs or the poor to drastic ones such as summoning a dragon into battle instead of relying on your troops. Eventually you'll find yourself discovering story paths — from finding assassins sent by Cersei Lannister, to getting into a tavern brawl — that keep you swiping left and right to see how events proceed.

The utilitarian approach to gameplay works on the strength of its writing that promises something fresh with every action. Soon enough you'll unlock other characters such as Arya Stark (who takes to the throne by assassinating Cersei Lannister), Jon Snow, and Sansa Stark, to name a few. All of your actions are bookended by visions from the Red Priestess Melisandre, conveniently occupying their place in Game of Thrones lore. 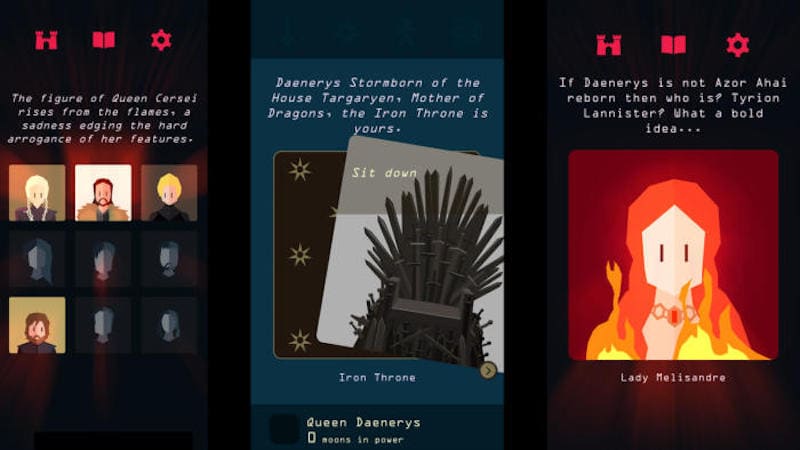 Even if you're not a massive fan of Game of Thrones like this writer, there's more than enough to keep you interested in its rapid fire decision-making process thanks to the aforementioned subplots that keep things interesting. And you're never quite far from the end. Each round of Reigns: Game of Thrones is a couple of minutes as your rule will eventually conclude in dramatic fashion. Be it being assassinated by the Faith of the Seven, or being thrown into a cauldron of wildfire, half of the fun in Reigns: Game of Thrones is seeing how you die.

That said, it isn't without its wrinkles. Just like Reigns and Reigns: Her Majesty, a lot of your decisions are governed by four factors — your citizens, army, wealth, and the Faith of the Seven (in place of the Church in past games). They're represented as bars and if they're full or empty, it's game over. More often than not, we found ourselves forced to abandon certain stories in order to keep playing the game, as pursuing them would've led to the game over screen.

The constant ebb and flow of these factors governs your every move. We felt that we were making choices simply to live to see the next one, depriving us of catching a glimpse of what could have been. However, thanks to it putting you into a new round almost immediately allows for near limitless experimentation and exploration. 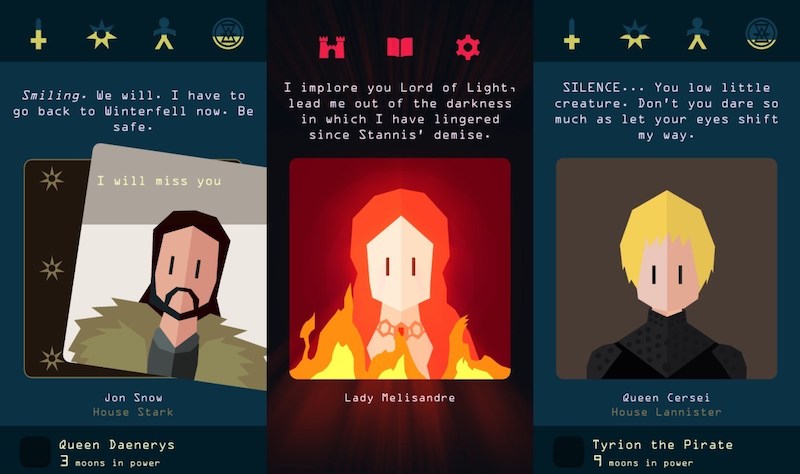 Also, regardless of your selection of ruler, your methods of negotiating with enemies is limited. End up feuding with the Lannisters? No problem, just cut off their line of credit. Have a problem with the Greyjoys? Kill their emissary on the spot or have him join your court. The similarity of choice despite being a different leader makes things a bit predictable.

Sometimes, certain game-changing effects are at odds with each other too. For example, early on in a round we gained the Debtless perk. This allowed us to replenish our treasury no matter what. Two turns later, however, we also gained the Bankruptcy ailment which wipes out our money. These concerns have to do with the procedural nature of the game but they make no sense.