A game set in a post-apocalyptic future where the fate of humanity is unknown, Primordia puts you in the shoes of a humanoid robot called Horatio Nullbuilt. Primordia has been published by Wadjet Eye Games, known for some great point-and-click games such as Gemini Rue and the Blackwell series. All of these games were published on PC in 2012 and last week it was released for iOS, and that’s the version we’re reviewing today.

Primordia starts with Horatio and his tiny floating companion robot Crispin stuck in a remote location after a rogue robot steals their ship's power core. The setting may be bleak but the game tries to lighten up the mood through its characters, who have a good sense of humour that keeps the otherwise desolate setting from feeling too depressing. Horatio is unwilling to go to the nearest city, Metropol, and that is how you find yourself trying to gather parts to restore power to the ship through a point and click puzzle.

This worked well on the PC, but on the small screen of an iPhone 5s it becomes almost painful to play. What’s more, the game's art and graphics look a bit dated - the effect is probably intentional, but in this case they just look bad. We had to crank up brightness to 100 percent to be able to see all the elements on screen clearly.

Low-quality graphics also mean that on-screen text, such as dialogue, becomes very hard to read. This became a big problem the more we played. Since dialogues have no audio, we found it very hard to read anything in-game. There's nothing wrong with the game per se, and we've played and loved Gemini Rue from the same publisher, but on an iPhone, Primordia just doesn't work as well. 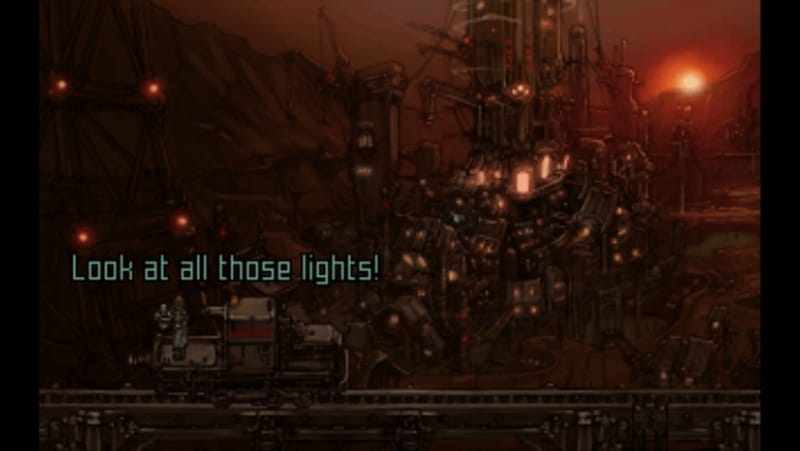 On a PC you'd use your mouse to hover over objects and see if you can interact with them. With an iOS device you have to tap various parts of the screen to see if there are any objects. In case you tap on something interactive, then you get three options - observe, pick up, or see if Crispin can do something to help. All these things translate badly to a touchscreen. The three options are a bit too small on an iPhone and it's hard to tap the correct icon. Similarly there are no cues to suggest whether you can go to the next area by tapping the edge of the screen, or if the exit is blocked.

As a game, Primordia gets a lot of things right, and had we been playing this on a PC, we would be singing its praises. The story gets much better after the initial part where you're searching for the energy core. The larger plot about humans disappearing is intriguing. The puzzles are fun to solve. As with point-and-click games, sometimes solutions are in places you wouldn't expect. The iOS port on the other hand is a disappointment.

There is a lot to love about Primordia but not its iOS version. The PC version of the game is available on Steam and can be run on any computer with Windows XP SP2 and 64MB RAM. We strongly suggest that you pick it up instead of spending Rs. 300 on the iOS version.

LG V20 Goes on Sale This Week; US Pre-Orders Expected to Start October 17