The new version of Office for Apple's tablet is not likely to be a big deal for anyone else. While the apps are beautiful, intuitive and include many familiar functions from the popular desktop version of Office, typing and maneuvering the cursor within documents remains awkward and inefficient.

Microsoft released Office for the iPad on Thursday; nearly four years after Apple launched the groundbreaking tablet. It includes the Word, Excel and PowerPoint apps that will be familiar to both business and everyday people.

Up until now, Office users had to make due with a very basic version designed for smartphones that first launched in June 2013. Competitors like Apple and Google also created similar software for the iPad, but those apps have very basic features and don't always mesh perfectly with Microsoft documents.

Microsoft's new apps are free, but you need an annual subscription to Microsoft's Office 365, which costs between $70 and $100 depending on the version, to do more than just read documents.

By Friday afternoon, the trio of apps occupied the top three spots on the App Store's real time list of most downloaded free apps.

Honestly, the free versions may meet the needs of a lot of people, because displaying documents is one of the most useful functions of the apps.

Pulling up documents is quick and easy, especially if they're stored on a user's OneDrive account, which comes with 20 gigabytes of cloud storage space as part of the Office 365 subscription.

You can shrink or enlarge the type to fit as much or as little of it as you like on your screen. I could fit my entire one-page resume, which is largely written in an eight-point font, on the iPad's screen and still easily read it.

But the iPad Air's super-clear retina display probably helped. And it's worth mentioning that I don't wear glasses. People with impaired vision might have a tougher time. Either way, it's still a big upgrade from looking at the same document on an iPhone screen. 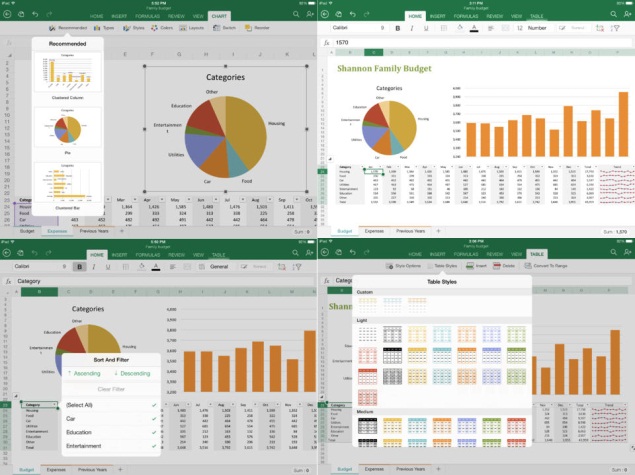 Excel spreadsheets, especially the large ones I viewed, required a little more pinching and stretching to view, because of their larger size, but were still fairly easy to scroll through.

For people who want to take notes or presentation materials into a meeting without dragging along a stack of printouts or a laptop, this is going to be really handy. And if you use OneDrive, it's nice to know you can always have access to your files on a relatively compact and lightweight device.

But is it worth the effort to try to create or edit Office documents on an iPad?

Rather than stripping down Office to a super-basic version, like it did with the smartphone software, Microsoft created a version of Office that's customized for the tablet user and includes many of the bells and whistles of the desktop version.

The app is relatively easy to use and its layout is clean and simple. Word's toolbar at the top lets you do things like change the typeface of fonts and size, highlight text and customize margins and columns. You can also insert page breaks and pictures from your iPad's camera roll or photo stream. There's also a nice selection of compatible fonts to choose from -even Wingdings, if you like that sort of thing. 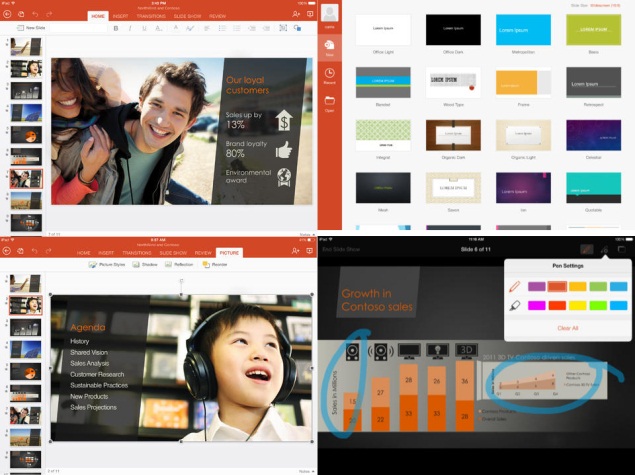 In order to cut and paste and make other changes to text in Word, you have to tap twice on the area you want to update, which brings up a set of scrolling bars, much like in other iOS applications. You can move the bars to select text, then cut copy or paste the selection. It's a little cumbersome and slow, but pretty easy to figure out.

One nice feature is a built-in AutoSave function, which can be disabled if you're worried about data usage. There's also a basic spell checker, with those familiar red and green lines to warn you of potential mistake, but no thesaurus.

Excel functions are also somewhat pared down, but the app displays documents created elsewhere very nicely. All three of the apps come with sets of templates that speed up the creation of basic documents. On-the-go business types will probably love the functionality of the Office apps and eagerly add their iPads to their existing Office 365 subscriptions. But I'm curious how much even people like that will use the apps. Even if you buy a nice keyboard to use with your iPad, it's much faster to create and edit documents on laptop.

Meanwhile, typing on an iPad itself should be reserved for quick edits and desperate situations, no matter how nice an app you're using.

product Microsoft's new apps are free, but you need an annual subscription to Microsoft's Office 365 to do more than just read documents.