Instant messaging (IM) has become a trend these days especially with the youth. A trend, pioneered by the immensely popular WhatsApp IM application, others like Nimbuzz and Samsung's proprietary ChatON messenger are trying to follow suit as well.

The latest entrant in this genre is Hike, a communication app that offers both instant messaging and SMS under one roof. Developed by Bharti Softbank, a 50-50 partnership between India's Bharti Telecom and Japan's Softbank telecom provider, the app is the brainchild of Kavin Bharti Mittal.

A cross platform messenger app, Hike is similar to WhatsApp but is better in the sense that it also allows users to communicate over SMS, which is certainly a big advantage for those who do not have access to mobile Internet or data on the-go and for communicating with your friends without Hike app from within the same app.

That said, we played around with the app a bit on the iOS and Android platforms to see what is refreshing about it that has made it the No.1 Top Free app in the Google Play Store (It is placed at the third position under Top Free apps in the India Apple App Store).

Let the SMS-ing begin!
Hike offers messaging in three different ways. Hike-to-Hike messaging with other phones is unlimited and free worldwide. Second, you can communicate with other smartphone users who don't have Hike via SMS, which is only restricted to India at the moment. Finally, you can message any other phone user via SMS. But beware, if you constantly bug another user with Hike, they are given a code that they can use to block you.

On the bright side, each Hike user gets 100 Free Hike SMS every month to message those friends who aren't on Hike., which gets replenished each month and in case any friend joins the app on your request via SMS, you get 10 Free SMS extra and the company will also be awarding each user with 50 free SMS per month for each friend they have invited to Hike. Other ways of inviting friends are through Facebook, Twitter and email.

Furthermore, Hike users will also be rewarded one-time SMS bonuses of 100 each for connecting to Twitter and Facebook and the company plans to keep offering such bonuses time and again. These one-time bonuses will be valid for life until you run out of them.

Getting started and user interface
The user interface of Hike is very clean, simple and basic with pleasant hues of white and blue. Once you've downloaded the app, you'll be prompted to enter your mobile number. While the iOS version sends a 6-digit verification code via SMS that expires within a minute (reminiscent of Google Authenticator), the Android version simply greets you to the welcome screen asking you to enter your name and complete the registration. This is then followed by a tutorial of the app's basics.

Also, as soon as you enter the app, an Inbox message welcomes you with a reward of Rs.10. Every time you successfully invite a friend via SMS you earn credit of an additional Rs.20. In order for you to earn rewards, your friends must download and activate the app soon after you invite them.

Features and usage
Hike-to-Hike communication via instant messaging has features such as group chat and photo and video sharing, which are right up there with any top smart IM app. Group chats can be initiated by an icon in the top right corner while a '+' icon on the bottom right can be used to send a new message. The app supports various audio and video formats and uploads up to 6MB for each file.

That said, we experienced almost instantaneous responses over a stable Internet connection, especially with group chat that works pretty well and so does the image and video transfer. This is, of course, dependent on Internet connection speeds.

Using the app is fairly simple. The app smoothly integrates your entire existing phone contacts. You can access various menu options such as Home, Invite Friends, Free Messaging and more by swiping left. Swiping right reveals Search bar along with Favourites and Friends on Hike.

We couldn't help but notice this functionality as being very similar to Facebook Messenger. Another feature resembling Facebook's Poke is 'Nudge'. You can 'Nudge' a friend by double tapping anywhere in their conversation screen.

Once you send a message you can see sent (S), delivered (D), read and typing (...) notifications, similar to WhatsApp, which has a different notification convention. Apart from the standard Emojis on your device, Hike has its own set of emoticons for variety.
iOS versus Android

The UI as well as functionality on both platforms is pretty much the same. A word of caution, Android users will not be able to play .mov files sent by iPhone users. The company is aware of the scenario and plans to soon implement a fix soon to convert the video to a universal MP4 file format at their backend so that it can be played on every device.

Other issues include couple of emoji smileys not appearing properly for the iPhone 3GS, Android Hike app unable to open the correct image at times from a clicked thumbnail, multiple file uploads failing on EDGE networks and the "D" and "R" notifications currently unavailable from Hike-to SMS. For Android, the app works only on v2.2 or later, 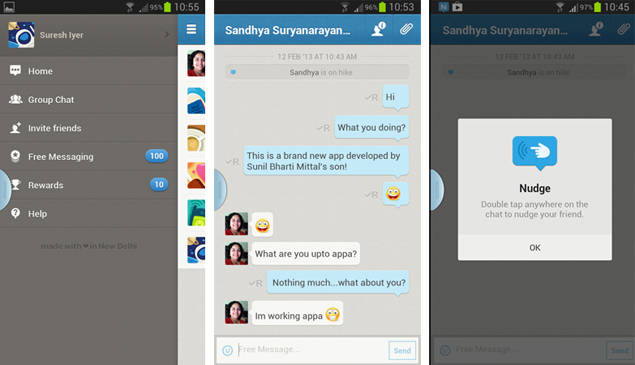 Overall, the app offers a fresh alternative to other instant messaging clients out there and is a welcome addition to the pool. It's true that the app is pretty nascent and does not offer video calling support like Nimbuzz or even voice recording as offered by WhatsApp and ChatON, but it does deliver a quality performance at what it's best - messaging, instant or otherwise.

It is available across all major platforms - Apple, Android, Windows Phone and on various Nokia Asha Full Touch devices namely Asha 305, 306, 308, 309 and 311  (It is expected to launch soon for BlackBerry as well) that will help it gain the much needed attention amongst its current competitors.

Apart from certain issues like we mentioned earlier, the app seems to deliver a holistic user experience. The company has promised to rectify all issues and we hope that the app receives timely updates in the future to offer a more refined experience across all platforms.

The problem with any new closed chatting platform is the lack of users. While almost everyone in our contact list in now on WhatsApp, hardly any users showed up on Hike. We expect this problem to get fixed as more people discover Hike as a compelling alternative. Until then the ability to SMS non-Hike users will sure come in handy. Start Hiking!