Thanks to shows like Kitchen Nightmares, Hell's Kitchen, and Masterchef, Gordon Ramsay is a bona fide celebrity these days. And what's a celebrity to do but to release a clicker mobile game that can rake in the big bucks? Ramsay DASH is based on Diner Dash (remember that game you could not stop playing in 2004?) but with a healthy dose of Ramsay and in-app purchases.

If you laughed at the people who spent real money on Glu's Kim Kardashian app, but you enjoyed Diner Dash and love Gordon Ramsay, then you're pretty quickly going to realise that maybe it wasn't such a weird thing to spend cash on after all. The fact is that the game is fun, extremely addictive, and also kind of evil in the way it's designed to get cash out of your wallet.

Now, once again, the core game is pretty much Diner Dash - it's all about managing timers effectively and setting up large queues of actions. What really sets this game apart is that there is such a healthy dose of Ramsay thrown into the recipe, and that flavour spreads to pretty much every aspect of the game.

Now, if you've followed Ramsay on television, and watched his videos on YouTube to learn how to make simple pastas and eggs the way a world class chef would... well for one thing you're not alone, and for another, you're going to be so badly hooked to this game. 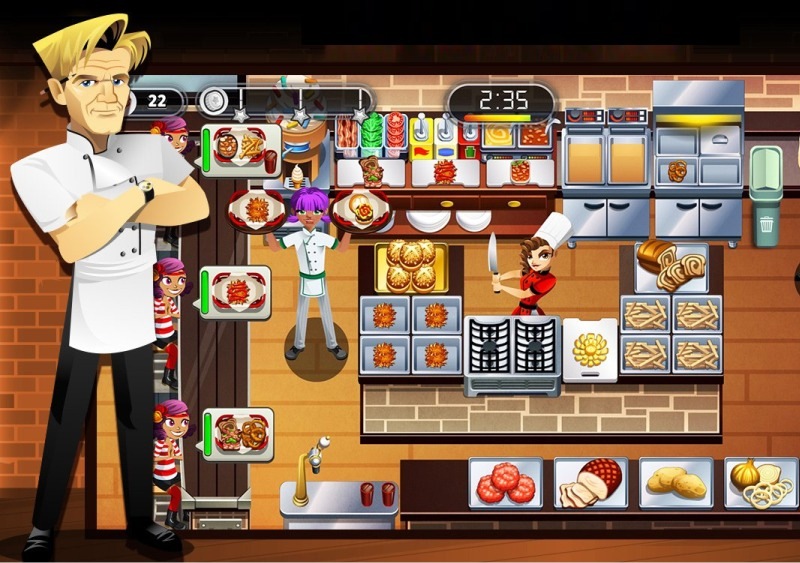 The entire interface is set up like a TV show, and each level that you play is called an episode. These start off with cartoon-Gordon saying something like, "Today, our chef has added a new item to the menu," or "Today, our chef has started serving fried items." He's voiced all his lines in the game, so you'll hear him giving 'helpful' tips, like "People are falling asleep waiting for their food," or "This episode is ending in 3... 2... 1..."

But if you're only familiar with him from American shows like Hell's Kitchen, which feature the famously shout-y side of the chef, then you might be surprised to learn just how encouraging he can be too. The Gordon Ramsay who is there in Ramsay DASH is a nicer version of his Masterchef persona - he's going to scold you, naturally, but he also cheers you on a lot. That's partly because mobile games know that they need to cheer every time we so much as look in their direction, to keep us playing and happy, but knowing that doesn't really take away the charm of listening to Ramsay say, "You're in the zone, you're getting great momentum," after you queue up items in the kitchen.

The kitchen is the game part of the Ramsay DASH. As we said, it's a time management game. That basically means that you have to tap on different things like the meat section to get a burger patty, the turkey station to get some turkey slices, for example.

Then you have to tap the bread to make a turkey sandwich; with the burger, you need to take it to your grill, and then once it's done, you take it to your buns and condiments. There's a drinks dispenser putting out cola, and an ice cream machine, which keep filling up to their limit on a timer, and you can dispense the items as needed. 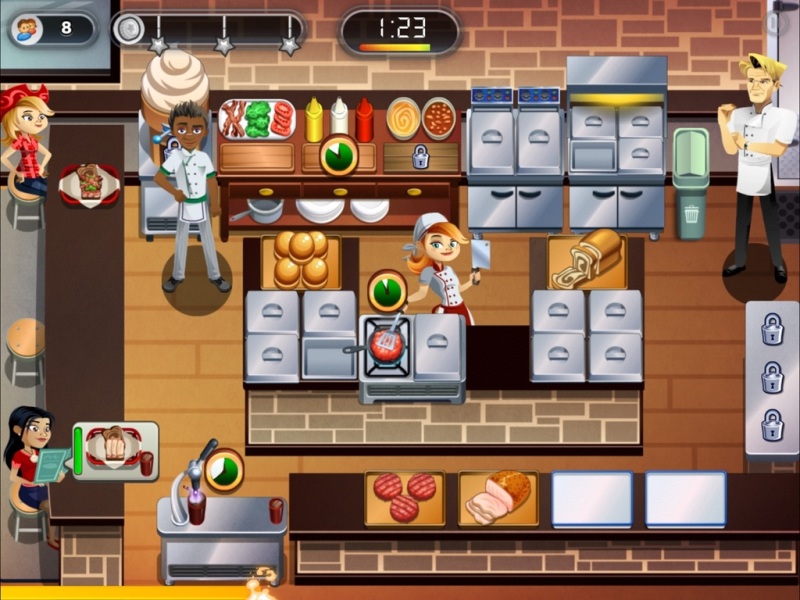 Your customers have their own timers, and the sooner you get them fed, the better the payout you get. That's all there is to the game but it quickly gets a lot more complicated than it sounds. In Season 1, for example, getting a three star rating and heaps of praise from Ramsay was just par for the course. When Season 2 starts, you start to see just how challenging it can get, as you try and balance complicated orders that require multiple steps with simple ones like fried onion rings when, and you're running around with the wrong items filling up your hands because there are no empty storage bins to put them down. The chaos fills up the room and pretty quickly the level is over and you've only got two stars to show for it and Ramsay has pretty much thrown his hands up in despair after all the scolding.

The kitchen part of the game is a lot of fun, and it's based on classic gameplay that has been popular for a long time now. Having Ramsay's voice as a part of the action definitely adds to the appeal, but the rest of Ramsay DASH can be a little annoying.

Other than the kitchen, there's the shop, and different locations to work in - each of these restaurants generates income for you so you need to go to the map screen to look at them from time to time and collect your money.

In the store, you can use the money to buy upgrades - these are pretty much mandatory if you want to progress in the game, because if you don't buy the upgrades you'll have much harder time managing in the kitchen. Other upgrades increase the amount of money you earn from items, making it easier to get a three star rating. 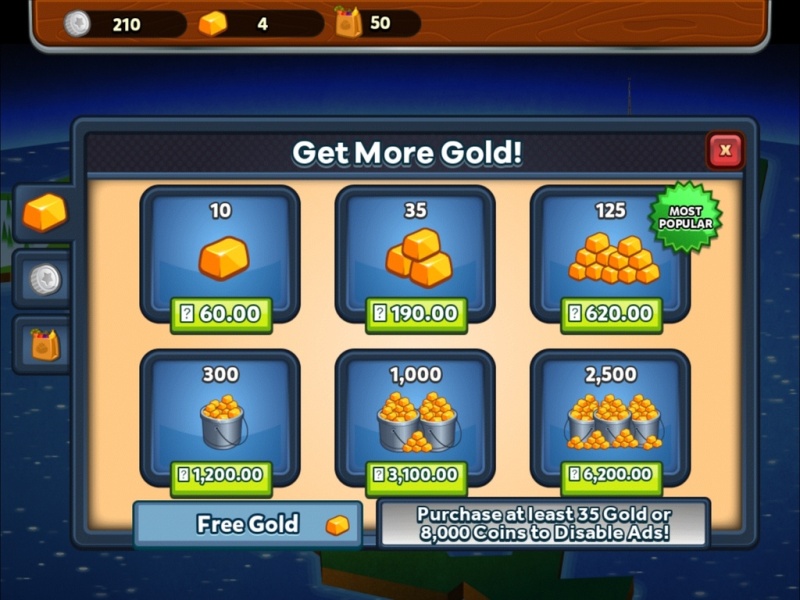 The store starts off cheaply enough, though it quickly escalates, but that's not the only issue with monetisation. As usual, there are a variety of currencies that help to keep things confusing, and you can use these in different places too so it gets easy to lose track.

First of all, there's a level gate on certain items and challenges - you need enough experience points to get this, and the only way to get those is to play the game. Except that playing the game requires supplies - the game's energy currency. Playing a level uses up 10 supplies, and these refill one at a time per minute. You can use gold to refill supplies if you want, but you get only a little gold for completing levels and that's soon required for other upgrades. Of course, you could spend Rs. 60 to get 10 gold and completely refill your supplies. The final currency is coins - the game doles these out fairly generously, but the items you can buy are also much more expensive. Tier one upgrades are a few hundred coins; by tier two it's close to a thousand, and gold as well. Again, you can buy coins using real money - 2,500 coins cost Rs. 60.

At the early stages of the game, you can get a fair bit done without spending any real money, though as the game progresses, being willing to put a little cash down can smooth things over a lot. Like when you really want to upgrade your fryer so that you can store a few extra onion rings between orders, for example, but don't have the time to grind through a level multiple times before you can do that, and it's only Rs. 60, and then you say, why not?

That said, if you're actually willing to put the game away for a while, and aren't too invested in progressing through the game, then you can definitely play without spending money, and it's a really fun way to while away the time.

There are a few other similar games that have different elements that some might prefer, but Ramsay DASH really nails the celebrity aspect of things - the amount of Ramsay that's in the game is just right, a bit more and he'd overpower the game part of things, and a bit less and you might not notice he's there. It's like a well-balanced dish coming out of the kitchen, and while it might not be the healthiest treat, we certainly enjoyed it.Ramsay DASH is free and available on both iOS and Android. Gadgets 360 tested the iOS version of the app.

product The latest celebrity game puts you under the tutelage of celebrity chef Gordon Ramsay. But is it a recipe for success?
Comments