Fantastic Chefs is Indian game studio 99Games’ newest game and just like Star Chef, it’s based in the world of cooking. Fantastic Chefs is a match-three game except that you can match as many adjacent tiles in any direction as you want. This means that it’s easier to make huge combos but it may also dilute the experience by making the game too easy, if it’s not done well. We played over 60 levels of Fantastic Chefs to figure out if it’s the new Candy Crush Saga or yet another clone that doesn’t quite live up to its billing.

Before we speak about the gameplay, we’d like to mention the setting briefly. Yes, that’s right, Fantastic Chefs does have a bit of a back story. You start with one man who’s bored with his corporate job and he starts his own food truck. You can help him make fantastic dishes by collecting the ingredients he needs and levelling him up to increase his cooking speed.

Along the way, he meets several other chefs such as a ballerina who also cooks and a grandma who specialises in making pie. Each of these chefs has a special power such as blasting nearby ingredients to clear the path, turning all adjacent tiles into the same colour, and much more. You need to choose the right crew for each level and remember to level them up or risk getting stuck.

There are different areas such as Mysterious Pyramids, Charming Countryside, and Enchanting World that you unlock every 20 levels or so. New areas bring new challenges such as moving tiles or fungus, which you need to deal with while matching tiles of the same colour. Matching tiles is really simple — just drag your finger across ingredients of the same colour that are adjacent. All of these add an extra layer of challenge to Fantastic Chefs. There are a wide variety of chefs and you can unlock some only by paying in in-game currency initially, but later they become available to you as you progress.

Each of the chefs has a comic strip style introduction that adds some depth to the story and breathes some life into the characters. However we wish that the developers take it a step further and add to these stories as you play along. After the introduction there’s pretty much no story for any character, which prevented us from getting attached to any character for anything other than their abilities in the game. 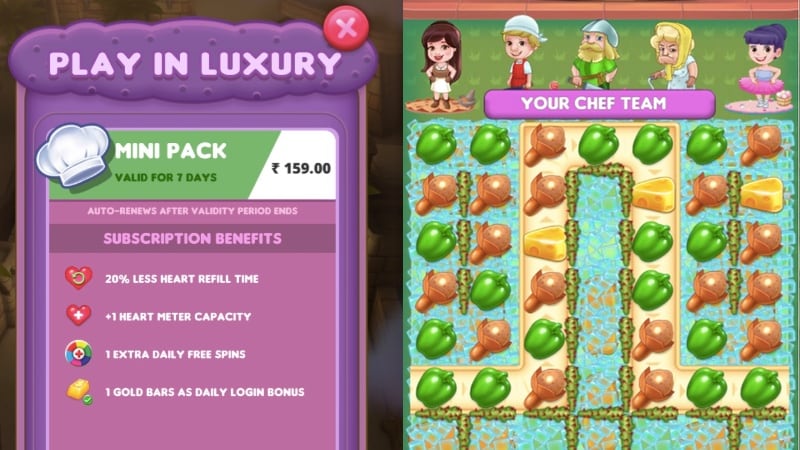 The gameplay in Fantastic Chefs looks simple initially as you get a lot of tiles of the same colour. Matching becomes much more difficult as you play more of the game and you will find yourself struggling to break barriers in each level or to match the right set of ingredients. You can match diagonally, sideways, vertically, and combine all three if you want to create a massive combo. This is important as you only get a limited number of moves within which to complete each level, so bigger combos generally yield better results. We do have one complaint though. It’s quite difficult to rethink your large combo. For instance, we once created a big chain of red ingredients only to see that we missed one right at the beginning. Now we had to swipe all the way back to the beginning to avoid triggering a smaller combo accidentally.

There are different types of goals in this game — one that asks you to collect ingredients of certain colours, one where you will be asked to cook a certain number of dishes, or one where you need to catch special items called Yummies. There are more objectives and these are made clear at the beginning of the level. It’s easy to get distracted and match ingredients of the wrong colour or keep hunting huge combos when all you need to do is catch Yummies. These goals and the changing levels keep Fantastic Chefs feeling fresh. But for a game that’s free to play, the catch is always in the limits it imposes to make you pay.

There are three different types of in-game currency in Fantastic Chefs — stars, gold bars, and wheel spins. You earn stars and gold bars as you progress but you can also buy these with real money. Wheel spins allow you to “win” certain prizes and you’re limited to one spin per day. You can spin the wheel more by paying with gold bars. Another thing that limits you is hearts — you only have five of these and you lose one every time you start a level. Even if you clear it in one go, you still need another heart to start a new level.

The game also has a few ads on the main screen (which prompt you to install a random app or game, and to buy Fantastic Chefs’ subscription) but overall we felt that ads didn’t disrupt the flow of play and that’s great to see. You can get subscriptions starting at Rs. 159 per week that give you extra daily spins, faster heart refills, more hearts, gold bars as a daily login bonus, and extra chefs.

These things limit how fast you can progress in the game and even though they’re standard across free-to-play games, we still don’t like the fact that Fantastic Chefs limits the time you can spend in the game by imposing such restrictions. We feel that the game has got the balance almost right for the developers to make money, but it’s not necessarily one that will allow you to spend hours in the game without worrying about paying. We didn’t like the limited number of hearts you get and the fact that you lose a heart even when retrying levels you’ve failed to clear. 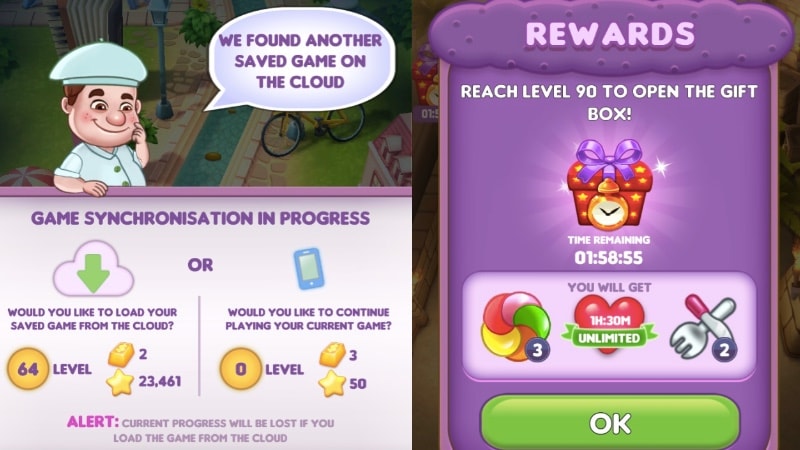 If you get stuck at a level and fail to clear it twice, Fantastic Chefs makes the level much easier. During the third attempt on one such level, we cleared it with around 12 moves remaining, whereas previous attempts had us wishing for at least five extra moves. This made us feel as though the AI was cheating.

When you play a difficult game, you want to have a small chance of victory through highly skilled play. With Fantastic Chefs, we felt as though we were playing against a random number generator that simply reduced the number of possible combos to slow down our progress. Ideally you should be able to match around five to seven tiles even in the difficult games but that’s not the case. In the most difficult levels you will be lucky if you can match three tiles in one move and ultimately you lose all your hearts, which brings out a timer to replenish them and drives you towards buying these hearts.

Fantastic Chefs does have some nice artwork and writing where every character’s description is two lines of rhymes. However, the animations don’t look as slick as the likes of Candy Crush Saga, and some other elements - such as the in-game diary that shows your goals - could look a lot better.

Fantastic Chefs does have a really nice core loop which had us hooked to the game, but we’ve grown tired of the monetisation tactics of most free-to-play games and that prevented us from enjoying this game a lot more. This game’s artwork is pretty good and so is the gameplay, but its AI needs work. We’re surprised to see a match-three game that’s still fun to play and we think Fantastic Chefs is worth playing even though it has its share of weaknesses.

Gadgets 360 played Fantastic Chefs on the iPhone 7. The game is available via the App Store and Google Play as a free download with in-app purchases

product Star Chefs developer 99Games is out with a new match-three game called Fantastic Chefs. We review to find out if it’s any good.
Comments

Further reading: Fantastic Chefs, 99Games
Pranay Parab Email Pranay Pranay is in charge of podcasts and videos at Gadgets 360. Over the years, he has helped build the tutorials section of this site from the ground up, got the Guide section off the ground, started two podcasts, written several in-depth features, reviewed fitness gadgets, handled social media and most recently, taken charge of videos as well. He loves travelling, particularly to places not frequented by tourists. He keeps running half-marathons across the country and hopes to complete a full ...More
Redmi 6 Pro Launch, Jio Monsoon Offer, WhatsApp's New Features, and More News This Week
Tesla Said to Hit Model 3 Manufacturing Target Hours After Deadline