Drupe Lets You Send GIFs While Making Calls. The Best Thing Ever?

Making calls is a fairly straightforward feature of phones that hasn't changed much over the years. Smartphones shook things up a little, with smart replacements for dialler apps on Android. Companies like Truecaller combined caller ID and diallers, which was a useful functional update, but otherwise most dialler apps don't really do enough to justify installing.

The ones that stand out in terms of design and features usually involve a compromise in terms of usability. One exception is Drupe, which stands out because its interface is unique, but the dialler remains highly functional. So when we found out a few days ago that the dialler has added a new feature allowing you to send GIFs to the people you're calling, we knew we had to check it out again and see how it all holds up.

The addition of the GIF functionality is supposed to add a bit of useful context to the call, so it's not just fun, but also functional. So if you're calling a friend to find out if they're free for coffee, you could add a GIF like the one below to set the mood.

Drupe shows you your contacts in a column on the left, and a column on the right shows the icons of different social networks. Along with these, are icons for calls, GIF calls, and messages. Just drag a person's face from the left column to an icon in the column on the right and you can make a call, or send a WhatsApp message, or Twitter DM. Similarly, just drag a contact's icon to the GIF call icon, and it'll start the call. At the same time, you'll see categories of GIFs you can browse or you can search for a specific GIF.

Just tap the GIF you want to use, and it gets added to the call, so the person you're calling can see what you sent. Of course, the person you're calling must also have Drupe on their phone, which would greatly limit the usability of this feature, but given how popular GIFs are getting these days, it might be a convincing enough reason to get your friends who are also on Android to give the app a try. 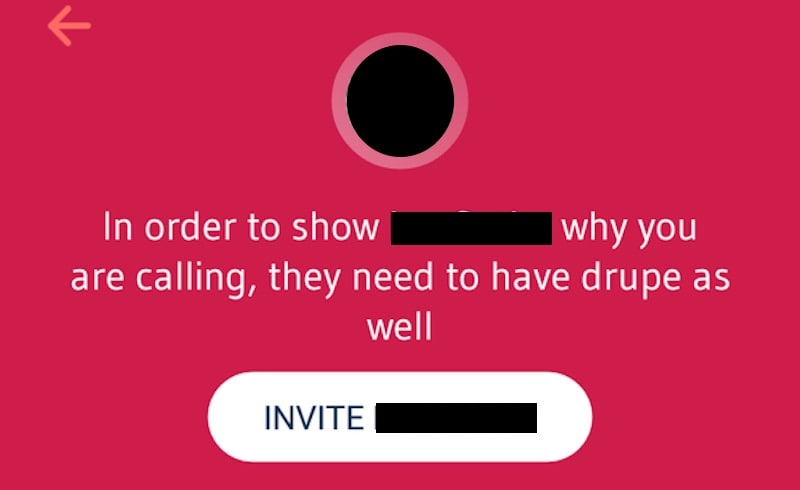 As mentioned above, the app has a number of other useful features too. The dialler lets you make calls or send WhatsApp messages or calendar requests with a single swipe, and highlights the people you're most frequently in touch with for quicker use.

The linkages with Drupe are pretty wide ranging as well - all the common social networks are available to add as links, so you can quickly swipe to start a Skype call or send a message using Telegram, so you can manage your social presence through just your dialler. In this way, it's like a hub for launching any kind of conversation - in a way, it's a little similar to the BlackBerry Hub on BlackBerry OS 10 devices. The Hub collated all your conversations across different services into a single place, and made it easy to launch into different conversations easily. Drupe doesn't quite do as much, but instead of having to hunt out different apps to chat with your friends, you can launch just one and then go from there.

At the same time, you can use the number-pad to enter either a name or a phone number, which covers the basic functionality of your typical dialler, and Drupe also comes with a built in call recorder, which is very handy for some people. It worked as described on our phone, but apparently some devices do block access to the speaker, preventing it from recording. Drupe suggests using the loudspeaker if your device isn't allowing recording to get around the limitations. 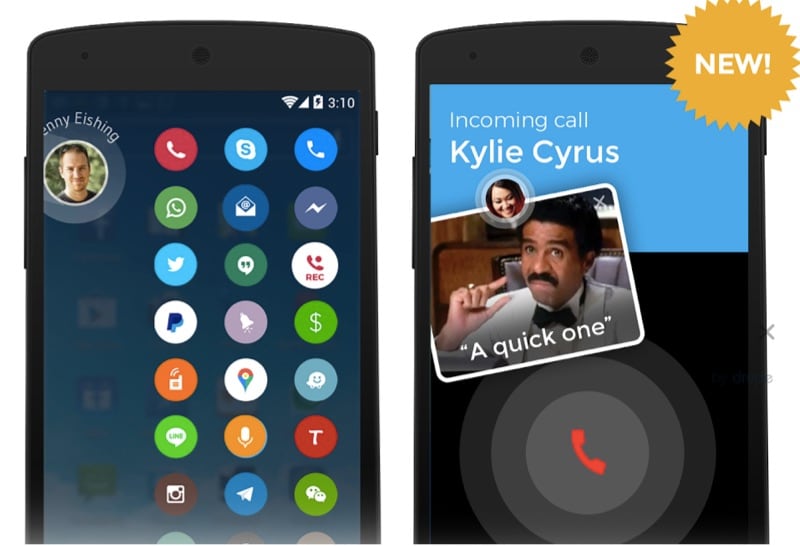 Set as the default dialler, the app is always on, and present on your screen at all times - just swipe and launch, and swipe and call at any time you like. As a whole, the cartoonish look of Drupe is appealing, and the app also lets you customise it with themes which can be purchased from an in-app store.

However, the question of whether or not the GIF calling feature is a worthwhile update is still an open one. GIF calling sounds very outlandish, and honestly, it's questionable how much context a call really needs. Today we have the option of texting someone, sending an IM using WhatsApp, or chatting with someone via Twitter DMs. If you need to set context, why not use one of these?

And if you want to talk to someone to quickly discuss something, share some good news, or just ask someone to go for a drink, does a GIF really add anything to the talk?

Depending on how you answer that question, Drupe's newest update is either the best thing that ever happened to phone calls, or something you really don't want to know more about. We'll leave it to you to decide where you fall on this.

You can get Drupe as a free download on Google Play

product The Drupe app now features GIF calling - when you're making a call, you can add an animated GIF to provide a bit of context to the call. Does the even make sense?

Drupe Lets You Send GIFs While Making Calls. The Best Thing Ever?
Comment