Dokdo Review: This Mobile Game Is the Poor Man's Sea of Thieves 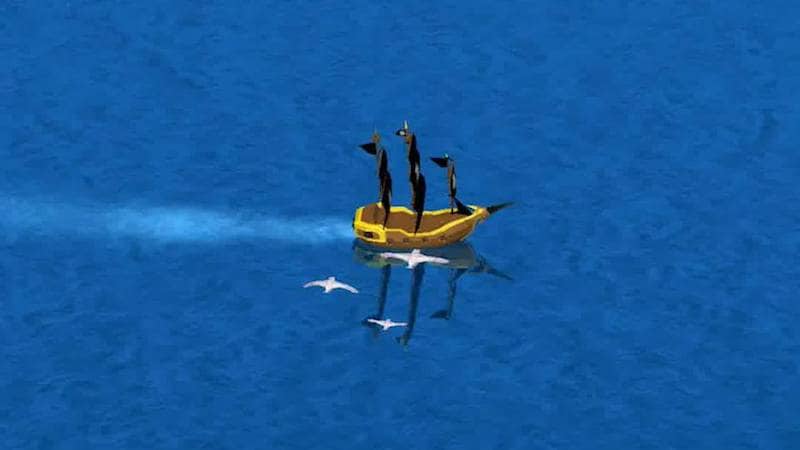 Dokdo is a game that puts you in command of your own pirate ship, free to sail the seas, taking on other pirates in naval battles, discovering islands and making them your own, and upgrading your ship to be able to take on tougher opponents. If that sounds familiar, you're probably thinking of the Xbox One exclusive Sea of Thieves, which released recently. There's just one small difference - while Sea of Thieves is a high-end console game, Dokdo is a mobile game you can download for free.

And while the broad overview might sound similar, the two games are obviously very different. Dokdo is much more barebones than Sea of Thieves. Played in a top-down view, you can see your ship - well, it's really more of a boat when you start - and the ocean around you. At first, there's not much you can do either - you're weak and vulnerable, which means running into any opposition (computer-only, there's no multiplayer) will pretty much be the end for you.

When you plunder other ships, you get the resources you need for upgrades, such as stone, or even silver, gold, and gems. These can be sold in the island markets, or used for upgrades. Early in the game, you’ll want to hold on to the resources you collect, as most upgrades don’t require many coins - Dokdo's currency. You’ll get enough of those in your roving.

At the beginning, if you guide the ship a little way beyond the island you start from, you can fish. This is an important part of the early game. That's because docking at your island brings up a trade menu, and you can use fish to upgrade some parts of your ship, or to barter for goods you need such as wood or stone.

As the game progresses, you’ll set out to smash some pirates, pick up all their valuables, and then convert all of those into coins, to finance your shipbuilding schemes. You can also buy coins with an in-app purchase starting from $2.99 or Rs. 190 in India for 30,000 coins, to $99.99 or Rs. 6,300 in India for a million coins, but that's only if you are finding the going too slow. It's entirely optional, and we enjoyed playing Dokdo without using any IAP.

Fishing won't help you become the best pirate out there so at some point you'll have to move beyond your initial island, and once you're out on the open seas, you're at risk of running into other pirates. Near the centre of the map where you first start that mostly means small boats like your own, but as you venture to islands further afield, you'll run into bigger and more powerful enemies, who can reduce you to kindling with a single broadside.

To grow in strength, you’ll need to take out smaller ships first, and try and secure some more islands. That means mastering the game's controls, and there is a steep learning curve. At first, you'll probably want to get around by double tapping on the screen. This gets you moving in that direction, and you keep moving that way. It's a slow way to turn though, and is best for when you're just trying to get from point A to point B.

Once you've sighted the enemy though, you'll need to manoeuvre, and at first at least, you’ll take a beating in the process. That's because the other way to control your ship is to tap on the screen and drag - but this doesn't turn your ship in that direction instantly. Instead, it's more like turning the wheel of the ship - the bigger the angle, the sharper the turn, though as the ship keeps turning you'll need to keep moving your finger to adjust the direction.

This constant turning means that sometimes your finger can be moving in a direction opposite to that you want to turn, and learning to get the ship to turn the way you want to go is a big part of the game. The other thing you need to learn is how to line up with the other ships, because otherwise for every broadside that you land on them, you're also opening yourself up to a counterattack. Learn to dance around your opponent's defences though, and you can take down a bigger ship without taking a scratch.

It's difficult, and at first the controls feel badly designed, but after spending some time upgrading the ship (and probably dying along the way), you'll get the feel for it, and it starts to really click. After that, there's not much else to do in Dokdo, beyond listening to the sound of the waves, and making your ship more and more fierce, and smashing your way through other pirates.

But there's something very relaxing and almost hypnotic about watching your ship cutting through the waves as seagulls fly by, watching the screen turn dark as the sun sets in game, and then turning desperately because you didn't notice a whale in the dark and it's about to smash you to pieces with its tail.

Although Dokdo is an incredibly limited game, we thoroughly enjoyed it, and the endgame, where you can take your upgraded ship to an arena and battle with wave after wave of powerful enemies, is a fun way to while away time when you're craving some action. The rest of the time it's just about enjoying yourself while peacefully sailing through the oceans knowing that no one can touch your armoured ship.

Of course, you might ask why we enjoyed Dokdo so much, while complaining about Sea of Thieves' lack of things to do. The answer is simple - one is a free mobile game, while the other is a high-end console game, and the expectations are very different. For what it is, Dokdo delivers an amazing amount of fun.

Gadgets 360 played Dokdo on the Xiaomi Mi Max 2. You can download Dokdo for Android and iOS for free.