Dead Among Us Review: Zombie Archery Made in India

Like military shooters, games featuring zombies are a cliche. From survival horror staples like Resident Evil to modern masterpieces like Uncharted, you'll be hard pressed to find a game that doesn't have the undead in one form or another. And at the other end of the spectrum, there's Rolocule. The Pune-based studio has made games like Motion Tennis Cast and Bowling Central. While these two titles cemented its position as one of the better niche developers focusing on motion controlled games on Android and iOS, its latest game Dead Among Us is perhaps its most accessible yet, as you don't need a Chromecast or Apple TV for this one.

Unlike Rolocule's earlier games, Dead Among Us shows a definite attempt at creating some sort of narrative. There's been a virus outbreak and everyone you know is dead or worse, turned into the walking dead. Conveniently, your character is a gold medalist at archery and just happened to have a bow and quiver full of arrows lying around to shepherd survivors to safety, and protect the scientists researching a cure.

In terms of mechanics, Dead Among Us is a gallery shooter similar to games like Deer Hunter 2014 and Contract Killer. You'll find yourself in a location armed with a gun and charged with killing anything you see. In Dead Among Us however, there are no guns. Rather, you have a bow that works with an assortment of arrows. And you're not killing people or animals, you're killing shambling monsters.

Cosmetic differences aside, Dead Among Us stands out due to its control scheme. Other gallery shooters make you use both hands to control aiming and shooting; here you can do it all with one hand. Swipe the screen to look around, hold to aim at a target, and let go to fire. It takes a few rounds to get used to the control scheme, but once you do, it becomes second nature. Considering you're using a bow to rain death upon many a zombie, the combination of swiping, holding and releasing works well. The entire experience of landing a perfect shot is extremely satisfying, and makes us wonder why other games don't explore different control options.

While the control scheme is innovative and enjoyable, there are some issues. We had to tweak the sensitivity to get the best out of the controls on Android (playing on a Google Nexus 6) but it was perfectly fine at default settings on an iPhone 5S, allowing us to hit zombies square between the eyes with consummate ease. A little too much ease perhaps, as that's the overriding feeling we got from most of Dead Among Us' levels.

The levels have you protecting a survivor from incoming hordes of slow moving enemies, or ensuring a colleague doesn't get devoured in broad daylight while collecting supplies. Every time we were greeted with a game over screen it was because of our poor aim, and not because the enemies were too tough, or too many to easily manage. You never quite feel challenged by the enemies and you can breeze past a majority of the levels without too many concerns.

Like most games on iOS and Android, Dead Among Us is free-to-play. Most of the in-app purchases (IAPs) revolve around power-ups that let you which direction your targets are coming from or allow you to kill stronger zombies with a single shot. They're fun to toy around with but not exactly integral to the experience. Other IAPs include new bows or upgrades to your existing one. These include bonuses to power, stability, and the number of arrows you can carry. If these stats aren't what they should be, the game locks you out of specific levels. 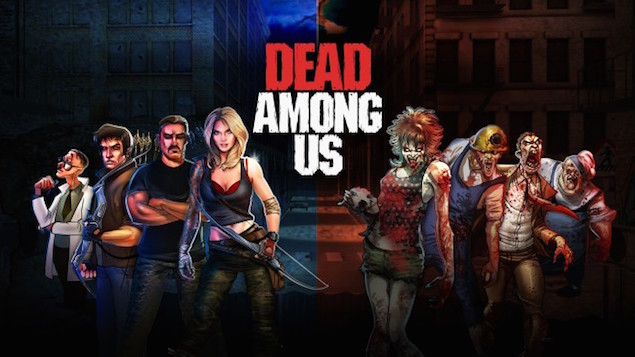 Thankfully, there's more than enough to do without resorting to repeatedly playing previous missions in order to progress. Every time you play a mission you use stamina, and tougher ones using more of it compared to others. Even then though, you're rarely compelled to purchase more of it as the period between refills is surprisingly short. And though the game features ads, they never overstay their welcome. You aren't bombarded to the point that you feel the need to step away.

Aside from being tremendously easy, another niggle is that Dead Among Us doesn't look as good as it could. Although some sections are book-ended with decent comic-book styled segments to fill up the narrative, the actual game looks bland. It's rudimentary compared to the studios other games which were more stylised and art heavy. Dead Among Us' attempt at realism falls flat from a visual standpoint. This feels particularly tragic considering certain elements like bow trajectory, stability, and impact seem to be carefully considered, making the sheer experience of landing the perfect shot gratifying.

All in all, Dead Among Us is a fine game to fill up your time during a commute or while in queues. It's a solid gallery shooter sporting great controls and a more than generous difficulty curve that will ensure you keep playing. Just as long as you can get past the so-so visuals.

We played Dead Among Us on Android and iOS. It's available for free with in-app purchases on both platforms.

product The undead and arrows make for an fun diversion in Rolocule Games' Dead Among Us.

Dead Among Us Review: Zombie Archery Made in India
Comment