'Death is not permanent,' is the rule most role-playing games seem to follow. The moment you die or make a bad decision, you can load up a recent save file and undo it all. Darkest Dungeon is not that kind of a game. In Darkest Dungeon, each character that dies is gone for good and you must live with every bad decision you make.

That makes the game unforgiving and infinitely more stressful, but it also gives the game a unique identity. Darkest Dungeon - a roguelike game - accomplishes this by making deaths a part of the game, and ensuring that the risk is worth the reward.

Darkest Dungeon is the story of a man who owned a large estate and unleashed several monsters upon the world. He did this by digging up dungeons under his estate that opened up portals to the monsters' realm. At the beginning of the game, the narrator - whose voice acting is sublime - introduces the player to this story and reveals that the owner of the estate has committed suicide.

Your character has inherited the estate and your goal is to cleanse it of all lurking evil monsters. To do this, you need to recruit adventurers and send parties of four into various dungeons. When you do that, you will discover the most crucial gameplay mechanic - the affliction system. 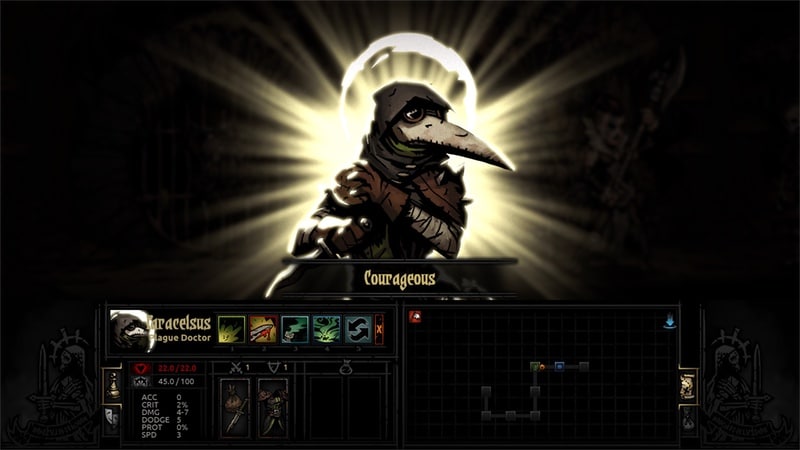 In Darkest Dungeon, every character has a stress level, graded on a scale of 200. For every 100 points, the hero develops an affliction that affects his or her abilities in battle. Stress levels can jump really fast when you're in a dungeon. If characters get wounded, attacked by certain types of monsters, trigger a trap, or simply run out of food or torches, stress levels tend to rise. Once stress crosses a certain threshold, the character's resolve will be tested. Then the character will either develop a virtue or, more often, an affliction.

At times they will refuse to be healed or pass a turn in combat - which could be the difference between victory and defeat. Their stress level could also rise rather quickly, leading to a heart attack that reduces their health to a negligible amount. One more hit and that hero will be dead. That made us conclude that it is better to lose a character quickly, rather than heal them constantly while they're suffering from an affliction.

This only begins to describe the subtle layers of combat that are there in Darkest Dungeon. You move your characters when they’re not in combat by tapping to the right or left of the screen, depending on which direction you want to go. You tap on traps to disarm them, on doors to open them, and on chests to unlock them. Combat is turn-based but otherwise the game is realtime. You can take a party of four into various dungeons and complete objectives such as defeating a certain boss, exploring 90 percent of rooms, completing all battles, purifying certain portals, and so on. Combat is turn-based and a lot depends on the character classes you have. Certain characters are "tanks" that can take a lot of damage and are best positioned at the head of the party. Then there are healers who you need at the back to ensure that your party members can avoid illnesses and death. Middle of the road characters such as highwaymen and grave robbers are also particularly useful. 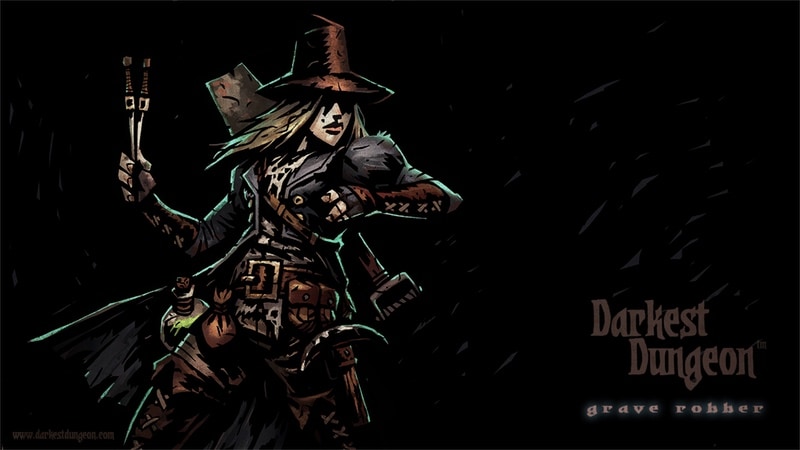 You need to choose your character classes based on the mission. Certain characters will have a higher scouting skill, and this will help you when the mission is just to explore different rooms. Scouting helps you locate different traps, loot, and prevents your characters from being surprised by lurking monsters. If you do get surprised, your party order changes, leading to all sorts of complications such as your healer being at the front of the party and dying early.

Another factor in play here is the torch. These dungeons don't have any electricity or lighting system so you rely almost entirely on torches - the good old burning wood kind. As you go deeper into dungeons your torches will dim and dungeons will become darker. That will lead to an increased difficulty level. Monsters will fight twice as hard, and you're more likely to be hurt by traps too. But the reward here is better loot so you have to decide how ready you are.

Before every venture into the dungeons, you'll get an opportunity to provision. It is here that you need to stock up on food, torches, healing salves, and shovels. These items will be extremely useful during your adventures so be sure to stock up heavily. It is always better to be over prepared than to run out of food at a crucial point in the game.

In between missions you'll be hanging out around the estate where several establishments will help you heal or upgrade your heroes. All of these cost quite a bit in terms of gold and we generally noticed that it's not worth the cost to heal low-level heroes. Once your heroes are upgraded and preparing to take on the Darkest Dungeon, which is the name of the boss level, you're better off ensuring that their stress levels and afflictions are in check. 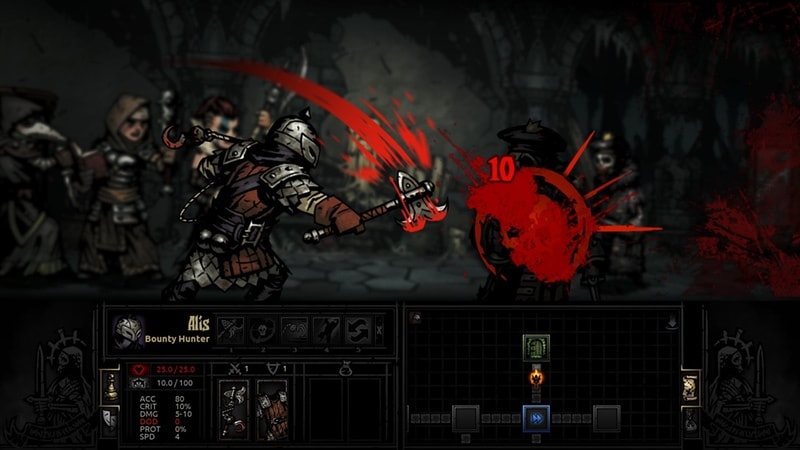 You also get to upgrade various establishments here, so that weapon upgrades are cheaper, you can hire more heroes, and so on. These upgrades are financed by your deeds, which means that you need to collect loot from dungeons to fund these.

The entire system in Darkest Dungeon is rather complex but it has been thought out very well. It will definitely feel punishing and unforgiving to those who are used to conventional RPGs, but if you take the time to relearn some of those skills, you will be rewarded heavily in this game.

We'd also like to note that this game is definitely not for the faint hearted. The overall tone of the game is quite grim and the story only adds to that. If you are looking for a game that gives you some hope and reduces your stress levels, perhaps this isn't the best one for you. We often found ourselves worrying too much about the fate of the characters and whether they'd die in the next battle. Until you gain some skill in this game, it's best not to get too attached to any of your heroes.

The Darkest Dungeon experience on iPad is remarkably polished too. The voice acting, once again, impressed us a lot and we were pleased with the game's art as well on the iPad. If you're coming to the iOS version after playing Darkest Dungeon on a PC, you won't be missing much. 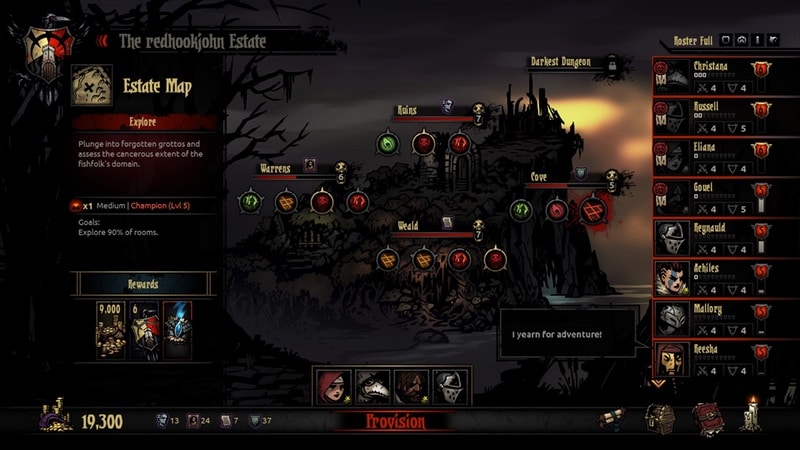 However, we did feel that some on-screen elements were optimised for the mouse pointer. Scrolling through your roster of heroes, for example, requires you to hit a rather tiny arrow button that's easy to miss. Similarly, you need to long-press certain items or heroes to read more about them. This could have been improved with a swipe mechanism to let you scroll between items and heroes, but it is missing unfortunately. We also felt that the font size was too small for a lot of things and that can be very uncomfortable. The game is optimised for a 16:9 display, and that leaves black bars at the top and bottom of the iPad’s screen. This may not bother most people, but we did find ourselves wishing for an iPad version that was perfectly optimised for the device.

For Rs. 400, the amount of gameplay Darkest Dungeon offers on the iPad is simply stunning. It could easily charge twice the price and could still feel like it's totally worth the price. If you have an iPad and want to play a challenging role-playing game, Darkest Dungeon is exactly what you need.

Affiliate links may be automatically generated - see our ethics statement for details.
product We played Darkest Dungeon on the iPad and came away impressed.
Comments

Further reading: Darkest Dungeon, iPad, iOS, App Store, Red Hook Studios
Pranay Parab Email Pranay Pranay is in charge of podcasts and videos at Gadgets 360. Over the years, he has helped build the tutorials section of this site from the ground up, got the Guide section off the ground, started two podcasts, written several in-depth features, reviewed fitness gadgets, handled social media and most recently, taken charge of videos as well. He loves travelling, particularly to places not frequented by tourists. He keeps running half-marathons across the country and hopes to complete a full ...More
Android 8.0 Oreo Using Mobile Data Despite Wi-Fi Turned On, Some Users Complain