After Ashes Cricket, Big Bash Cricket— the second part of Cricket Australia’s two-pronged approach to video games — is here on both Android and iOS. It's part of Cricket Australia’s long-term plan to use video games as a way of keeping teens involved with the sport. The Australian cricket board has partnered with Big Ant Studios, the makers of Don Bradman Cricket 17, to launch two titles — Ashes Cricket for PS4 and Xbox One, and Big Bash Cricket for mobile.

If Ashes Cricket targets hardcore cricket fans who want an authentic cricket experience, then Big Bash Cricket is at the opposite end of the spectrum. It’s targeted at casual gamers, some of whom may not even know what cricket is. If you play Big Bash Cricket, you’ll realise this immediately. You can play this game on Android or iOS, and it’s easy to play with one hand, unless you have a gigantic phone.

Big Bash League is Australia’s premier domestic T20 cricket tournament. It features eight teams, each named after a major Australian city - though Sydney and Melbourne have two teams each in this championship. Since this is a game backed by none other than Cricket Australia, the board responsible for professional cricket in the country, all teams and players are authentic. Even if you don’t follow Big Bash League, there’s a good chance that a cricketer you like is in this game. Just like last year, Big Bash Cricket has both the men’s and women’s Big Bash League in the game with the full roster of players available to all teams.

There are three main modes in this game — Quick Match, Tournament, and Challenge. Quick Match lets you start a match immediately between any two teams you like. Tournament mode features the full Big Bash League schedule, so you can play around 15 matches and try to win the tournament. You can choose between 2, 5, 10, 15, or 20 overs per innings, which lets you decide how long each match lasts.Challenge mode is a new addition this year and it has two types of tests to throw at you. One is simple bowl - 25 balls or take 10 wickets on any given day. The second is a scenario mode called Moments, where you’re given specific goals. This mode describes Big Bash League games from previous years and asks you to either relive, or rewrite history. It's similar to what the Brian Lara (and Shane Warne) series of games did on the Sega Mega Drive and original PlayStation, years ago. So you might be asked to help Sydney Thunder win a game the team had lost or you may even be asked to win it without losing any wickets while one player gets a half century. 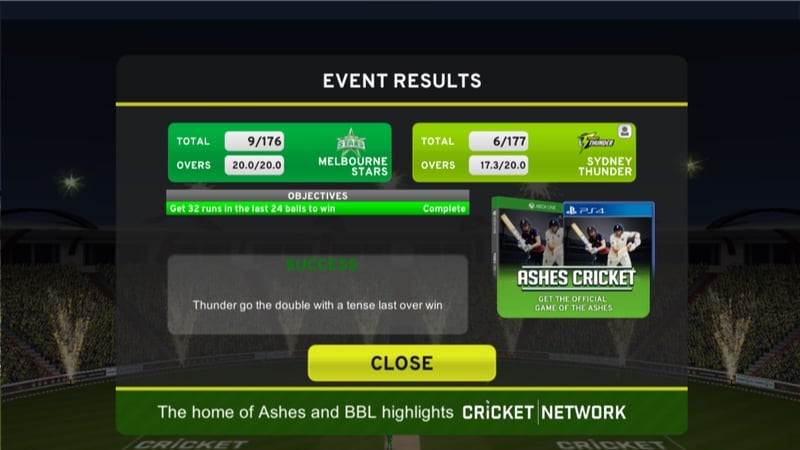 We really enjoyed playing Challenge mode in Big Bash Cricket. Even though there’s no real in-game reward for completing these challenges, it gave us a reason to return to the game every day as Moments mode refreshes daily. Having authentic player licenses really helps in this mode, as you get to help your favourite players succeed. We also love the fact that the game includes challenges for both men’s and women’s tournaments. The only thing we didn't like is that you need to create an account to access the Challenge mode.

Back to the game itself — Big Bash Cricket retains the same core gameplay elements as its predecessor. While batting, you swipe in the direction you want to hit the ball and make sure you time it right. If you get the timing or direction wrong, there’s a good chance of losing a wicket. While bowling, you need to drag the marker on the pitch to select where to land the delivery and swipe to decide the pace and direction of the ball. Fielding and running between the wickets are automatic.

The new things, however, are mechanics called Super Bat and Super Ball. If you hit three sixes in a row, or bowl three balls without conceding a boundary, you unlock Super Bat or Super Ball. Super Bat lets you hit the ball further than normal, so even poorly timed shots can go for a six. Super Ball adds a bit more pace to your deliveries and you can use that to try and land a wicket. When you trigger Super Bat or Super Ball, you’ll see a meter with three bars, which reduce if you fail to hit a six or if you concede a boundary. This is a fun mechanic that motivated us to learn how to master the game. 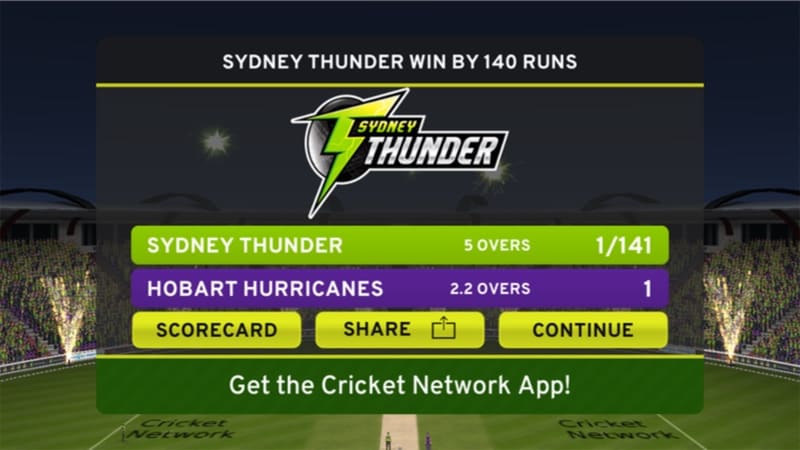 There are three difficulty levels in this game — Normal, Pro, and Legend. Once you get the hang of the game, Normal mode will just seem way too easy. We managed to score almost 700 runs without losing a wicket in 20 overs in that difficulty level. Pro is slightly more challenging, but we highly recommend playing Big Bash Cricket in Legend mode for maximum enjoyment.

This is because in Legend difficulty the AI is really smart. It will vary the pace of its deliveries quite a lot, leading to a lot of wickets. Its slower delivery is very hard to spot and we took a long time to learn how to win on Legend mode. Even after we became quite good at that, we’d still lose the occasional game, which kept us engaged for longer. Even when you are bowling, the AI at Legend difficulty isn’t easy to beat. There are a few wicket-taking deliveries such as a slow inswinging yorker from around the wicket, but there’s no guarantee that these will land a wicket every single time.

We’ve been playing Big Bash Cricket for around 10 days and it’s safe to say that the game had us hooked the whole time. This a free-to-play game with none of the annoyances of free mobile games. It has ads but they show up in between two innings only. There’s no in-game currency, no unnecessary waiting to play games, and no horrible video ads that let you play a delivery again if you get out. The game has some fun customisation options that let you change the ball, helmet, and so on. Even these can be unlocked via the daily login bonus or by winning certain in-game trophies — no payment required. We must praise the makers of the game for resisting these monetisation tactics. Instead, they display logos of sponsors when you trigger Super Bat or Super Ball, or when the batsman reaches a milestone such as 50, 100, or 150 runs. This is perhaps the least intrusive way to monetise the game. 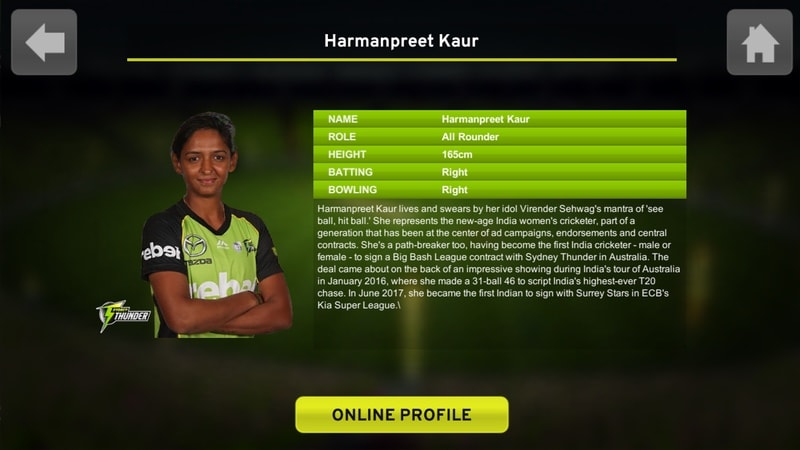 Having said that, there still are some things that Big Bash Cricket can do a lot better. Player likenesses could be improved a lot — at the moment most players look generic and skin tone is the only differentiating factor between most of them. There are also some minor graphical glitches such as the ball flying through the roof of the stadium sometimes when you hit a six. We also noticed a bug during Super Overs — the T20 cricket equivalent of a penalty shootout. The AI would bowl the same delivery six times during a Super Over and hopefully the developers will fix this soon.

If you’re a stickler for realism, you’ll be disappointed to note the completely unrealistic shots that land you six runs. We have no idea how a paddle scoop shot off an incredibly slow delivery can go for a six outside the stadium. In Big Bash Cricket, that’s quite normal.

If you want an all-action, over-the-top cricket game for smartphones, Big Bash Cricket is the best of them right now. Others game are better for a more realistic cricket experience on mobile, but Big Bash Cricket has kept things simple without overly aggressive monetisation and that makes it a great experience.

Big Bash Cricket is available for free (with ads) on the App Store and Google Play.

product With the new season of Big Bash League T20 cricket tournament coming up, the official game for the tournament is out. Here’s our review.
Comments

Further reading: Big Ant Studios, Big Bash League, Big Bash Cricket, Cricket Australia
Pranay Parab Email Pranay Pranay is in charge of podcasts and videos at Gadgets 360. Over the years, he has helped build the tutorials section of this site from the ground up, got the Guide section off the ground, started two podcasts, written several in-depth features, reviewed fitness gadgets, handled social media and most recently, taken charge of videos as well. He loves travelling, particularly to places not frequented by tourists. He keeps running half-marathons across the country and hopes to complete a full ...More
Samsung Galaxy S9, Galaxy S9+ 'Unlikely' to Be Unveiled at CES 2018: Report
Redmi 5 Plus vs Honor 7X vs Xiaomi Mi A1: Price in India, Specifications Compared