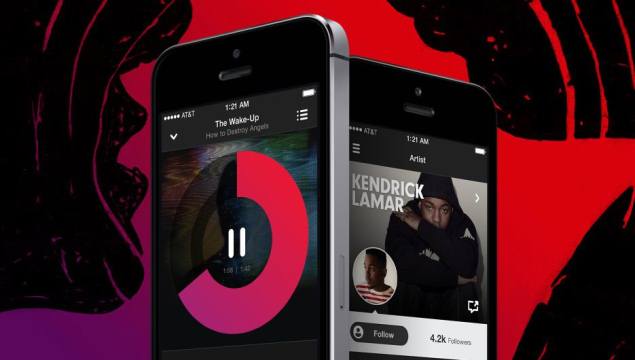 There's no shortage of music subscription services that offer unlimited streaming for a monthly fee. The conceit of the latest offering, Beats Music, is that its playlists and other recommendations are curated by warm-blooded humans, not robots.

For $10 a month, you get unlimited streaming and song downloading for offline listening. Downloaded songs expire once you cancel the subscription. AT&T customers are also eligible for a $15-a-month family plan for as many as five family members. You can sign up for a 90-day free trial, but there's no free, ad-supported version like some of its rivals.

Beats Music has its roots in the MOG streaming service, which Beats Electronics bought in 2012. Beats Music has a more playful interface than MOG, which was mostly utilitarian. Beats also introduces a few ways to discover both new and old material.

Apps Android, iOS, and Windows Phone are available now. Computer users can listen through their Web browser. And like other streaming services, you can choose specific songs, albums or artists on your own. Beats Music has a catalog of more than 20 million songs, which is comparable to its rivals.

I began by going through a get-to-know-you sequence for new users, picking a few genres and artists I like. Somewhat flustered by the scarcity of choices, I picked "Sting," "Katy Perry" and "Harry Connick Jr." and the genre "Pop." I'm glad I was discerning about these choices (redoing them several times), because eventually I was presented with something I liked. 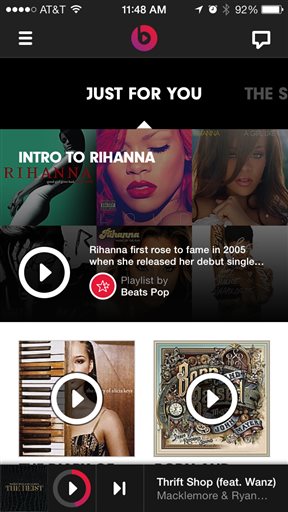 The Beats Music app tries to take the information you enter in order to present you with a variety of albums and playlists that are "Just For You."

Another section for recommendations, dubbed "The Sentence," prompts you to fill in blanks to establish what you'd like to hear, but you end up with silly sentences like "I'm in the shower & feel like ordering in with my family to Indie." It's reminiscent of Allrecipes' "Dinner Spinner" except I'm not sure what ingredients I'm adding in. I mostly skipped this game because I found the resulting choices to be far too random.

Another "Highlights" section made more sense, like a playlist of the "2014 Grammy Winners."

One recommendation I liked from the "Just For You" section was a playlist called "Young Lovers Heartbreak Mix." If you have a rainy day - or in drought-plagued Los Angeles, at least a few hours with nothing better to do - it's worth a listen.

The 25-song, 96-minute playlist starts off slowly with the piano ballad "Say Something" by A Great Big World. It builds gradually, ramping up with the rise-from-the-ashes fourth song "Skyscraper" by Demi Lovato. It hits a crescendo between songs 13 and 14, when "Don't Speak," Gwen Stefani's 1996 hit with her band, No Doubt, crashes into Miley Cyrus' "Wrecking Ball" from last year. Somewhat appropriately, the playlist ends with Taylor Swift's power recovery song "We Are Never Ever Getting Back Together."

The app says the playlist was created by "Beats Pop," but the curator was actually Arjan Timmermans, the popular blogger behind ArjanWrites.com. Hired as the head of pop and dance programming at Beats Music last year, Timmermans is one of nine real people who put some 5,000 playlists together for Beats Music. (Neither Dre nor Iovine are among them).

The playlist was designed for "a teenager who got their heart broken for the first time," Timmermans said in an interview. The songs - a mix of hits by current teen idols and breakup classics like "Don't Speak" - are meant to work together emotionally, he said, telling the listener, "It's OK to be sad, but I can move through this."

The playlist has a beginning, middle and an end and runs about as long as a movie. And I found that some songs' lyrics work together back-to-back, like the way Stefani's line "don't tell me cause it hurts" runs into Cyrus' "don't you ever say I just walked away, I will always want you."

That's a link I don't see a machine making these days. For people, it's probably a subconscious connection buried deep down there somewhere.

I am no teenager anymore, am happily married and am not the playlist's presumptive audience. But as a sampling of what Beats Music has to offer, it shows me this app has a soul.
Comments