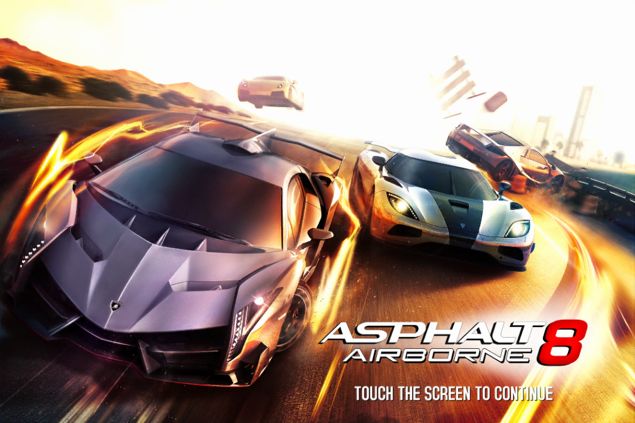 Asphalt 8: Airborne is the successor to Gameloft's incredibly popular racing game, Asphalt 7: Heat. It carries on the tradition of providing an exciting racing experience on your mobile device with an added twist.

The title of the game is a pointer to the biggest change compared to its predecessor. Asphalt 8: Airborne rewards for tricks you perform while you are in the air, like doing Barrel Rolls or Flat Spin jumps. You can do Barrel Rolls by driving onto one of the many angled ramps present on the track, letting a mix of gravity and momentum do the rest. In most cases you can trust that you'll land safely, unless you really messed up the approach. Flat Spin jumps are a bit tricker to perfect, as they require you go off a ramp while drifting (braking the car at high speed while steering it), and the success or failure depends on the angle of your approach.

You can play Asphalt 8: Airborne in various modes including World Series (Multiplayer over the Internet), a local Wi-Fi race, a quick Solo race, or the Career mode. The main screen of the game can be a little intimidating, and it takes a while to figure out the various options.

In Career mode, you start with a car and a pretty minimal budget, and try to earn more money by winning races and performing tricks. As you go along, you also have the opportunity to pick up stars that unlock the next racing events within the season. You can pick up to five stars at each event, with 3 based on where you finish (1 star for finishing third, 3 stars for winning the race) and two additional stars for achieving event-specific objectives like doing the specified number of Barrel Rolls, Knockdowns, Perfect Nitro Triggers etc.

Asphalt 8: Airborne features excellent graphics though you may need the latest devices to enjoy them to the maximum. The game stuttered at times on our iPhone 4S, though our third-generation iPad handled everything without any hiccups. However, we liked the fact that we could seamlessly switch from one device to the other and the game was able to sync our progress via the cloud using the Game Center ID for authentication.

Coming to the actual gameplay, the default controls for Asphalt 8: Airborne feature tilt to steer, auto-acceleration, with taps on the left and right edge of the screen to brake (drift) and nitro-boost respectively. You can of course change the controls to get tap-to-steer and manual acceleration, if that's what you prefer. The in-game music is pretty good, with an option to choose between Bass, Rock, and Electronic music.

It's quite easy to start playing Asphalt 8: Airborne, but surprisingly difficult to actually win a race, especially with the crummy car you start with. You can upgrade your car by making an in-app purchase, or by working your way up by winning races - did we mention how difficult that is? You can drive a near perfect race, and still find yourself unable to overtake the five AI-controlled cars. Maybe that's just us, and the petrolheads out there would do a better job.

Each event in a season is associated with a city. So you can be driving across the desert in Nevada in one event, and find yourself speeding through the streets of Tokyo in another. You'll go through tunnels, avoid oncoming traffic, and even discover a shortcut or two along the way. We personally liked the ability to take a different route compared to the other racers, though it does come with mixed results - sometimes you gain an edge, and at other times you end up going around in circles without getting anywhere.

Asphalt 8: Airborne is just $0.99 for iOS (universal app for iPhone and iPad) as well as Android. At the price, the game is a must download, especially if you have the latest hardware and don't mind slowly working your way to the top.

In smart watches, a name that's been there before
Nintendo announces 2DS handheld gaming device, slashes Wii U price