Developer Grailr has made a number of apps in its Carrot series, which include to-dos, alarms, and calorie counting, with attitude. That's because the app features an "AI" called Carrot, who will sass you when you use the app, and if you don't do what you're supposed to, Carrot can get pretty upset too. Grailr has now released its first game based on Carrot, where you play… a developer who is working to build an artificial intelligence called Carrot?.

The difference is that in the game, you start off with Carrot destroying the world, and then end up exploring various parallel Earths so that you can try out new, and worse, decisions again and again. The actual gameplay is a lot like Reigns - you'll have to swipe left or right to make decisions, with four different factions to please. If any one group goes too high or too low, the game ends, and there are a lot of different fates you can unlock.

Apart from your programmers and investors, you're dealing with the government and the press, and there are a lot of sections of dialogue that feel like barbed commentary about each of these groups. As you play though, you'll stumble across some sub-plots to explore, and there is a lot of fun to be had. There are times when you'll find yourself making genuinely bad decisions (from a gameplay perspective) just to troll the tech media, or perhaps to deny your employees some outrageous perk.

It's fitting that the game has come out now, when we're in the middle of a new season of HBO's Silicon Valley, because Artificial Superintelligence taps in to some of the same ideas for the madness it wants to highlight. 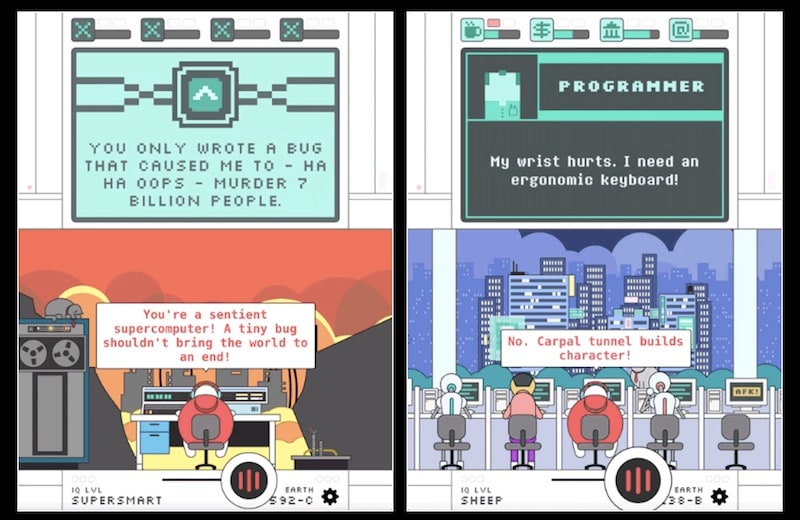 However, Artificial Superintelligence is interesting in that it's not just fooling around all the time. The 'AI Pioneer' character can actually tell you a lot of interesting things, so you can actually learn something (even if pretty basic) by playing the game. And while some of the requests you get for product features are clearly tongue-in-cheek, they're not that far from how we're really using this kind of technology today.

Artificial Superintelligence also does a good job of making Carrot feel like a real character - of course, that's something the developer already has practice at doing, with its various apps, but the interludes in the game where you do things such as test Carrot's image recognition capability, for instance, end up feeling like a natural part of the game rather than an annoying interruption.

Besides, in one of the parallel worlds, dinosaurs weren't extinct and we got to be a T-Rex wearing headphones. How is that not a win?

For all that, there are some real issues here as well. Like Reigns, the purpose of the game isn't too clear here either. You have a small to-do list of achievements to cross off, and you've got the task of slowly building up the intelligence of Carrot, but apart from that, there's no real goal to work towards. Furthermore, loading each session takes too long. We tested the game on an iPad Pro, and chafed at how long it took between losing one session and starting the next. This is not helped by the unnecessary button presses. You have to swipe once when the session ends, then swipe a second time to dismiss the score, then wait for it to generate the next session, before finally tapping again to start. Any time a session ends, you think about hitting the home button and coming back later.

Another issue is that the interface is not as obvious as it could be. Artificial Superintelligence uses simple drawings with flat colours and thick black outlines that look like Flash animations, and the presentation looks great frankly. But when you start playing, you realise that most of your attention gets focussed at the bottom of the screen, where the switch to make your choices lies, and you don't even realise until you've played a few times that you can swipe in the middle of the screen, you don't need to touch the actual toggle.

Like Reigns, Artificial Superintelligence also runs the risk of becoming a little repetitive. Its writing is engaging, and for the most part avoids that problem, but there can be a few times when you feel like you're being railroaded into a bad ending, or that a session has too many scenarios where your choices are literally: "Um" and "Uh".

Despite these issues, we found Artificial Superintelligence to be quite enjoyable, and ended up spending hours each day swiping between meetings, on the commute, and in bed before sleeping. We still haven't unlocked all the content of the game, but enough to know that if you're looking for something with a wicked sense of humour, and aren't concerned about complex gameplay, then this game won't let you down.

Further reading: Reigns, Tinder, Mobile games, Artificial Superintelligence, AI, Artificial Intelligence, carrot, MeetCarrot, Grailr
Gopal Sathe Email Gopal Gopal Sathe is the Editor of Gadgets 360. He has covered technology for 15 years. He has written about data use and privacy, and its use in politics. He has also written extensively about the latest devices, video games, and startups in India. Write to gopal@ndtv.com or get in touch on Twitter through his handle @gopalsathe with tips. More
Flipkart Big 10 Sale: Lenovo K6 Power, iPhone 7 Plus, and Other Top Deals
Injustice 2 for PS4 and Xbox One Out Now: What You Need to Know

product Artificial Superintelligence is a lot of fun, even though it lacks the fluidity that made Reigns so addictive. Plus, you might actually learn something from this game. 4 out of 5 stars