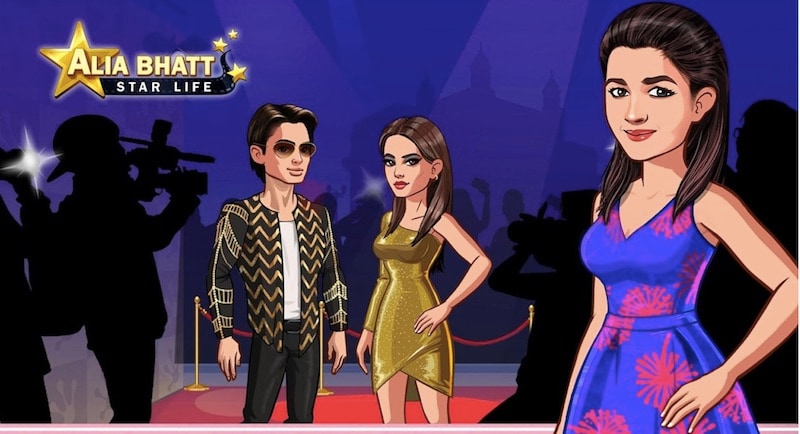 Another day, another licensed title by an Indian mobile games developer. Most of these games have a movie attached to them, but this one stands on the shoulders of Bollywood actor Alia Bhatt.

It’s not the most original concept, looking a lot like Glu Mobile’s extremely profitable Kim Kardashian: Hollywood game for Android, iOS, macOS, and Facebook. The game is made by developer Moonfrog, a Bengaluru-based studio run by ex-Zynga staffers known for having Command and Conquer and FarmVille creator Mark Skaggs on its board.

Alia Bhatt: Star Life puts you in the role of a Bollywood wannabe. You starting by choosing between playing as a male or female character, and even play it in Hindi if you prefer. If you were expecting this is a game along the lines of ones associated with Sultan or Prem Ratan Dhan Payo — think again.

The events of Alia Bhatt: Star Life are, as far as video games go, grounded in reality. Or as real as it can be considering you’re a photographer at the start of the game, who is almost immediately discovered by Alia Bhatt who takes an instantaneous liking to you (even you exclaim ‘Aaila Alia!’ on meeting her for the first time), setting you on the path to becoming the next big thing in Bollywood.

Before you know it you’ll be throwing shade at social media influencers, chatting up lower-rung celebs, and taking on gigs like blink-and-miss film cameos and club hosting to raise your profile, which allows you to increase your fame by gaining more fans.

Although all these activities might seem hectic, the game simply lets you tap at the environment to complete them. As far as we can tell — as the game doesn’t make it clear how to complete each of its sections — the objective of each task is to tap marked areas of the scenery often enough for stars to pop up. You then tap the stars so they’re added to a meter on the bottom left of your screen. Every tap consumes energy which can be replenished by converting gems — an in-game currency, while another lets you travel from one location to another.

If all of this sounds familiar, that's because it is. Nearly every aspect of Kim Kardashian: Hollywood has been faithfully reproduced in this game, right down to certain aspects of the user interface, such as drop down missions menu on the left of your screen, and a level bar that indicates your progress on the top left.

One surprising, but welcome facet lifted from the Kardashian template is how the game handles dates. You can, if you so choose, play the game as a male character and date a man, or play as a female and well, date a woman. It’s surprisingly liberal touch, more so when we consider how a much bigger publisher, EA chose not to release Dragon Age: Inquisition in India, because it had similar elements.

Oddly enough, the option for two women to kiss on a date is missing, but two men can. Not that the game shows the act though. In fact, most of the actions you undertake in-game have no visual feedback. Be it kissing, or delivering lines in front of a camera, you’re simply prompted to do so and gain a small amount of stars and currency to keep you going forward. The lack of effects is a downer. Even tapping a light to switch it on during a photoshoot doesn’t turn the bulb on, which you could do in Kim Kardashian: Hollywood.

Game Development in India: In a State of Constant Flux

That doesn’t mean there’s nothing of merit here. The art direction is surprisingly solid and the animations, while marionette-like, give the game some sense of charm. But the icing on the cake is its dialogues. It's so bad that it's good, and it’s good enough to keep you going forward despite your better judgment. Driven by a perverse curiosity to see how bad it could get, we kept playing to see how deep the rabbit hole would go.

From malicious publicists to catty, entitled influencers, and club owners obsessed with saying ‘the best of the best of the best’ several times in conversations, the characters exude everything one comes to expect from Bollywood and its ilk — bombastic, over the top caricatures with gargantuan egos and a sense of phrasing that’s best described as cringe-worthy. The only character who is voiced is Alia Bhatt herself, and that isn’t particularly well done. Rather, it’s borderline grating. You’re not missing much playing this game with the volume turned down to zero.

In a game like this, you’d assume microtransactions to be the cliched villain looking to thwart your enjoyment at every juncture (as is the case with Kim Kardashian: Hollywood), but that’s far from the case here. There’s a generous amount of currency to get you started, and you get more as it continues. It will be interesting though, to see if that changes as Moonfrog gauges what should be the ideal in-game economy on hitting critical mass. For now it’s ad-free on Android. Yes, a shocker for a game on Google’s storefront, we won’t be surprised to see ads in the near future. Considering how notoriously resistant Indian gamers are when it comes to making in-app purchases, an obvious monetisation option may just be needed to keep the lights on.

Chances are if you’ve played Kim Kardashian: Hollywood you know what to expect. Whether it has staying power or not though, depends purely on your affinity towards Bollywood, rather than its title celeb. Its gratuitous borrowing from a successful template makes for a cookie-cutter experience, offset by strong art and oddball characters. Alia Bhatt: Star Life is worth a download for curiosity's sake, if nothing else.

We played Alia Bhatt: Star Life on the Xiaomi Redmi Note 4, it's available on the App Store and Google Play for free with in-game microtransactions ranging from Rs. 10 to Rs. 3,100.