IGTV: Can Instagram's New App Help It Stream Past YouTube?

What would you do if YouTube disappeared today? Hypothetically, say YouTube fell off right now, where would you be?

The fact that this question troubles viewers and creators alike is enough to highlight that there is no real alternative to YouTube on the Internet at tthe moment. But now, Instagram is coming after YouTube and it is coming hard. Ever since Facebook acquired the photo-sharing app back in 2012, it has grown manifold. The social-media giant has also been aiming for YouTube since the time it introduced videos on its platform. It has been doing a decent job as an alternate video platform, but its efforts seem to have not been taken well by serious players who still tilt in favour of the Google-owned platform.

However, Facebook clearly has no plans to stop, and this time it is firing its guns from Instagram's shoulder. With a newly introduced app called IGTV, Instagram has created a platform for long-form videos wishing to reap the benefits to its own creators, while also convincing some big-name YouTube creators to come on board.

Undeniably, the biggest strength of IGTV is that it is starting with over a billion users already, as anyone with an Instagram account can begin uploading and watching videos right now.

YouTube has been the go-to video platform pretty much since the Internet went mainstream. Whether you want to know how to boil an egg, watch top 10 goals by Messi, or what happens inside a proton collision, YouTube is possibly the most likely place where you would go. You have to give it credit for launching an entire generation of creators and some of the best content that has been produced in recent times. Additionally, due to its horizontal format, YouTube is a premier online destination for digital-first creators and for music and TV content. Additionally, it can also provide a personal viewing experience as well as a social one.

But we cannot deny the backlash YouTube has received. Several creators have publicly expressed their disappointment in terms of YouTube's revenue sharing models. Due to its strict monetisation algorithms, several creators have claimed that they cannot just bank on their earnings via YouTube. As a result, you might have seen many users partner with brands to produce "branded content" to bolster their earnings.

For creative reasons, popular content creators usually do not put all their eggs in one basket. Most of them believe in diversification and owning an audience on multiple platforms as a smart thing to do. In the real world, YouTube is too massive to fall off suddenly - most people will definitely see a failing trajectory, if it happens. But whether it will be Instagram that could make a dent in YouTube's domination remains to be seen.

Even if Instagram is onto something massive with long-form vertical video, the IGTV app as it is now, will likely face many of the same challenges that YouTube has in the past. Undeniably, the biggest strength of IGTV is that it is starting with over a billion users already, as anyone with an Instagram account can begin uploading and watching videos right now. Also, Instagram is the only big platform to take on YouTube since it has a natural advantage on mobile devices. From both a consumption and a content-creation viewpoint, IGTV is going directly up against YouTube.

Can it succeed? Read on.

Vertical vs horizontal videos
The vertical video format that Instagram is focussing on as a selling point was initially popularised by Snapchat, and IGTV now wants to take that to the next level. Until now, vertical videos have worked well in a shorter format. A quick message from a celebrity, sure. A short recipe from a chef, why not? A poet reciting a few lines, it could work. But a major reason people leave Instagram for is stuff like movie trailers, music videos, or highlights from sports matches, where YouTube continues to dominate.

The problem does not lie in providing the long form video format, it is in getting the same type of creators that viewers are leaving the app to watch on YouTube. Facebook did try to push videos on its platform last year, but the quality of content hosted on it has not been up to the mark. Instagram will have to offer creators a big share of its revenue if it wants them to jump ship to a format that doubles their workload - after all, crafting and editing a long-form video is more labour-intensive than capturing an image, especially doing so in the vertical format that's unique to the platform.

IGTV monetisation will inevitably be an upcoming feature that could also include ad revenue share. But is it enough to petrify YouTube? Not quite, not right now.

YouTube has the upper hand because of its capabilities as a search engine. Essentially, YouTube can be termed as the 'Google for videos' and from the time that I have spent with the new Instagram app, search does not seems to be the key focus for the platform. 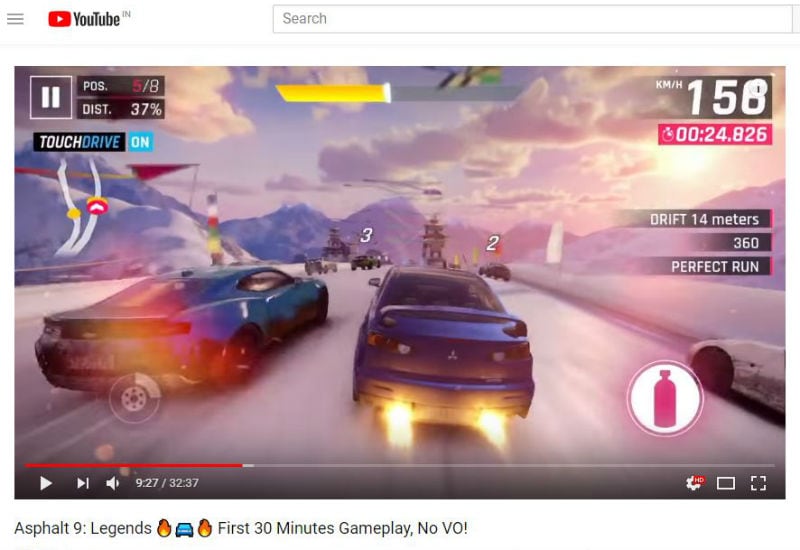 What works for Instagram though, is that everyone spends time on the app. Almost all my friends are always available on Instagram. When I go to YouTube, I am usually looking for something. But on Instagram, I am waiting in line and it's like, "give me more." That could work well for IGTV too, once I am addicted to it.

App design and experience
From the moment I opened the IGTV app on my smartphone, the videos immediately started playing. It starts with a static display, similar to old television sets. No wonder, Instagram compares the app with a TV, but it seems to be just a fancier way to portray an 'autoplay content' feature.

You will instantly be presented with videos from people you follow on Instagram. You will have to swipe to the side to keep viewing more videos. The key differentiating factor from the main Instagram feed is that there are no still photos or stories. It also gets rid of the shorter videos posted on Instagram and you'll only see videos that are beyond a certain length. It is obvious that IGTV has been engineered for smartphones, they are designed to be viewed on your handsets. It is a move that is hard to argue with, every person on the planet use their smartphones in portrait mode. On my phone, in fact, the auto-rotate option is permanently locked. Vertical videos, though initially weird, make you later question why should we hold our phones awkwardly in landscape just to consume content?

It doesn't take away from that fact that I like watching videos on my PC, but due to travelling and ease-of-use, I watch most of my content on my smartphone. While most of the websites and apps are optimised for mobile phone viewing, why shouldn't videos also be?

Whether Instagram's shoving long videos into a vertical format is a feature that should have hit the 'NO' pile, or if it fits well with platform's aesthetic is entirely up to the users to accept now.

IGTV is an app but also an Instagram feature; it is both a TV system and not one at all. Apart from being a standalone app, IGTV content will also appear in the Instagram app. Within the Instagram app, there is an icon next to Stories highlights, that takes the user into the full vertical video experience.

The approach to IGTV mimics what Instagram did with Boomerang, its standalone app for posting one-second video loops, which also exists within Instagram. Instagram had said that it wants to provide an option to choose, rather than force users into a separate experience. This also means that creators can use the IGTV service without alienating an Instagram-centric audience or be alienated themselves.

It is not clear whether the cross-integration will stay in the future, but as of now, it appears to be a way to make Instagram users accept the new app, or feature, whichever they prefer.

Coming to the usage, there are some fun additions to the Instagram's existing tools. There is a new scrub bar on videos, which means that I didn't have to begin every video from the start and wait for it to loop in case I missed something I wanted to watch.

The new features are integrated quite smoothly with other Instagram features. I was able to use stickers and filters, also share videos via messages quite easily. Currently, there is no option to share the IGTV videos to your Facebook feed, though you can cross-post them to a Facebook page.

Notably, the IGTV videos have been organised in "channels", that are essentially the same as Instagram profiles. When I signed up for the IGTV service, the app asked me to create a channel, and that channel was matched with the profile that I use on Instagram.

Interestingly, most of the popular Instagram profiles in the world, already seem to have an IGTV channel. Kim Kardashian West has already posted a two-minute plug of her KKW pop-up beauty shop in Los Angeles. Pop star Selena Gomez had released a short horror video directed by Petra Collins.

Meanwhile, several media companies including BuzzFeed - and of course Gadgets 360 - have posted several videos on their channels.

While Instagram wants celebrities to join the IGTV app, it surely wants regular users to get involved as well. So you should be able to make your own IGTV programming. But, the IGTV app does not make it immediately clear how to actually do it. There are several steps that include some advice from the app on how to create a channel and upload videos. It worth is noting that unlike Instagram, IGTV does not have to option to let users create videos. For now, IGTV doesn't allow video recording from the camera like Instagram. You will have to record it using some other and then upload it via Instagram/ IGT. 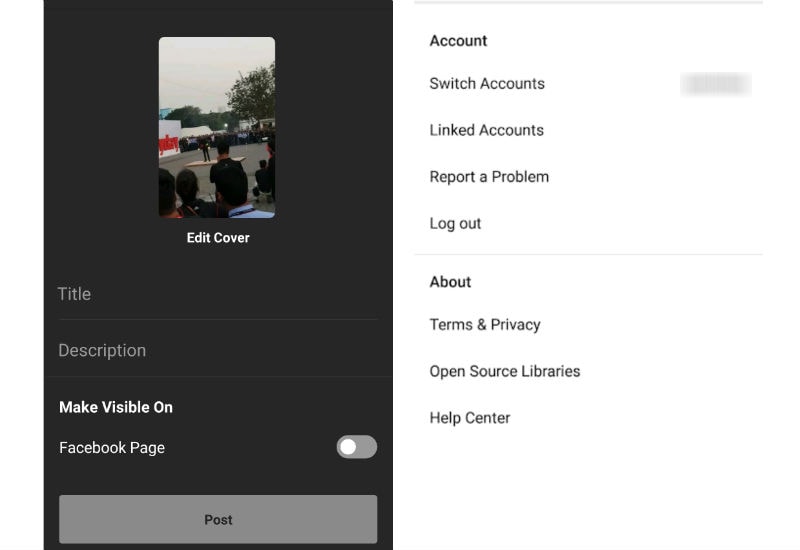 One of the bigger problems with the IGTV app is that it works terribly under low-bandwidth conditions. I tried it over a 2G network in one case, and while travelling in another. Both the times, the videos took too long to load. Even small videos of under 5 minutes took a while to finish watching, with frame drops and stuttering along the way.

So, who is IGTV for, really?
IGTV makes a lot of sense for Instagram. According to a recent Pew Research survey, Instagram lags behind only YouTube when it comes to usage among teens in the US.

This is why Facebook has been cloning features from its rivals. For instance, the younger audience quite loved Snapchat's ephemeral quality of perishable messages. Facebook 'borrowed' that feature. From lens and stories to messenger codes and other features, Facebook has been integrating a lot of them into all of its properties. But, YouTube is still kicking Instagram's butt by providing long-form videos. And with IGTV, it wants to retain people - especially teens - who leave Instagram to do other stuff, such as watch longer videos of YouTube.