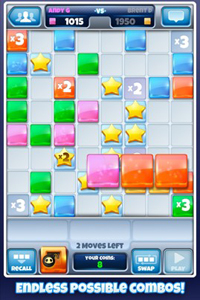 For those who play the popular, Scrabble-inspired game "Words With Friends," the latest title should feel familiar. Instead of using letters to form words, though, players get groups of colorful blocks that they must match with blocks of the same color.

The game is being released Wednesday for the iPhone and the iPad. It will initially be available only in Australia and Canada. It will come to the U.S. and other countries in the coming weeks, though Zynga Inc. isn't giving dates yet.

Like other mobile games from Zynga, "Matching With Friends" will have a free, ad-supported version. A paid version will cost $2.99, though initially it'll be available on sale for $1.99.

Paul Bettner created the "Words With Friends" franchise with his brother after working on hardcore games such as "Halo" for more than a decade. Zynga bought their company, Newtoy, in 2010.

Bettner said that for new game ideas, he likes to think about things that he enjoyed when he was a child, or things outside of the technology world.

"Matching With Friends" originally started out as a picnic-inspired game that had players matching picnic baskets and other little items with each other. It later changed into blocks.

To Bettner, the "With Friends" games present a way to let people interact with each other in a way that's even lighter and less intrusive than text messaging.

"You know that you have a connection with someone when you are playing a game," he said in a recent interview. "But you don't have to be talking to them about something. ... You have the opportunity to connect more deeply with them, but you don't have to."

It's kind of like playing a board game around the dining table.
Comments