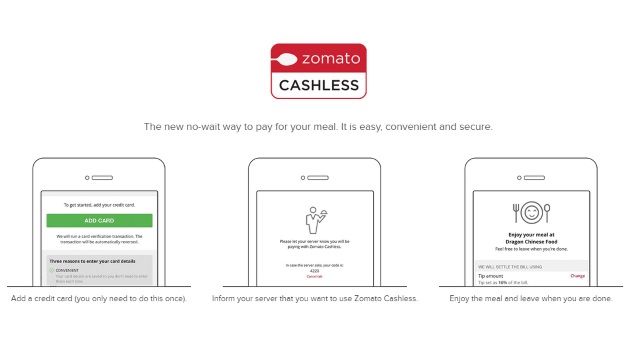 Zomato as promised has launched its cashless payments service in restaurants, starting with Dubai.

The company's dedicated cashless page reveals that the feature is currently only available in Dubai and consumers in the country can now pay using Zomato Cashless at over 120 participating restaurants.

The company also promises that it will add more restaurants to its list and will brings cashless payments to more cities very soon. Currently, the feature is only available on the Zomato iOS app, though it will be available on the Android app soon.

With the new Zomato Cashless feature, consumers can go to a partner restaurant and check-in with the Zomato app - each user has a unique identity, and the restaurant connects that to the bill. Of course, the system is not fully automated - you don't order through the app, but rather, inform the staff at the restaurant of your mode of payment at the time of ordering. The payment method integrates with the billing system of the restaurant, so the diner can order food as he normally would - and the billing happens automatically in the background.

Restaurant listings website Zomato's Founder and CEO, Deepinder Goyal back in December had elaborated more about the cashless feature to NDTV Gadgets and even revealed that Zomato was also working on a chat facility which would enable users to connect with restaurants and place orders for delivery.

According to the Zomato CEO, the service will save the user's credit card details in the app, and automatically complete the transaction at the time of payment, similar to the way people around the world pay Uber.

Goyal said, "The idea here is to enable cashless payments for restaurants. The customer can process his payment of the bill through his smartphone rather than having to carry his payment card."

He had also indicated that an eventual rollout in India would depend on the performance of the service in Dubai, and perhaps other markets.