Zee5 HiPi will have over 400 influencers onboard from day one to entice new users.

HiPi is available as an integrated part of the Zee5 app

Zee5 HiPi has been launched as a new short-video platform that will join the growing list of TikTok-like offerings, including from the established players like Instagram and YouTube. HiPi will look to take on the Indian alternatives to TikTok, such as Bolo Indya, Chingari, Mitron, and ShareChat's Moj. The new platform comes as a part of the Zee5 app and is available for Android users. However, its iOS version is in the works and would come at a later stage. HiPi allows users to create videos of up to 90 seconds — along with music tracks, filters, and visual effects.

After the platform was first teased early last month, Zee5 has now launched in beta for Android users. The company has also brought over 400 influencers on board to start attracting new users.

Rajneel Kumar, Business Head of Expansion Projects and Head of Products at Zee5, told Gadgets 360 that HiPi had been in development for over a year now and was aimed to serve the “next wave of what users are going to consume.”

However, the timing of HiPi's launch is, of course, crucial as it comes in the midst of TikTok ban in the country that has already brought homegrown competitors including Bolo Indya, Chingari, Mitron, Roposo, and ShareChat's Moj to public attention. Instagram also recently entered the Indian short-video space with its Reels feature.

Instagram Reels Is Now Available in India, but Can It Replace TikTok

The experience on HiPi is just like what you'll get on other short-video platforms. It offers vertical scrolling of hundreds of videos that can be liked or shared across social media platforms. Content creators can also add music tracks in the background of their videos. Nevertheless, Kumar said that it was the content differentiation that made HiPi a different platform altogether.

“We have been known as story creators and story tellers for decades and that power of storytelling and creation is what we are bringing onto the HiPi platform, which is very unique and different from any other competition in the market, who are primarily all technology companies,” the executive said.

HiPi will bring a variety of content – meeting the diverse demographics, geography, as well as the type of handsets that exist in the country, Kumar added. However, apart from the content, it is moderation that makes the Zee5 platform slightly different from other similar offerings.

“Unlike other platforms that have either takedown or blocking of users and provocative content or inappropriate content, what we have invested in is that every single content piece which is there on the platform is moderated before it goes forward,” said Kumar.

The content moderators behind HiPi are said to be a mix of both in-house and third parties. “There is a team that is core to Zee5 that eventually is the leadership, which looks at the content and there is a mix of people that we work with, who work for us – might not be on the payroll but work for us to set up this entire moderation,” Kumar told Gadgets 360.

Zee5 has also designed an artificial intelligence (AI) based moderation system that helps the moderators and make the turnaround time for all the videos the platform receives from its creators faster.

Further, notably, Zee5 HiPi will only allow creators of age 18 or above on its platform; however, apart from the basic age verification where platforms simply ask a creator to enter their age or date of birth, it is unclear how it plans to enforce this rule.

Kumar also stated that the team behind HiPi also looked over the competition, including TikTok, to understand what should be there for consumers as well as content creators.

Certified creators
To give some distinction to creators who put in effort to frequently create new content, HiPi has a model of certified creators. Kumar of Zee5 told Gadgets 360 that there were certain protocols that creators were required to follow to become a certified creator on the platform. The team also uses a popularity index on the basis of which it certifies those creators.

Once a creator gains certification by the HiPi team, they are able to access a creator's dashboard that provides insights about the content, number of likes and followers they have added as well as the comments received and the advertising revenue share earned through videos. 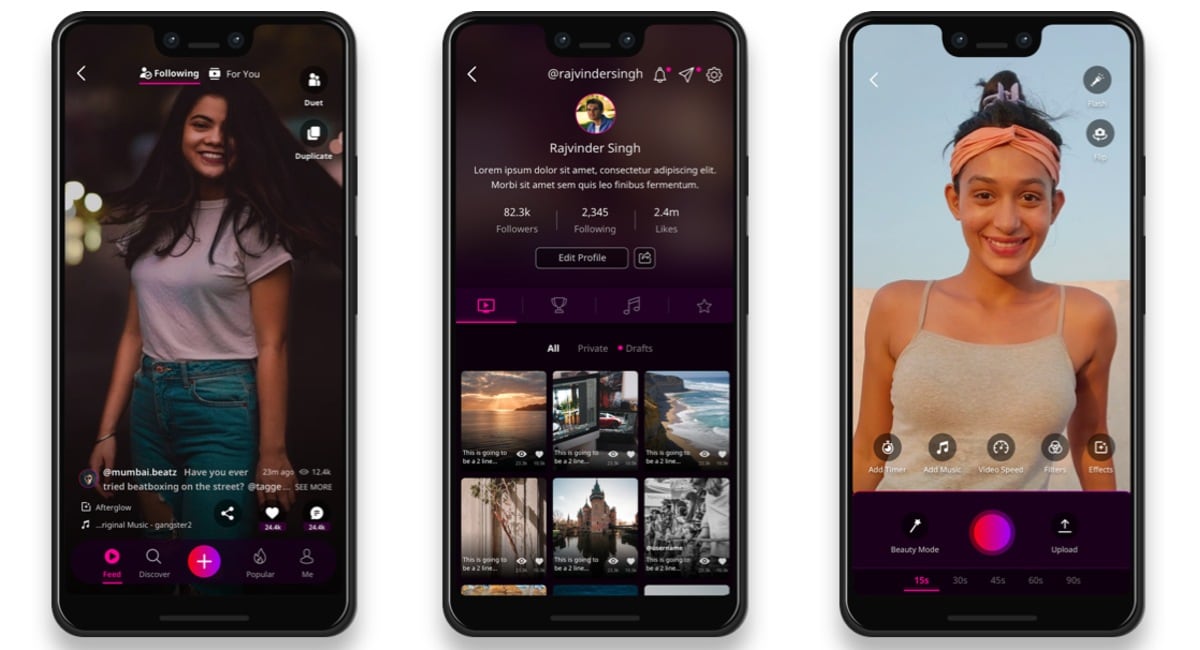 In terms of revenue share, Kumar said that the team decides that part on an individual basis. He, however, emphasised that apart from the revenues the platform provides to certified creators, it offers the reach of nearly 8.5 crore monthly active users that are there on the Zee5 app.

Why does HiPi not have a standalone app?
HiPi is indeed a platform for short videos that isn't something similar to what's already available on Zee5. But nonetheless, it has been provided as an integrated part of the Zee5 app only. Zee5's Kumar said that instead of offering a standalone app, the team decided that move essentially to provide an identical experience irrespective of hardware.

“India has some fundamental challenges,” he said. “These challenges are about the type of handsets which users have. And these handsets or while the display might be decent, but the challenges essentially exist on the processing power of the devices as well as the space that the devices have.”

The team at Zee5 also conducted a research on users to test what content type they consume as well as the devices they use for consuming that content. That research showed that users at a mass level would prefer to have a single destination where they were able to cut across various content types, Kumar said.