YouTube Music (ad-supported), YouTube Music Premium (ad-free), YouTube Premium (ad-free) have been launched in India. With the launch, India's music and video streaming space has become even more crowded and now includes all major global providers as well as several home-grown services. Both YouTube services were originally introduced in June last year in seventeen countries, including the United States, and have taken over eight months to reach the Indian shores.

According to YouTube, YouTube Music will be available both as a standalone mobile app and a Web-based desktop interface that is designed for music streaming. The service offers original songs, albums, thousands of playlists, and artist radio as well as YouTube's own catalogue of remixes, live performances, covers, and music videos.

The company is offering two tiers of the service — YouTube Music, which is free/ ad-supported, and YouTube Music Premium, which is paid/ ad-free, like most other music streaming services in the market. YouTube Music Premium subscription will allow the users to play songs and videos in the background with the YouTube Music app while they do other things on their smartphones, something that is not available in standard YouTube experience. Additionally, the paid subscribers will also get offline downloads.

YouTube Music Premium subscription has been priced starting Rs. 99 a month. There is also an introductory offer of three months free subscription for YouTube Music Premium, but it will only be available to the users who have never previously tried or used any of YouTube or Google's music streaming services. The company also offers a family plan, which can be shared among a total of six family members, at Rs. 149 a month. Like the single user plan, the family plan also comes with a one month trial.

The company is hoping to build on the back of the already massive YouTube following in the country, which regularly uses the streaming service to listen to music. India's love for music comes as no surprise for the company, which has seen T-Series, a music label and movie production house from the country, almost overtake PewDiePie, the biggest YouTuber in terms of subscribers. T-Series' YouTube channel primarily uploads music videos and movie trailers.

"India is where the multi-lingual music scene thrives. It's interesting to note how Indian artists have consistently claimed top spots over the last few months in the Global YouTube Top Artists chart," said Lyor Cohen, Global Head of Music, YouTube, in a statement. "With YouTube Music, we are hoping to bring the best in global and Indian music to millions of fans across India, and give them an immersive music experience, with the magic of music on YouTube."

YouTube says that the paid subscribers of Google Play Music will automatically get access to YouTube Music Premium and they don't need to pay anything extra. The YouTube Music app is available for both Android and iOS platforms and can be download from the app stores of the respective platforms.

YouTube Music will be going head-to-head with the likes of Amazon Music, Apple Music, Spotify, JioSaavn, and Gaana in the country. Almost all of these services, except Amazon Music, have paid plans starting Rs. 99.

Moving on to YouTube Premium, the second service being released by the Alphabet-owned company, it will be available to the Indian subscribers for Rs. 129 a month and includes a free membership to YouTube Music Premium. In addition to the YouTube Music Premium benefits, YouTube Premium subscribers also get access to YouTube Originals like Cobra Kai, an ad-free experience with background playback of videos with the regular YouTube app, and offline downloads. 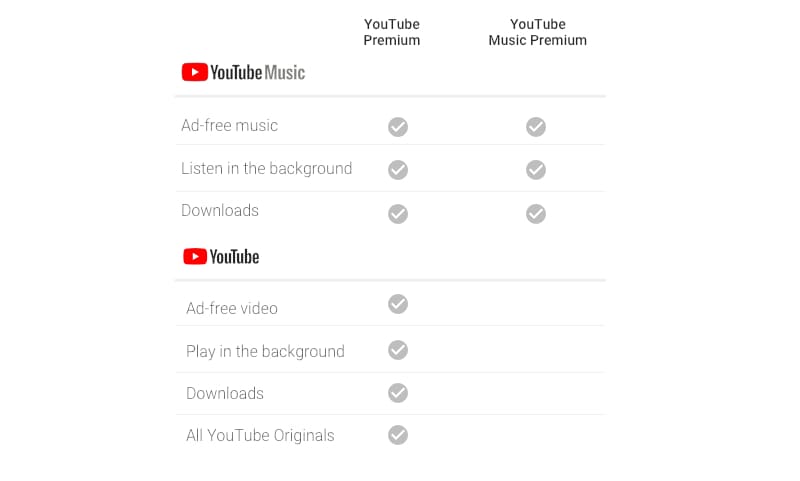 Given the limited catalogue of the original content on YouTube Premium, the service is not really a competitor to any of the video streaming services like Netflix or Prime Video and will only look enticing to the consumers who want to enhance their YouTube watching experience with ad-free and background playback, more than getting any extra content.

Access to YouTube Premium doesn't require any separate apps and the regular app can offer the ad-free experience and other benefits depending on the subscription status of the user.

Further reading: YouTube Music, YouTube Premium, YouTube, YouTube Music Premium, Google Play Music, Google Play Movies
Gaurav Shukla Email Gaurav Gaurav Shukla is a part of the Gadgets 360 news team and based out of New Delhi. Gaurav is responsible for making sure Gadgets 360 news section is updated with the latest happenings from the world of science and technology. When he is not editing or assigning stories, Gaurav writes about mobile devices, social media, and the Internet at large. With over 11 years of experience in tech journalism, Gaurav has reported on everything from the first Android phone to reach the Indian market to how the ...More
Mi 9 Transparent Edition 8GB RAM, 256GB Storage Variant Confirmed, Expected in Late March
PUBG Mobile 0.11.5 Beta Update Out Now: Here's What's New