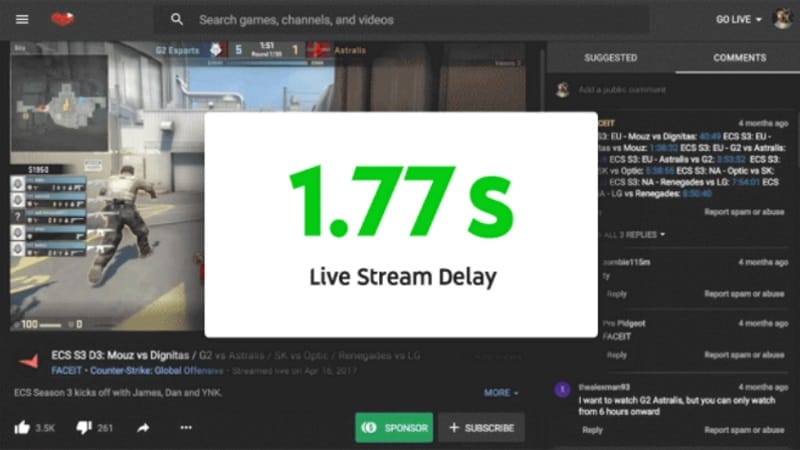 YouTube has now introduced more options to its live streaming service and it can be termed nothing less than an overhaul. YouTube Live now has an "ultra low-latency" feature that makes it easier for the users to interact with their audiences in real-time. Apart from this, the live streaming service from YouTube has also received new chat moderation tools. Finally, iOS users will now be able to live stream through more apps from their devices, with the YouTube app now supporting Apple's ReplayKit framework.

Talking about the newly introduced ultra low-latency feature first, the company says in its Creators Blog that it makes it possible to stream videos with just a couple seconds of latency. This means that the users will be able to answer fan questions and get input from viewers faster than before. The company says that the new feature is easy to set up and doesn't require any special software or encoders to work.

The new moderation tools added to YouTube Live allow users to pause the chat feed by simply pressing and holding the "alt/option" button on their keyboard. Users can then hover over messages to remove or approve the chat messages with a single click. Also, users can delegate a moderator for their live chat to flag or hide messages. Separately, users can choose to hold potentially inappropriate messages, which will be identified by the company's own system, to approve, hide, or report later. There is also an option to block certain words or phrases, if the user chooses to do so.

Coming to the app streaming bit, with Apple's ReplayKit, users will now be able to stream live from more apps as the company has brought the functionality to the main YouTube app. While users could already live stream from apps through YouTube Gaming earlier, as the feature has been added to the main YouTube app, any app that supports ReplayKit can now be streamed live by iOS users.

"You'll also be able to use your phone's microphone and front-facing camera to add your own video and audio commentary to the stream," the company said in its blog post.