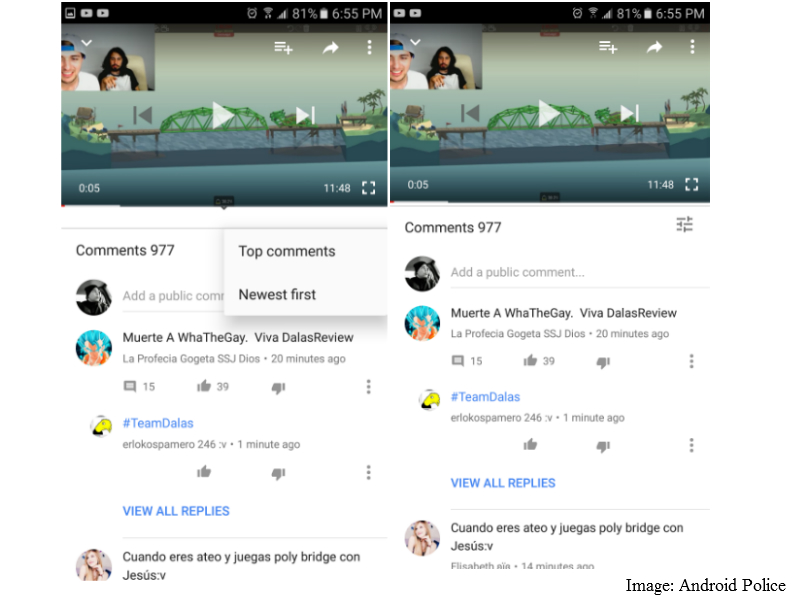 YouTube is looking to revamp the way comments look on its Android app. The company is testing a new UI, which will show likes, dislikes, replies, and even lets you sort them.

A few select users are seeing a new comment UI in YouTube for Android. The new interface now supports likes and dislikes. Essentially it supports all the features that are available on the desktop, including the number of replies a comment has got, and the ability to expand those replies on a separate page.

YouTube for Android currently only shows comments in the order of the time it was posted in - and that's about it. The only thing users could do was add their own comment to the video.

However, Android Police reports that few users are seeing an improved interactive comment UI. It also has a switch that sorts the newest comments on top. The new comment interface is not yet ready for general release, and is just in its initial server-side test phase. If testing is successful, we can expect it to become the norm for all YouTube for Android users.

Just to compare, YouTube for iOS supports likes, and replies. It doesn't have the option to dislike, but does have the sorting toggle to let users choose between newest comments and top comments.

YouTube recently also announced its plans to bring live streaming to Android and iOS. For starting a live video on the smartphone, users will have to tap the big red capture button in the corner, select an image to use as a thumbnail, and then broadcast live to followers. YouTube is already testing this with few YouTube channels like AIB, and plans to do a mass rollout soon.