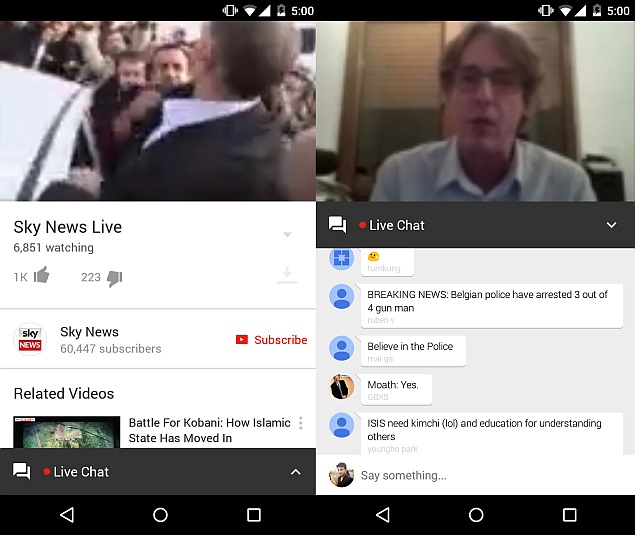 YouTube v6.0 for Android, which introduced the Material Design UI to the app, brings an interesting new feature. It adds the Live Chat option on mobile for live streaming videos - an option that was earlier limited to the desktop.

The Live Chat option is seen at the bottom of the live streaming video on YouTube v6.0 for Android, and users will be able to read in the live conversational threads, just like the YouTube website on desktop. Users will be able to participate in live chats if they are signed-in.

Users will need to tap on the up arrow or slide the bar to the top of the window, from the bottom 'Live Chat' bar (see above). First spotted by Android Police, the feature should be available to all users running YouTube v6.0 and above. Users who still haven't received the updated app can visit APK Mirror to download the signed apk file.

As part of its 'apk teardown' of the YouTube v6.0.11 app last week, Android Police also spotted code that indicated the Google-owned firm will soon introduce two new abilities for uploaders - to replace the existing audio track on their videos with a new one, and auto-resume uploads.

Meanwhile, the company is also reportedly testing an Autoplay feature that will allow users to stream the next suggested video automatically.

As discovered by an Indian blog Technomedia, the new 'Autoplay' option will sit at the top left of video list. The user will be able to turn on/ off the toggle switch to enable and disable the feature.

In full-screen playback mode, users will see the text as 'Up Next' followed by the video name, on the top of video as loading animation. Also, if the browser is not being used for some time, it pauses the Autoplay and post the message, "Busy? We've paused autoplay", notes the report.

Last week, the company started rolling out its new offline feature for India. Users will now be able to download videos to their Android device for offline playback. The feature, which was announced earlier this year alongside the Android One, is ad-supported and available for Android and iOS devices.
Comments