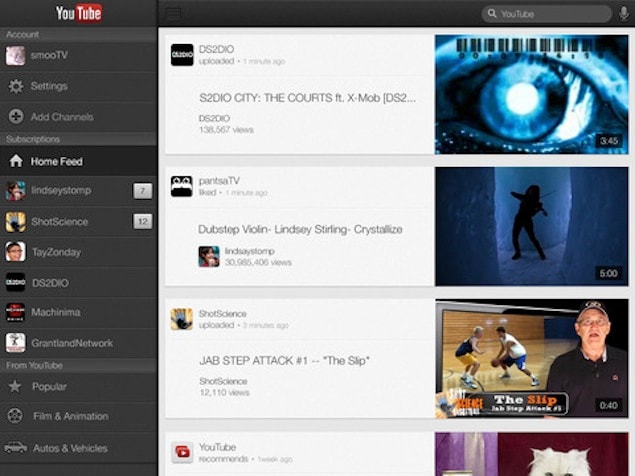 Google has updated the YouTube app for iOS. The app now features an interface optimised for the iPad, iPhone 5 and includes other new features like AirPlay support.

Google originally released the YouTube app for iPhone back in September after Apple announced its decision that iOS devices will no longer ship with the YouTube app preinstalled. The relationship between Google and Apple has frayed over the years, as the shift from PCs to mobile devices has increased the competition between the two companies.

YouTube was among a handful of apps that came pre-loaded onto the screens of Apple's mobile devices since the original iPhone was introduced in 2007. The pre-installed YouTube app - which was actually built by Apple using YouTube standards - was not as full-featured as YouTube's own website, but it was popular.

The latest update is good news for iPhone 5 and iPad users as they can now enjoy their favourite videos on an interface that's optimised for these devices. The app also adds AirPlay support, that enables iOS (and other) devices to stream music to AirPlay-enabled receivers like the Apple TV.

Other new features include the ability to add or remove videos from playlists and improved accessibility.