YouTube for Android has been spotted to have added an Incognito mode for some users. The latest change brings the YouTube app to the series of Android apps that are offering the dedicated mode to abandon recording of history and offer a secret experience. All the popular browser apps have it, as does Gboard. SwiftKey received an update with the Incognito mode back in November 2016. The Google app for iOS also added the mode to offer a private Web searching experience back in September 2016. Of course, if you aren't signed into YouTube, there is no history being recorded anyway. The new Incognito mode for the app essentially makes it easier to sign out for all practical purposes without actually signing out - thereby pausing your watch and search history - and lets you log back in with a click of a button. As reported by Android Police, the YouTube team is testing the Incognito mode on the YouTube app for Android devices. The new change, which appears to be rolling out for select users through a server-side update, is designed to disable the watch and search history from the active session. It has been spotted that a dedicated Turn on Incognito option will be available once you tap your avatar from the top-right corner of the YouTube app. This option will sit in place of the Sign out option as the latter will be mingled with the Switch account option. 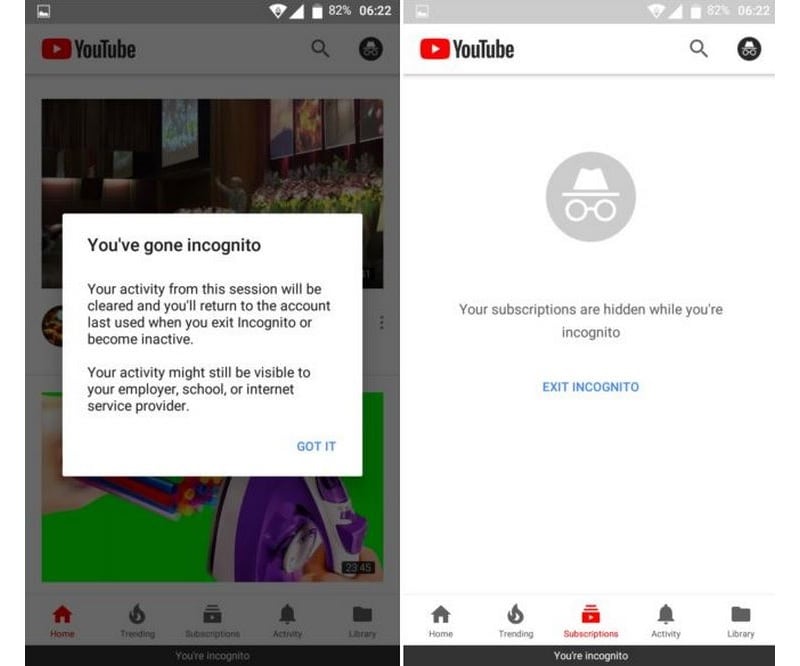 Once enabled, the Incognito mode on the YouTube app will clear the activity from the current session and will hide all the existing subscriptions. It is worth noting here that the activity will still be logged at the employer, institution, or the Internet service provider (ISP) end, depending on which network the user is logged onto.

The screenshots posted by Android Police folks shows that the Incognito mode on the YouTube app is similar to what we already have on most browsers. It notably transforms your existing avatar with an Incognito icon to notify you that you've not signed out but watching YouTube content under the Incognito mode.

It is unclear when the YouTube app will receive the Incognito mode for all Android users. Of course, YouTube already offers an option to pause watch and search history that you can access by going to Settings > History & privacy, and the latest feature just looks to make it easier for users to do so.

That being said, you should have the latest YouTube app on your Android device in order to get the new experience that is rolling out for select users over-the-air. You can download the latest version from Google Play or sideload its APK file directly from APK Mirror.