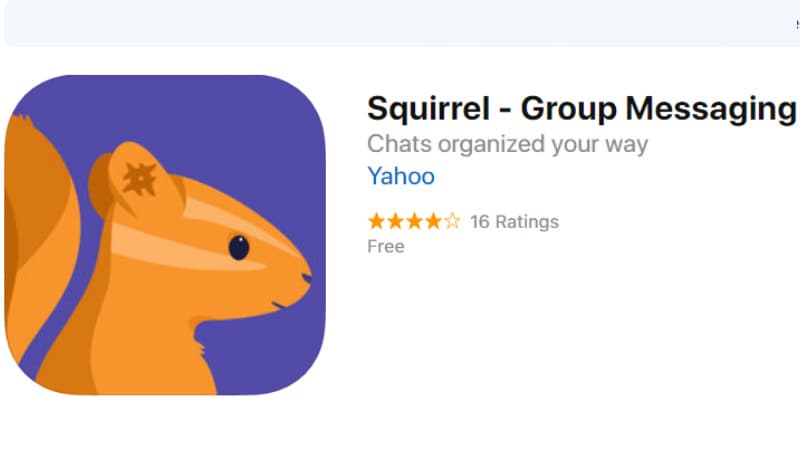 Yahoo has just entered the densely competitive market of messaging apps by releasing its own new group chat app named Squirrel. The app - currently still in testing - is now listed on Google Play and the App Store, and is invite-only for now. If you wish to start using the app, you need a friend who already has the app on their device to invite you into a group for you to be able to use it. Squirrel focuses mainly on group chats, and has many features that let you organise and streamline conversations with several people.

Judging by the features mentioned in the description on Google Play, Squirrel looks to compete with the likes of Discord and Slack, apart from of course regular messaging apps with group chat features, like WhatsApp and WeChat. The app will let you create rooms for specific people and topics, and there is one main room where the entire group can talk and make announcements. There's a mute switch that allows users to avoid notifications of rooms they wish to not participate in. The app should be useful in business organisations and companies, where multiple conversations are aplenty.

Squirrel also has secret rooms for private chats with few people in the group, and customisable reactions to create your own one-tap reactions. Of course, there is a feature called Blast which will percolate even through muted groups to give users notifications of important messages. Just like all the other apps out there, Squirrel allows you share photos, documents, or links with people in the group as well. There is also a separate section where all these are stored for a comprehensive scroll. Similarly there is also an activity view that shows you where all you are mentioned in one view.

Yahoo was sold to Verizon for $4.5 billion ending the company's 21-year history as a publicly traded company. It is a part of Oath, a Verizon subsidiary. Yahoo's continuous decline even after several acquisitions forced the company to make this decision. Formerly known for being the Internet's best-known brands, the company faded in importance, while Facebook, Amazon, Google, and others became big tech giants. Of whatever remains of the company, this app is the latest product, and it remains to be seen whether Squirrel is welcomed in the competitive market or not.

Oath confirmed to TechCrunch that the app is still in testing, and a spokesperson provided the following statement describing the motivation to make the app: "At Oath, we're always looking for creative ways to add value to our members' lives. We listen closely and frequently test new product ideas based on research and feedback. Right now we're experimenting with a new invite-only messaging app focused on improving group communication in everyday life."