Windows and Windows Phone Store Have Over 525,000 Apps Combined: Microsoft

The Redmond giant on the "by the Numbers" page, which features a collection of visual statistics about Microsoft's products and services, writes, "There are more than 525,000 apps in the Windows and Windows Phone Store combined. Hundreds more are added every day."

A Microsoft spokesperson confirmed the figures to Venture Beat on Friday, saying, "There are more than 527,000 apps in the Windows and Windows Phone Stores combined. This data is as of September 30, 2014." 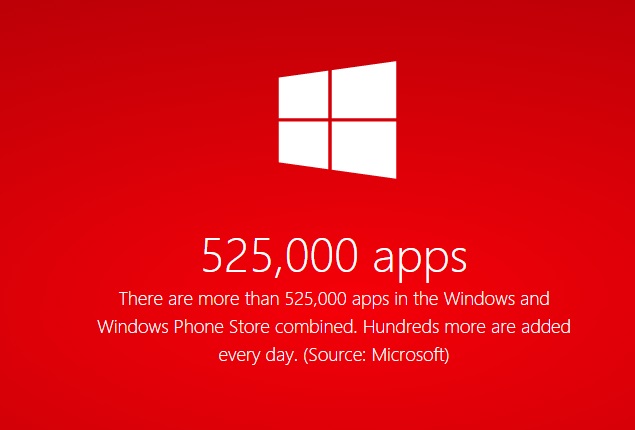 Notably, Microsoft's Windows Phone Store back in August had more than 300,000 apps. The Windows Store, on the other hand, passed 150,000 apps in March, as noted by Venture Beat.

Some of the other statistics shared by Microsoft reveal that Office 365 Home and Personal have a combined total of 7.1 million subscribers; over 250 million people have an OneDrive account, and Xbox Live has more than 48 million members in 57 countries.

Another figure claimed by Microsoft is that more than 1.2 billion people use Office, saying "That's 1 in 7 people on the planet."

Notably, a recent report suggested that Microsoft surpassed Exxon Mobil to become the second most valuable company behind Apple.