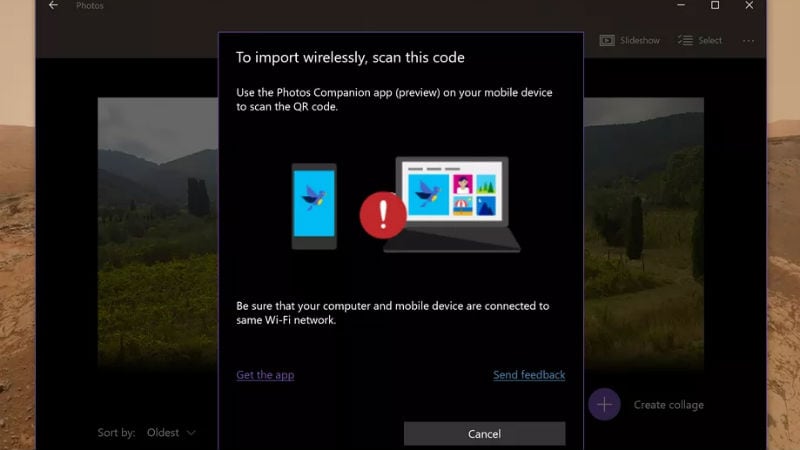 With a strong presence of over 600 million devices, Windows 10 is certainly one of the most successful computing platforms. Microsoft is now reportedly preparing a companion app for the default Photos app on Windows 10. The new companion app is reported to be designed for Android and iOS devices to let mobile users quick transfer their memorable mobile pictures to a Windows PC.

The new photos companion app, which is spotted by Italian blog Aggiornamenti Lumia, appears to establish connectivity between a PC and a mobile device using a common Wi-Fi network. For importing content, a QR code emerges on the desktop screen that enables the wireless transfer.

Microsoft is yet to release the reported photos companion app for Android and iOS platforms. Also, it is presumable that the wireless transfer feature will be initially to Windows Insiders to test its success ahead of a public launch. You can meanwhile use OneDrive to view the memories captured from your mobile devices right on your desktop. Microsoft added the ability to create albums on OneDrive automatically based on time and location back in July last year. Microsoft is also testing an Apple AirDrop feature in Windows Insider Preview builds, to share data between PCs.

In addition to the companion app support, the Photos app on Windows 10 is said to receive some improvements as well. Microsoft is reportedly developing premium content such as special effects, themes, and music that can be added to photos and videos directly from the Photos app. Also, there are stickers that can be used on top of photos to create new stories. These features are expected to be available on Windows 10 Insider builds in the coming months.

CEO Satya Nadella at Microsoft's annual shareholders meeting on Wednesday revealed that Windows 10 is now running on more than 600 million devices. Apart from desktops and notebooks, the platform is available on Xbox One consoles, HoloLens headsets, Surface Hub devices, and Windows 10 Mobile-based smartphones.

Although Microsoft recently dropped its focus on developing new mobile devices, there are plans to continue its developments in the smartphone market. The Redmond company already has some of its key apps for Android and iOS devices. Amongst its native apps, Microsoft Edge is yet to receive a final build for mobile devices other than the ones running Windows 10 Mobile. Virtual assistant Cortana is also in the pipeline to enable Apple's Continuity-like feature on Android and iOS devices. This would give smartphone users another reason to pick a Windows 10 PC.