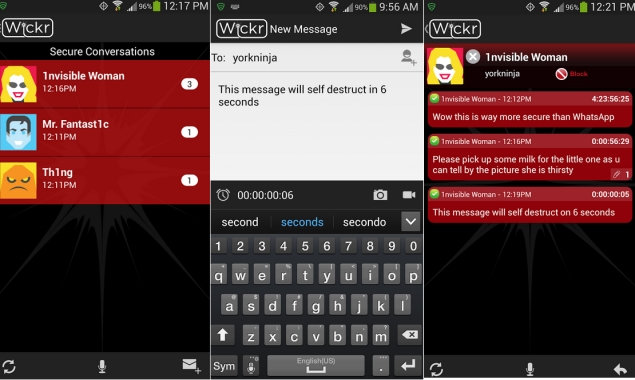 "Wickr not only offers the most secure form of correspondence but also helps protect our users' contacts as we anonymize this information before it leaves the senders phone," said startup co-founder Robert Statica.

"Wickr does not collect any personally identiable information on users nor can we read any messages or contents sent through Wickr, therefore, no criminal or rogue government can take them from us."

Wickr has not released details on numbers of users, but reported seeing "exponential growth" since releasing a free version for Apple mobile devices in June of last year.

The free version of Wickr that debuted on Monday was tailored for devices running on Google's Android mobile platform that dominates the smartphone market.

Wickr was fielded as a more secure option to messaging platforms at online venues such as Skype, Facebook, SnapChat.

"The release of Wickr Android for public beta comes at an important moment in history as this right to privacy is challenged by governments, corporations, lone criminals throughout the world," Statica said.

"Bound by the strong belief that private correspondence is a universal human right, San Francisco-based Wickr aims to bring free private communication to users across the globe."

Wickr co-founder Nico Sell envisions building a "geek utopia" where people hold the power when it comes to who sees what they share on the Internet or from their phones.

"Freedom: there's an app for that," Sell said in an earlier interview with AFP.

Wickr's business plan is to have hundreds of millions of people globally use free versions of the application while a small percentage opt to pay for premium features such as being able to control larger data files.

More information about the application was available online at mywickr.com.

Yahoo, Google, Facebook, and Microsoft are among Internet firms pushing for permission to disclose more details to users about demands for data made in the name of fighting terrorism or other threats.

Technology titans have been eager to bolster the trust of its users by making it clearer what has actually been demanded by and disclosed to US authorities.

A vast National Security Agency surveillance program was exposed in a series of bombshell media leaks in recent months by former US intelligence contractor Edward Snowden, who has been granted temporary asylum in Russia.

Documents divulged by Snowden have shown the NSA conducts a massive electronic dragnet, including trawling through phone records and online traffic, that has sometimes flouted privacy laws.