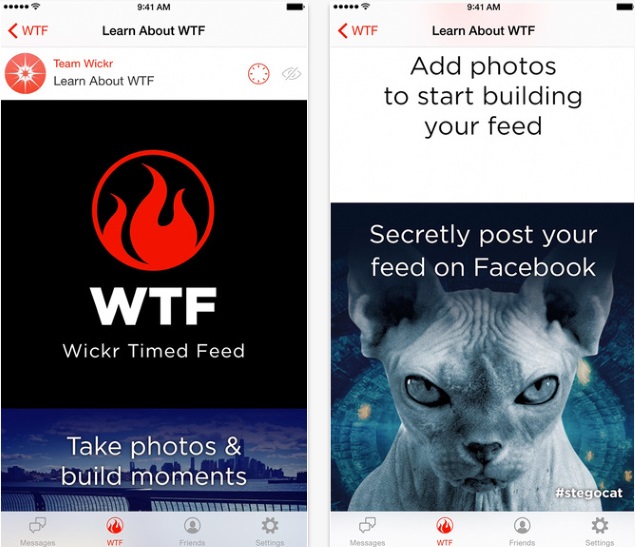 Wickr Timed Feed (WTF) hosts pictures in a way that keeps them in the control of those doing the posting, and the service gathers no data about images, according to co-founder Nico Sell.

Posted pictures self-destruct after 24 hours. "This is truly a breakthrough," Sell told AFP. "Essentially, this is our Instagram-killer."

Wickr has been downloaded more than five million times in 196 countries since the start-up launched in 2012, according to Sell.

The ultra-private messaging application lets people share messages or pictures that are encrypted in a way that doesn't even let Wickr see them. People also set how long they want messages to last before self-destructing.

Versions of the application have been released for Android and Apple mobile devices as well as for computers powered by Macintosh, Windows or Linux software.

WTF was added to the free Wickr application made for Apple devices.

"We are taking a very complex spy tool, adding a joke and making it something my kids are going to use a hundred times a day," Sell said.

Sell describes steganography as the art of hiding messages in plain sight. When Wickr pictures are posted to Facebook, what appears at the social network are adorable kitten photos instead of the personal images being shared.

Friends with Wickr apps installed can double-click on kitten pictures to see what was actually shared online. Those not in a person's Wickr circle, however, will only see baby cats.

Even Facebook servers never see the real shared pictures, offering no opportunity to save copies, target ads, collect data or anything else, according to Sell.

Hacker mom's solution
WTF was inspired by Sell's eldest daughter. The teenager wanted to connect with friends on Facebook but met resistance from her mom, who has been a long-time organizer of the infamous Def Con hacker gathering that takes place annually in Las Vegas.

"She knows I don't like Facebook and asked mom to find a way to do it safely," Sell said of her concerns about privacy and control of personal information at popular social networks.

"This way, Facebook isn't going to control your photos; they will just see the kitty cat photos."

Wickr chose kittens because the Internet is rife with cat photos, and it seemed in keeping with the spy lore to hide images behind a type of picture popular online.

Sell said that WTF may eventually do dog pictures, but as an in-app purchase. For now, kitten pictures will serve as the inside Wickr joke.

Worries about snooping by criminals, spies or governments have fuelled interest in Wickr, according to Sell.

"We are the only secure messaging app that has not had a successful attack," she said. "We are the last man standing."