WhatsApp updated its iOS app on Tuesday adding the much-awaited voice calling feature that was rolled out to all Android users less than a month ago. 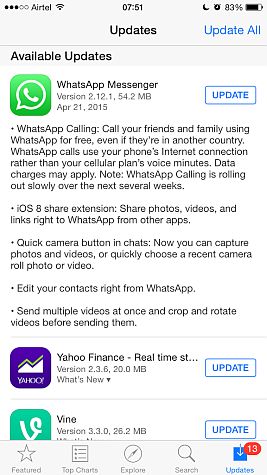 The App Store listing notes that WhatsApp Calling will roll out to all users slowly over the next several weeks.

Another major highlight of the v2.12.1 update is the addition of iOS 8's sharing extension that enables a user to share images, videos, and links to WhatsApp contacts from any other app. The update also adds the quick camera button in chats that allows users to launch the camera button right from the chat screen to share with contacts.

(Also see: WhatsApp Voice Calling - Everything You Need to Know)

Other additions include the ability to edit contacts from the WhatsApp app, send multiple videos at once, and options to crop and rotate videos before sharing them.