WhatsApp last week began rolling out the voice calling feature to all Android users, while iPhone users are still waiting for the feature.

Leaked screenshots claimed to be from a jailbroken iPhone running the WhatsApp v2.11.17.444 beta app show off the UI of the WhatsApp voice calling feature on Apple's platform. Received by BGR India, the screenshots show a UI that is in-line with the interface spotted last month, as well as with a hands-on video (seen below) released by an Italian site last week.

The leaked WhatsApp for iPhone screenshots show mute, message, and speaker options while in-call, with 'WhatsApp Call' clearly marked on the top left of the calling screen.

Notably, the current WhatsApp version available to download from the App Store is 2.11.16 tipping that the voice-calling feature will be rolling out with the next app update. 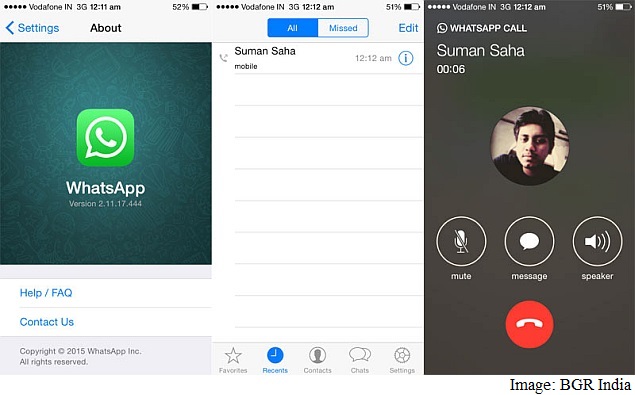 Prior to this, some WhatsApp iPhone users had reported the presence of call buttons in an app version available via the App Store. Spotted back in February, two call buttons were visible in the WhatsApp for iPhone app. These buttons had then only brought up the standard iPhone dialler, rather than placing a VoIP call through WhatsApp.

One button was placed near the contact name within a chat conversation, featured the phone symbol, while the other was present on the left side below the top pane, and read 'Call' - these buttons are also visible in the latest screenshots. The new buttons were definitely new addition to the interface, and seem to be independent of the regular call feature via the dialler, which was still accessible when the user opens a contact's info page and navigates to the phone number.

It's worth noting that WhatsApp rolled out the voice calling feature in short phases with Android being the first platform to receive it.