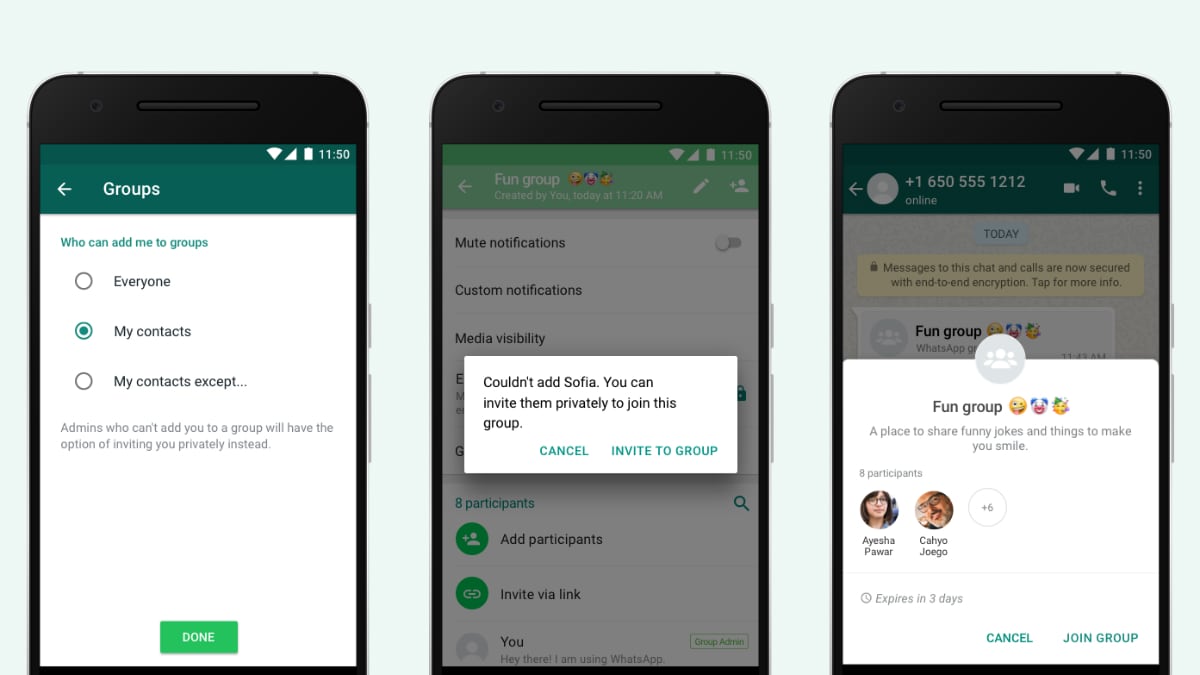 WhatsApp has included the "My Contacts Except..." option for both Android and iPhone users

WhatsApp on Wednesday announced that it has started rolling out the updated group privacy settings globally. The new development, which essentially provides you with additional control for who among your contacts can add you to a group, was initially spotted for beta users. The Facebook-owned company also late last month brought an update to the WhatsApp for iPhone with the new privacy settings for select users. WhatsApp includes the new "My Contacts Except..." option that replaces the earlier "Nobody" option under the group privacy settings.

To find the updated privacy settings for groups, you need to go to the Settings menu of your WhatsApp and then tap Account > Privacy > Groups. You'll there find the My Contacts Except... option that sits next to the existing Everyone and My Contacts. It gives you the control to select which of your contacts can add you to a group on the instant messages.

If you've selected the new option from the updated group privacy settings, the admin who is restricted from adding you to a group will be prompted to send you a private invite through an individual chat. You'll have three days to accept the invite before it expires. This gives you the choice to select whether you want to join the group.

To recall, WhatsApp back in April endeavoured to prevent spam group invites on its platform by bringing privacy settings specifically for groups. The company, however, at that time brought a Nobody option to let you approve joining every single WhatsApp group to which you're invited.

But nonetheless, WhatsApp has said in a blog post that based on the feedback from the initial rollout, it has replaced the existing Nobody option with the My Contacts Except option.

"This allows you to choose to exclude specific contacts or 'select all'. This update is rolling out to users around the world on the latest version of WhatsApp," the company wrote.

Nevertheless, WhatsApp has now introduced the updated group privacy settings to both Android and iPhone users across the globe. The change appears to be available through a server-side rollout. It is, however, advisable to install the latest WhatsApp version on your device to avail the new experience.