Your WhatsApp Text Status Is Returning Next Week 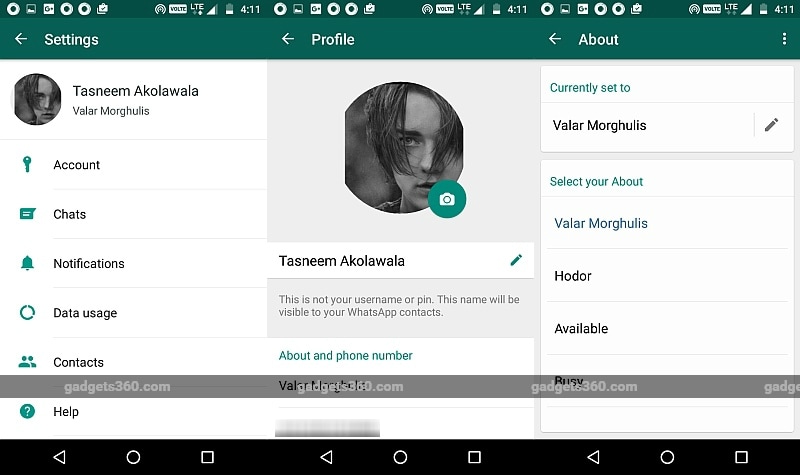 After much negative feedback from users over the removal of the old Status feature, WhatsApp has decided to bring it back. The old WhatsApp Text Status feature was first seen in the 'About' section on Android beta, and now WhatsApp has officially confirmed its arrival.

The Facebook-owned IM app told TechCrunch that the old Status feature will be revived. In fact, all WhatsApp users on Android will get the feature over the next week and iPhone users will get it soon as well.

"We heard from our users that people missed the ability to set a persistent text-only update in their profile, so we've integrated this feature into the 'About' section in profile settings. Now, the update will appear next to profile names anytime you view contacts, such as when creating a new chat or looking at Group info. At the same time, we're continuing to build on the new Status feature that gives people fun and engaging ways to share photos, videos and GIFs with their friends and family throughout their day," the company issued a statement to the publication.

This WhatsApp Text Status feature will work just in the same way as it was seen on Android beta version 2.17.95. Users will be able to set a text WhatsApp Status in the 'About' section which will change only when you want it to. Your contact list will be able to see the Status message by opening your contact, when starting a new chat thread, or viewing group info.

In any case, the new WhatsApp Status stories feature isn't going anywhere and will remain a constant in a separate tab. You can add photos and videos that disappear in 24 hours, just like Snapchat. The tab also lists all the new updates from your contacts in the same format as you see on Snapchat. Unfortunately, there's no way (yet) to disable this WhatsApp feature completely.

Facebook also introduced a similar feature on its Messenger service, named 'Messenger Day'. This feature also lets you post photos and videos that disappear after 24 hours, but it's a little more invasive than WhatsApp as it changes a lot of the interface behaviour jarring people's habitual patterns.