WhatsApp Testing ‘View Once’ Feature for Images, Videos That Disappear After Seen

WhatsApp’s ‘view once’ feature is currently only available to Android beta testers. 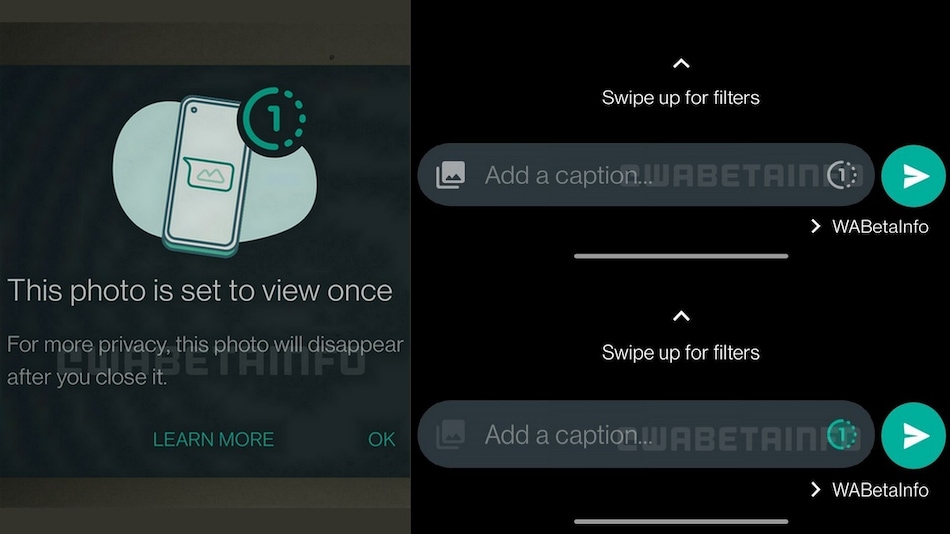 WhatsApp is reportedly testing a new privacy feature that lets users send media that disappears after the receiver has seen it. The ‘view once' feature has been rolled out to some beta testers on Android with version 2.21.14.3. It works similar to disappearing messages, except there is no time window for expiry and the photos or videos automatically disappear when the receiver has viewed them once. As of now, there is no information on when the ‘view once' feature will make it to a stable version of WhatsApp.

The Facebook-owned instant messaging service added the disappearing messages feature in November last year, and it now seems to be working on something similar for photos and videos. The 'view once' feature was spotted by WhatsApp update tracker WABetaInfo on Android beta version 2.21.14.3. When a photo or video is marked as ‘view once' while sending, it will automatically disappear from the receiver's phone after they have seen it.

The option shows up when attaching a photo or video in the space where you add a caption. Simply tapping on it enables ‘view once' and you will be notified when the recipient opens the sent media. However, if you have read receipts turned off, you won't be able to know if and when the recipient has seen them. As of the WhatsApp beta version with the feature, the publication says that taking screenshots is still enabled for these ‘view once' photos and videos, which means that the recipient can take a screenshot of the media before it gets deleted.

‘View once' on the WhatsApp beta version works with both individual chats and groups. You can see whoever viewed the media in the group info. Those who are not part of the beta and do not have this feature will only be able to receive photos and videos marked as ‘view once' but not send them.

As mentioned earlier, this feature is only available to select beta testers on Android and there is no public release date for it yet. WABetaInfo says iOS beta testers will be getting the ‘view once' feature soon.

Apple is Asking Some Employees to Wear Police-Grade Body Cameras at Work to Prevent Leaks: Report