WhatsApp Announces Stickers Rollout, Will Be Available to All Android, iPhone Users Over 'Coming Weeks'

WhatsApp now lets you send stickers to your contacts

WhatsApp on Friday announced that stickers will be rolling out to Android and iPhone users over the coming weeks. We were able to see the features on stable iPhone version 2.18.100, however, Android v2.18.327 didn't yet have it. The company has also detailed how users can create their own sticker pack apps. However, if you're an impatient Android user, and don't yet have the functionality, you can try WhatsApp for Android beta version 2.18.329 or higher versions - we see the functionality on v2.18.330 as well.

The introduction of stickers comes after months of anticipation and some initial rumours and leaks. Alongside giving a handful of default stickers, WhatsApp has provided a dedicated Stickers Store from where you can download new sticker packs for free. There are 12 sticker packs provided by WhatsApp. Additionally, there is a link to download distinguished sticker packs directly from Google Play. You can also use stickers directly from the WhatsApp Web after you'll get it on your smartphone.

"From emoji and camera features to Status and animated GIFs, we're always looking to add new features that make communicating with friends and family on WhatsApp easy and fun. Today, we're excited to introduce a new way for people to express themselves with stickers," the company said in a blog post.

To use a sticker in one of your chats, you need to tap the emoji button from the chat bar and then tap the stickers icon from the bottom bar. There is there a history tab available to show all the previously used stickers in one place. Similarly, there is a favourites tab that includes all the stickers that you've marked as favourite by pressing the star option after selecting your favourite sticker in a particular chat. WhatsApp has also provided a sticker category tab from where you can select the available stickers. Furthermore, there is a plus button that takes you directly to the Stickers Store. 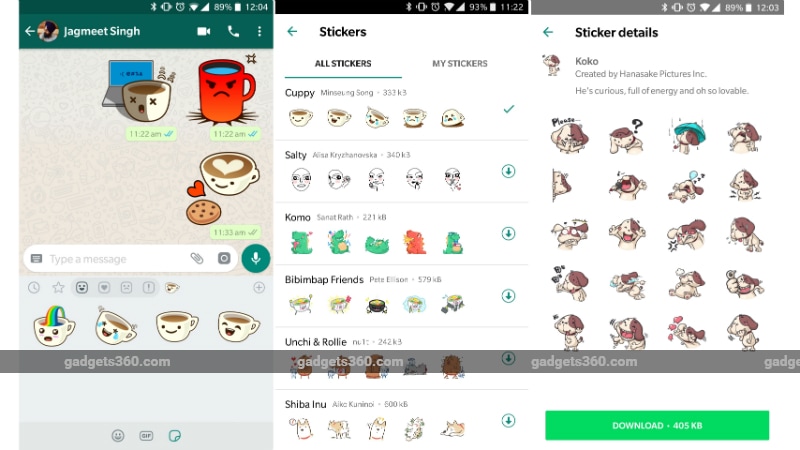 If you don't want a downloaded sticker pack, you can remove it directly from the My Stickers tab available on the Stickers Store. You can also rearrange the downloaded sticker packs by holding the button available at the rightmost corner of the sticker pack. Users will also be able to create their own sticker apps for WhatsApp, to publish on Google Play and the App Store. Full details on how to do that have been provided by the company.

Apart from giving a way to have a collection of stickers to communicate with other users, WhatsApp has provided you with a way to send grouped stickers. You only need to send multiple stickers from your device and those will be available in the grouped form on the recipient's device. This looks similar to the photo albums available on WhatsApp that come once you send multiple photos at once.

To get stickers, you need to have WhatsApp for Android beta version 2.18.329 or later. You can download the latest beta directly from the Google Play beta programme or in an APK file form via APK Mirror.

It is worth noting here that WhatsApp stickers can also be received on an iPhone after downloading However, we weren't able to spot the ability to send stickers using the latest WhatsApp for iPhone. The rollout was first reported by WABetaInfo, which added that apart from WhatsApp for Android beta users, WhatsApp for iPhone version 2.18.100 users also have the functionality. In our testing, while that version received stickers, it didn't have the ability to send them. That should change soon. WABetaInfo adds that users will be able receive stickers as far back as Android version 2.18.310.

Prior to the fresh update, users were able to send stickers on WhatsApp using third-party keyboards such as Gboard. But those stickers were sent as an image. Therefore, the new change is likely to encourage users to send stickers alongside communicating using voice, video, text, and GIFs on the instant messaging app that has over 1.5 billion users worldwide.

Facebook formally revealed the arrival of stickers on WhatsApp back in May, following the announcement of group video calling support on the instant messaging app at the F8 developers' conference.