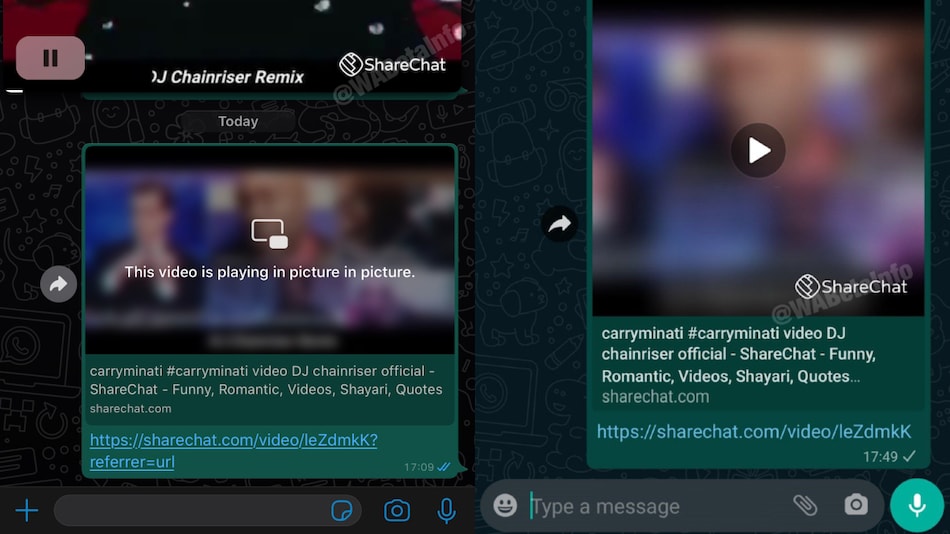 WhatsApp is reportedly rolling out ShareChat video support for Android and iOS beta users. All users on WhatsApp v2.20.81.3 beta for iOS and WhatsApp v2.20.197.7 beta for Android can watch ShareChat videos in-app through a floating video, similar to how it works for YouTube and Facebook video links. Similarly, the latest WhatsApp beta for iOS suggests that the social messaging giant is working on the ability to allow user customisation of wallpapers in chats. This means that once this feature is live, users will be able to enable different wallpapers in different chats.

WABetaInfo reports that WhatsApp is enabling support for ShareChat video in its most recent beta versions for Android and iPhone. The tracker notes that the feature may not be available for everyone immediately, but within 24 hours, the user will be able to use it. As mentioned, the feature is reported to be working on WhatsApp v2.20.81.3 beta for iPhone and WhatsApp v2.20.197.7 beta for Android.

This support brings the possibility to play videos shared on ShareChat within WhatsApp. Once a ShareChat video is shared on WhatsApp, a video box with the play icon will be shown in the chat. Once you press on the play button, the video would start playing in picture-in-picture mode within WhatsApp.

WABetaInfo has also digged up all the new things inside the latest WhatsApp v2.20.90.21 beta for iOS. The new beta suggests that WhatsApp is working on a new Multi Wallpapers feature. This feature is under development and will reportedly appear for everyone in a future update. It will allow users to use different wallpapers in different chats. Users will also be able to choose different wallpapers when switching the system theme. The Multi Wallpaper feature will also bring the ability to adjust the brightness of the selected wallpaper. There is no word on when this feature will be rolled out for stable version users.

In this beta, WhatsApp is also updating their localisations about end-to-end encryption, to include the mention of status updates. WABetaInfo also notes that the beta version implements some general bug fixes.