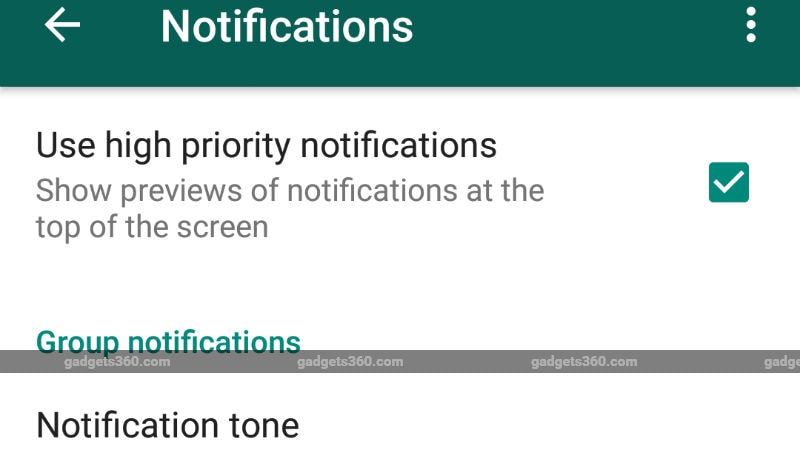 The WhatsApp High Priority Notifications work similar to the Pinned Messages, which was launched earlier

WhatsApp for Android has added yet another new feature with its new beta update, while a separate feature has been added in the public version. In the latest WhatsApp beta version, the app has added 'High Priority' notifications that will enable users to manage push notifications better. It is similar to the pinned chats feature that WhatsApp had rolled out last year. WhatsApp has also separately launched a new 'Dismiss as Admin' feature for its iPhone, Android and Web apps. These are the latest in a string of new features launched on the world's most popular messaging app.

First spotted by WABetaInfo, WhatsApp has rolled out the High Priority notifications for Android beta testers. When a user enables this feature, incoming notifications can be pinned to the top of the smartphone's notification centre. The option can be applied to private as well as group chats. Gadgets 360 has been able to verify the new feature is currently available in the WhatsApp version 2.18.117 on Android.

Users can access the High Priority Notification feature by going to the Notifications Settings menu. Notably, if your smartphone has other applications that have a similar feature, the notifications should be shown as in a chronological order.

Coming to the 'Dismiss as Admin' feature, the feature is only aimed at WhatsApp groups. Also spotted by WABetaInfo, it enables group admins to demote other admins. Earlier, group administrators had to remove other admins to demote them. But, with the new feature, they can just be demoted to a member without being removed. You will be able to locate it in the Group Info menu.